It was the best of times, it was the worst of times. Just another day at work. Jeff sat at his desk, waiting for his laptop to boot. A sunny Wednesday morning with hardly any traffic snarls, Jeff had breezed into the office early as he always did. He scanned his emails and got down to work right away.

A high potential employee at a mid-sized IT firm, Jeff demonstrated all the right traits: he conceptualized new strategies, took the initiative to execute them well, was highly involved in mentoring his team members, and was generally the first choice of his superiors to work on high priority projects. Well-liked by his peers and managers, Jeff had a great professional track record to boast of.

So later that morning, when his boss invited him for a ‘talk’ in his cabin and opened the conversation with a “What do you plan to do next?”,  Jeff was unprepared in how to respond.

Now you might wonder, what’s so difficult about this question? Most of us would know what we’d like to have – a new role, a challenging assignment, perhaps change teams, departments or even companies. We’d also know the underlying reasons – better salary, better opportunities, change of location and more. As competent individuals who are good at what we do, we deserve what we ask for.

But what if your organization’s priorities have changed? In the new scheme of things, your skills are no longer needed. The change in priorities could be due to anything – technology, process or simply political. Your competencies don’t count, your ability to get things done doesn’t matter, your knowledge and expertise become inconsequential.

When “What do you plan to do next?” assumes a negative shade, one that threatens your carefully nurtured professional existence, what do you then do?

The age of AI and the inevitable automation means questions like these are likely to become more frequent. The question we need to ask ourselves then is, “How prepared are we to change, adapt, or pivot?”

If we ever found ourselves in a situation like that of Jeff’s, what would be our initial reaction? What would we do next?

Typically, we’d reach out to trusted mentors, friends and family. We’ll go on job portals such as LinkedIn or Monster to update our profiles, look for opportunities, and connect with recruiters.

But who can really understand your professional journey as holistically and as intimately as you do? The highs, the lows, aspirations, what excites you and what you value. You, a composite of attitude and aptitude exclusive to you, what makes you unique?

Only you can answer best.

In a world, where anything and everything can be counted as data, how do you make sense of the noise? Be it job portals, social media, or sites that you follow – every place is a source that generates, with increasing frequency, more data than you can possibly go through or comprehend.

How do you detect the right signals that make sense to your career and to your life?

How does one stand out in a world that’s increasingly viral, aspirational and fleeting?

Instead of searching for signals buried in abundant noise, what if you were to flip the whole concept? What if you shifted your focus to generating signals?

Wouldn’t this be the best way to meet glorious uncertainty head-on? Then again, what could be the alternatives? No definite answers exist.

What this does underscore is how little we really know about what might work and what might not.

While we all understand the importance of agility, the end state is often uncertain. Resilience and the ability to pivot have become critical.

Let me give an example –

Increasingly, companies are moving to the public cloud. By 2025, 80% of a typical organization’s infrastructure is predicted to be managed by the likes of Amazon, Google and Microsoft. Even highly regulated industries such as banking, financial services and healthcare are strongly mulling over or have already begun to adopt this shift. What happens to the thousands of in-house jobs?

There are numerous such examples, cutting across functions and organizations, of roles that will be completely redundant or extinct.

3As – Aware, Accept and Act

To meet uncertainty of such magnitude, the 3As framework, can be a powerful focusing tool. While intuitive at first glance, it demands deep mindset and behavioural shifts.

So, where do you even start? 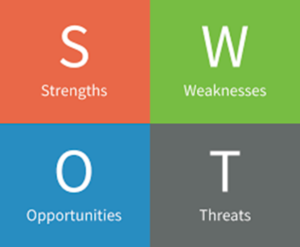 Businesses performing SWOT analysis when devising strategies such as entering a new market, competing with incumbents, new entrants and so on, is commonplace. A rare instance is when departments and teams perform a SWOT analysis on themselves.

In my last role, I was heading Market Research for RBS. To build greater awareness within my team, I asked my team of research analysts to do a SWOT Analysis of the work we did. The outcomes were interesting. While the team identified many strengths, it also became acutely aware of the threats facing itself. Digitalization of some of the core processes and paid research sources could easily put the group in an existential crisis mode. A highly possible reality, this was not something the team would’ve thought of, let alone arrived at, had it not been for the collective analysis.

Rarer still is, when individuals perform SWOT analysis on their roles, their career journey so far.  I can say from personal experience, for such an exercise to yield powerful results, it should involve an ability for deep introspection coupled with an understanding of the macro details.

The rapid pace of automation means we should be able to take a step back and assess whether what we do, either in parts or in the entirety, fall along where on the two axes –

It’s a given that the nature of your job will change quickly, your company will transform swiftly — most of it would be uncontrollable, wrought by external forces.  That you are regarded as an expert or a high potential individual today wouldn’t necessarily insure you from the future.

SWOT analysis’ help zoom your attention on the ‘controllables’. How you’ll plan, what you’ll choose to focus on, how you’ll respond to the changes are all within your control, controllables we’d do well to think of.

Skills of the Future

According to a McKinsey report, 45% of the work that we do today, can be easily automated even with current technologies.

Even if that isn’t the case, the exercise should still spur you on to research what are the emerging trends, and identify what skills do the new and exciting roles demand.

Speaking of which, skills can be broadly of three kinds –

Technologists are typically interested in honing their technical skills such as programming, technical design and so on. Domain experts possess in-depth knowledge of an industry or function such as investment banking, capital markets, payments and more. Then there are Techno-functional experts who combine the best of both worlds, technology and domain, with a major focus on solving business problems.

Most employees are expected to have soft skills such as communication, collaboration and teamwork. For a long time, employees with excellent technical skills or with a solid domain understanding were regarded as indispensable. People would get promoted to management because they were technically or functionally competent. It was assumed that either they were born with or would automatically develop skills such as the ability to lead, mentor and inspire their teams.

A few years back, when I was in business school, we had a session by a guest speaker, giving a talk on “creative thinking”. Most students chose not to attend, dismissing it as “just some soft skill”.

But all that is set to change.

If recent research is to be believed, AI has the potential to automate most tasks performed by programmers today, with a few sources claiming that in the next 20 years, AI will completely replace human coders.

But we don’t have to wait for that kind of a future. To quote LinkedIn’s CEO when he appeared on CBS last year, “Skills gap for interpersonal skills (including communication, reasoning, and team coordination) is three times the size than that of software engineering”.

While technical and domain skills would continue to be important, skills such as creativity, empathy, ethics and perseverance would assume a never-before-seen prominence.

It’s tempting to dismiss these as common knowledge, known to all. Yet, only a few really understand that soft skills pretty much power everything: from ideating, creating, pivoting to sustaining businesses, networks and relationships.

And just like hard skills, soft skills are developed with persistence, practice and experience. AI’s progress might just be the spark that’ll compel us to value the skills that propelled humanity to be the strongest species.

Did you know that jobs such as app developer, social media manager, cloud computing specialist and big data analyst have all emerged in just the last 10 years? The popularity of Apple’s iPhone and Google’s Android led to app developer becoming a highly-sought after role, one that today most companies cannot imagine being without. What might have seemed real only in sci-fi has already started to become a reality with roles such as driverless car engineers and drone operators. Rising environmental concerns are leading to the demand for sustainability engineers.

What this proves is that agnostic of the industry you are in or the technology you are adept in, it’ll be difficult for anyone to predict with 100% accuracy what the most sought-after jobs in the next 10 years would be.

This doesn’t mean we can’t do anything about prepping for the future.

On the contrary, understanding the emerging technologies and skills is a prerequisite to identifying your focus areas. The obvious question then would be, given the plethora of trends and information, how do you even get started?

In the second and final part of the series, we’ll explore how you can win with data and what success in a digital world would mean.