Total football is a tactical theory in soccer where any outfield player can take over the role of any other player in the team. It was made famous by the Netherlands national football team in 1974, when they reached the final of the FIFA World Cup.

However, Jack Reynolds, who managed Ajax three times between 1915 and 1947, laid its foundations and it has continued to be developed.

Total football could be described as ‘organized chaos.’ Any player can move into another’s position. Another team member replaces a player who moves out of position. In this fluid and flexible system, no outfield player is fixed in a predetermined role. Anyone can successively play as an attacker, a midfielder or a defender. The only player that stays in position is the goalkeeper.

The aim of total football is to confuse the opponent.

The traditional way to play soccer is simple: a goalkeeper, a line of four defenders, a line of four midfielders and a final line of two strikers. The ball is passed forward from line to line so eventually, the strikers can kick the ball into the goal. Total football blew this system out of the water.

There are clear parallels between total football and adaptive leadership teams, which we will explore further.

The Adaptive Leadership Team’s Model below illustrates what teams have to undertake to become adaptive teams. 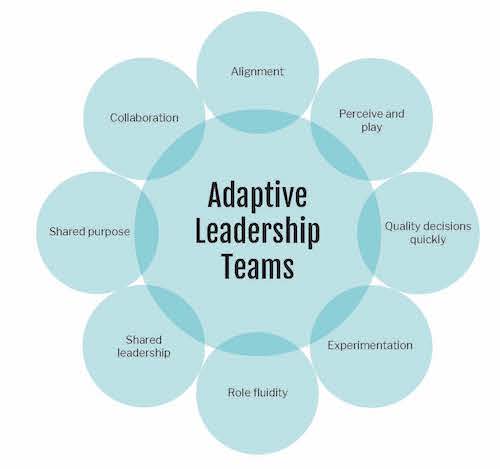 Just like soccer teams, organizations have to have adaptive leadership teams if they are to beat the opposition and win the competition.

They have to align around a common goal, perceive what is happening outside the organization and respond accordingly. Sound decisions need to be made quickly and teams will experiment to discover what works and what doesn’t.

There is role fluidity and anyone can play in any position depending on what is required.

My next posts will explore further aspects of the Adaptive Leadership Team model.