A working paper to promote further discussion and awareness for corporations to implement Strategic Corporate Innovation Management™.  This article will illustrate how a Strategic Corporate Innovation Management™ [1] system can generate shareholder confidence[2] through the continues and timely introduction of newly anticipated inventive solutions that will successfully be adopted by a specified target market.

In this context, shareholder confidence is the result of a positive perception about a corporation, where the acquisition of shares is based on the expected or predicted financial performance of the corporation in the foreseeable future.

Tesla Motors’ historic share price was analyzed in comparison with product release dates as a case study. It was possible to observe from the “share price vs corporate innovation” graph that shareholder confidence increased just before new inventive solutions were launched into the market. It was also observed that in order to sustain the share price value and market capitalization, it was important that the market successfully adopt the new inventive product as well.

As an additional benefit from this approach to deliver shareholder confidence through corporate innovation, the corporation itself will grow organically.

Most corporate executives strongly believe that shareholders only think in quarterly and annual financial performance reports, and do not care about a new breakthrough or disruptive innovations to be launched by corporations and how it will be adopted by the new market in the near future.

This implies that corporate executives prefer not to allocate an adequate budget or the necessary resources towards the development of a well-founded Strategic Corporate Innovation Management™ System to become a core competence of the corporation (Prahalad and Hamel, 1990). Not surprisingly, this explains why approximately only 6% (Christensen et al., 2016) (Hamel and Tennant, 2015) of corporate executives are satisfied with their corporate innovation performance.

With inspiration from Prof Clayton Christensen’s research, we know now that “sustaining innovation” (also known as “incremental innovation” or “performance improving innovation”) or “efficiency innovation” can only increase corporate profitability in the short-term to meet set shareholder expectations since it does not create any new markets. (Christensen and van Bever, 2014)

The only option to ensure corporate growth (and job creation) is either through “radical innovation”, “breakthrough innovation” or “disruptive innovation” that will enable organic growth from within the corporation to launch new technologies, products to new markets. (Christensen et al., 2019) (Mezue et al., 2015).

The concept of “market innovation” is where new markets are being developed through the lens of “Jobs-to-be-Done” theory. (Ulwick, 2017) (Christensen et al., 2016) (Adams and Burleson, 2018)

Therefore, Strategic Corporate Innovation Management™ as a core competence of the corporation is currently the only available option to deliver organic growth as a competitive advantage that can generate shareholder confidence.

The current challenge is to convince CEO’s and board members to significantly supplement their short-term M&A activities with a long-term corporate innovation growth strategy. This article will attempt to do this by analyzing the innovation and financial performance of Tesla Motors Inc.

No corporate executive can deny that Elon Musk is considered to be one of the entrepreneurial geniuses of the 21st century, who accumulated enormous wealth from his own doing. Elon Musk even once suggested in a shareholder conference that he prefer shareholders who purchase shares (or stock) Tesla Motors for the long-term, from which one can surmise that he is primarily focused on delivering long-term innovations.

Tesla Motors Inc. was ranked the 6th “Most Innovative Company of 2018” by the well-known Boston Consulting Groups’ (BCG) annual ranking report. Thus, there is no doubt that Tesla Motors Inc. is one of the most innovative corporations in the world.

The proof is that Tesla Motors Inc.’s share price grew from the initial public offering (IPO) price of US$17 per share in 2010 to the latest share price (as of June 29, 2018) at US$342.95 per share, a 1,889% increase in value (Investopedia). This is phenomenal growth for a corporation that builds physical products, versus non-physical digital platforms.

Analyzing Tesla Motors Inc.’s historical financial growth metrics with revenue (sales) and earnings (profits) against strategic corporate innovation (as organic growth through the anticipated diffusion and adoption of new products to be launched into the market), the following paragraphs and financial graphs (see below) will respectively discuss and illustrate how Tesla Motors Inc. accomplished this level of value creation through (the lens of this article with) Strategic Corporate Innovation Management™ and the generation of shareholder confidence, which subsequently will increase share price and eventually sustain market capitalization growth.

Analyzing Tesla Motor’s historical share price since 2010 (see graph below), one will find two significant “spikes”, the first started early Q1 2013 and the second started Q4 2016. If revenue grew at a fairly stable pace while the financial losses also had fairly stable curves, what could have caused these spikes within the share price graph? 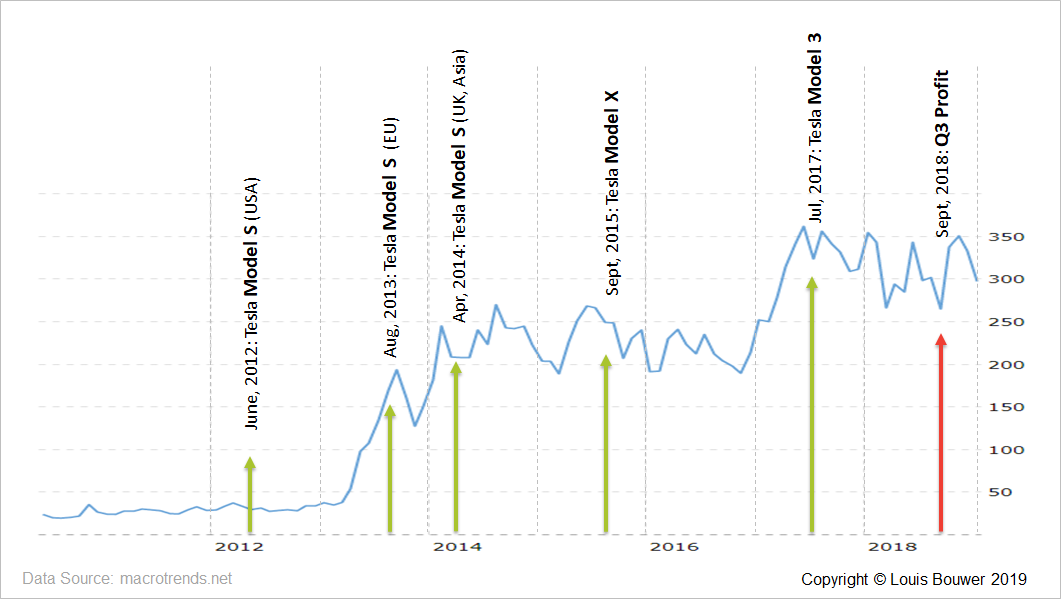 Thus, how did Tesla Motors Inc. accomplish such exceptional share price growth “spikes” without any significant net profits (earnings) or revenue growth without M&A activities? In fact, Elon Musk is known for driving organic growth through innovation where he develops everything throughout the value chain.

In order to understand this phenomenon, a non-financial and an invisible metric “Corporate Innovation” was brought into the analyses as an independent variable to add more insight into this phenomenon.

From a Corporate Innovation perspective, Tesla Motors Inc. introduced (or unveiled) their products to the market as follows (as indicated on the share price graph as well) (Source: Wikipedia):

From a Corporate Innovation perspective, Tesla Motors Inc. launched its products into the market for sale as follows (as indicated on the share price graph as well) (Source: Wikipedia):

With the launch of the very first Tesla Model S in the USA, shareholders were still cautiously optimistic about the adoption of this new product for a new market.

The share price graphs also spiked from Q1 2015 to Q2 2015 with the anticipated launch (innovation diffusion) of the Tesla Model X into the market (innovation adoption).

The second significant share price “spike” was with the anticipated launch (unveiled in Q2 2016 and introduced to the market in Q4 2016) of the Tesla Model 3. Thereafter, the share price was fluctuating around the US$300 per share mark.

Corporate executives must maintain shareholder confidence if they want to increase share price value and sustain market capitalization growth. The solution is to implement a Strategic Corporate Innovation Management™ System that can deliver new unique solutions to the market in a predictable, repeatable, profitable, sustainable and scalable manner.

An additional conclusion from this research was that the behaviour of shareholders appears not to be that much different from Venture Capitalists or Angel Investors. It suggests the biggest difference is mostly the preference in the level of liquidity of private vs public shares.

[1] The Strategic Corporate Innovation Management™ Systems was developed by the author during his PhD research.

[2] Although the author does not support Shareholder Value Capitalism, it is, unfortunately, the current ecosystem corporate executive has to deal with. The author anticipates a shift to Customer Capitalism through Strategic Corporate Innovation Management™ during the new forthcoming industrial revolution.