I’ve had a bunch of different jobs, and I’ll be honest: by this point, about 13 years into working, I oftentimes have no idea what strategy even is. I know that senior leaders of companies typically have a couple of big meetings (“off-sites”) per year and they hammer out some “go-to-market” strategies and the like — although those are often created in a vacuum, away from the people who actually have to execute on the ideas — but at most jobs, daily tasks seem to matter way more than any concept of strategy, even for senior executives.

This is the rubber-road aspect of all this: there’s supposed strategy, which is essentially long-term thinking or visioning. And then there’s execution, which is how you actually take the strategy and turn it into revenue, growth, and profits.

You need both: A great strategy without execution is one of those ‘tree falls in the forest’ moments, and great execution without strategy is just a bunch of people running around thinking they’re doing great when nothing is tied to a long-term goal (also known for many as “The Temple of Busy” or “The Cross”).

Here’s the rub, though: are executives capable of understanding both? 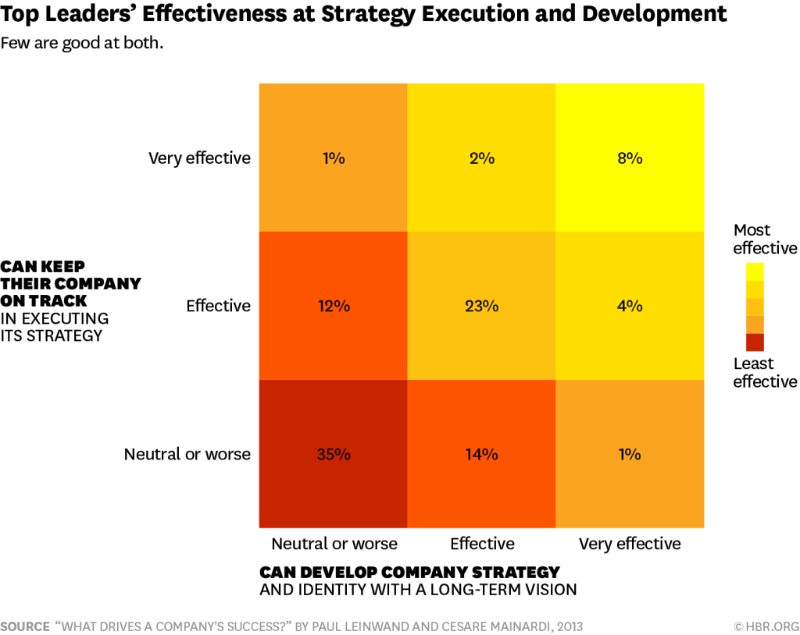 If you look at that chart above, from a Harvard Business Review article soberingly titled “Only 8 Percent of Leaders Are Good At Both Strategy and Execution,” the answer would be no. In short, well, read the title. Out of every 100 leaders, give or take 8 know how to balance the two. That’s a terrible friggin’ ratio, and leads some belief to the idea that any company who generates a bunch of revenue has a certain percentage of accidental luck at play.

You need to remember something basic here: even though you might work in a company where you think all your senior leaders are total idiots, they’re not. They’re probably very smart, driven people. What actually happens is that not everyone who becomes a senior leader should be a senior leader — think “Peter Principle” among other things — and that starts to chip away at the foundation.

At the most basic level of human existence, everyone fears incompetence. No one wants to be seen as an idiot, a dolt, a doofus (is that still a word?), or worst of all perhaps — a fraud. Senior leaders are people too. They fear incompetence, and big-time.

What do you do when you fear incompetence?

You stick to the things you know.

So if you’re “a finance guy” and came up that way, you stick to the numbers and reporting those and breathless analysis. Here’s the problem: things contracted at your company, and now you’re managing a slice of Operations. That makes you nervous, though. You’re not an “operations guy.” So you kind of ignore that and focus on what you do know. In eight months, your CEO will ask you why Operations “isn’t making numbers,” and rather than answer that question, you’ll throw some finance numbers right in his grill.

This happens all the time, and it happens everywhere. People want to be viewed as successful — we live in an achievement culture, after all — and the easiest way to be seen as successful is to cling to what you already know, as opposed to learning new things. Learning new things makes you better and more well-rounded, sure — but it’s also incredibly scary and you might show some incompetence as your learning curve ramps up.

So that’s reason No. 1: protecting feelings of incompetence.

Reason No. 2 is what I said way above: deliverables, or tasks, murdered strategy. We all love to be busy. “Strategy” doesn’t make you busy, really. You talk about it a couple of times and those are deep-dives, but “strategy” by definition needs time to play out. “Execution,” though — that shit makes you busy, and that’s the real goal of a lot of workplaces: replace “true purpose” with “I have a lot of tasks, so I must be important!”

No joke, by the way: I used to work with this guy. If you ever asked him how he was doing in the hallway or something, he’d yell “I’m executing, baby!” There are people like this in the world.

How can we align strategy and execution better?

The HBR article gives a bunch of BS buzzword phrases like “turn the strategic into the everyday.” That makes a ton of sense, but if you said that at a meeting, the entire room would shift 87 degrees from all the eye-rolling. It just sounds like corporate double-talk.

If you want to actually align ‘strategy’ (long-term) with ‘execution’ (day-to-day), here’s the basic framework:

It gets dicey in those last two bullets, because most companies have some whitewash buzzword crap as a mission/vision, and in reality all the senior leaders are holed up screaming “Make more money!” The problem is: out of every 5 employees, maybe 1.8-2.4 are revenue-facing. So … if the goal is to make money and only to make money, how do you motivate those other 2-3 of every 5 employees who can’t contribute to that ‘strategy?’ (By the way, I once heard a C-Suite guy say his company’s strategy was making money; um, that’s not a strategy, that’s an outcome.)

Realize that ‘strategy’ is typically going to be protected and held by the most senior people, and that’s fine. But for a ‘strategy’ to work, it still needs to be ‘executed’ on, and that happens down a chain. Strategy and execution are different. They happen — or rather, they should happen — at different levels and via different channels.

But for either to be effective, they need to inform each other: people ‘executing’ (like my friend above) need to understand how that’s tied to ‘strategy,’ and people ‘strategizing’ (at their ‘off-site’) need to understand how it will be executed upon day-to-day for maximum results. It’s that simple, although much more complex to actually achieve.

Customer Engagement
5 Strategies for Mid-size CPA firm websites to drive revenue.
Data & Analytics
Predictive Analytics: The Command to Forecast Who will Connect, Purchase, Gain or Drain
The Case For Digital Transformation
Top Posts of 2019
Learn from peers, thought leaders and expert practitioners for the best chance of success.