Profit is the very reason for the existence of companies. They define a global strategy called a business model on which they base themselves to create value. The increasingly complex environment is forcing them to constantly redefine this business model.

Indeed, the opening of economic borders changes the rules of the game. There is now a multitude of players in a single market. These actors do not have the same constraints and must specialize in the field where they can obtain a comparative advantage. These constraints depend to a large extent on their geographic locations, the tax regimes and the regulations they must follow.

What we, unfortunately, tend to forget is that the creation of a company is first of all based on an idea. Indeed, day-to-day operating activities result in an ever-increasing dislike of all forms of innovation, as it is these day-to-day operations that initially ensure the operation of the business. But we are in a market economy where supply is greater than demand.

As a result, companies have no power over prices and are forced to gradually reduce their profits. This situation is not optimal for entrepreneurs who have an interest in standing out and maintaining competitive pressure. This is why some companies regularly release new product lines. As a result, the number of patent filings has increased by more than 7% per year since 2010. This leads to a decrease in product life and an increasingly unstable environment.

According to the Boston Consulting Group, this is a reinvention of the business model whose main objective is the analysis of customer needs and the questioning of strategies. From the examples of reality, we will try to highlight the role of the business model innovation between the success and the failure of certain companies such as Kodak, IBM, Apple and n’cloud.swiss AG.

Apple and IBM have managed to implement innovations and make huge profits. The explanation of this success can be found in the strategies used in their business models. IBM is often cited as an example for successfully changing its business model.

The company, which has been in existence for more than 100 years, has undergone several transformations to cope with the changing environment. In 1992, it is on the verge of bankruptcy and loses more than $ 15 billion in a single quarter. At that time IBM did not believe in client-server technology and had to make two drastic decisions. Firstly, a repositioning of its activities according to the skills it had.

Secondly, challenging and refocusing on the value it brings to its customers. In 2004, IBM sold its microcomputer part and decided to specialize upstream in the design and maintenance of software.

A few years later, with the arrival of Tablets and Smartphones, it was able to meet the needs of the market with a business model adapted to the expectations of customers. This change in business model has allowed IBM not to go bankrupt and, better still, to stay at the forefront of technology.

“Once you enter the Big Tent of Apple, it’s exceedingly hard to find the exit.”

Like IBM, the multinational Apple is seen as a good example of success of the business model innovation. Nobody could believe today that the company was also on the verge of bankruptcy just before the beginning of the 21st century.

When trying to understand the origins of their impeccable success following the return of Steve Jobs, it is easy to think that it is thanks to iPhone & Co that Apple has been saved. True, it is not wrong, but the revolutionary innovation that is behind its success is iTunes. With iTunes, the download of audio files is made extremely easy.

Once the consumer has downloaded thousands of songs on his iPhone or iPod, he is forced to stay at Apple otherwise he may lose the products purchased. Indeed, these are hardly transferable to a non-Apple brand product. Dan Tynan of PCWorld summarizes this strategy as follows: “Once you enter the Big Tent of Apple, it’s exceedingly hard to find the exit.”

IBM and Apple have shown us how to successfully implement an innovation in the business model. Unlike these two success stories, the Kodak case is the proof that it is essential to be constantly on the move in order not to miss the latest updates of the market. Who would have thought that a company that was over 100 years old and owned 90% of the American photography market in the 1970s could be in a state of bankruptcy in a few decades?

This is because, in the 80s and 90s, the company preferred to “play the security card” by continuing to manufacture the products that made its success and not take the turning point in the digital age. What should just be a “fashion” according to Kodak has become a real technological breakthrough within the market. Even if, afterwards, a lot of effort was made to make up for what was missed, it is because of this bad market analysis that the American giant failed to adapt its business model to change in its environment and that it had to file for bankruptcy in 2012.

n’cloud.swiss AG — From an IT consulting company to a cloud computing provider competing with Amazon AWS, Microsoft Azure & Co.

Swiss cloud computing provider n’cloud.swiss AG has its roots in the consulting sector. Founded as Netkom IT Services GmbH, the company presents an outstanding proven track record of 17 years of successful operations in various countries. In the early 2000’s the company operated mainly as a consultant in the field of IT-Strategy and Technology for some well-known large national and international companies.

In the following years, more classic IT- and virtualization projects were executed for SME’s. With the conscience that small and medium-sized enterprises were unable to afford an own datacentre infrastructure, the decision was taken to launch n’cloud as one of Europe’s first IaaS/SaaS cloud platforms.

In the following 7 years, the n’cloud product and service portfolio has been continuously developed and expanded into 12 different areas. Customers from different countries were enabled to assemble their own virtual office from the various packages and were no longer dependent on their own expensive IT infrastructures. 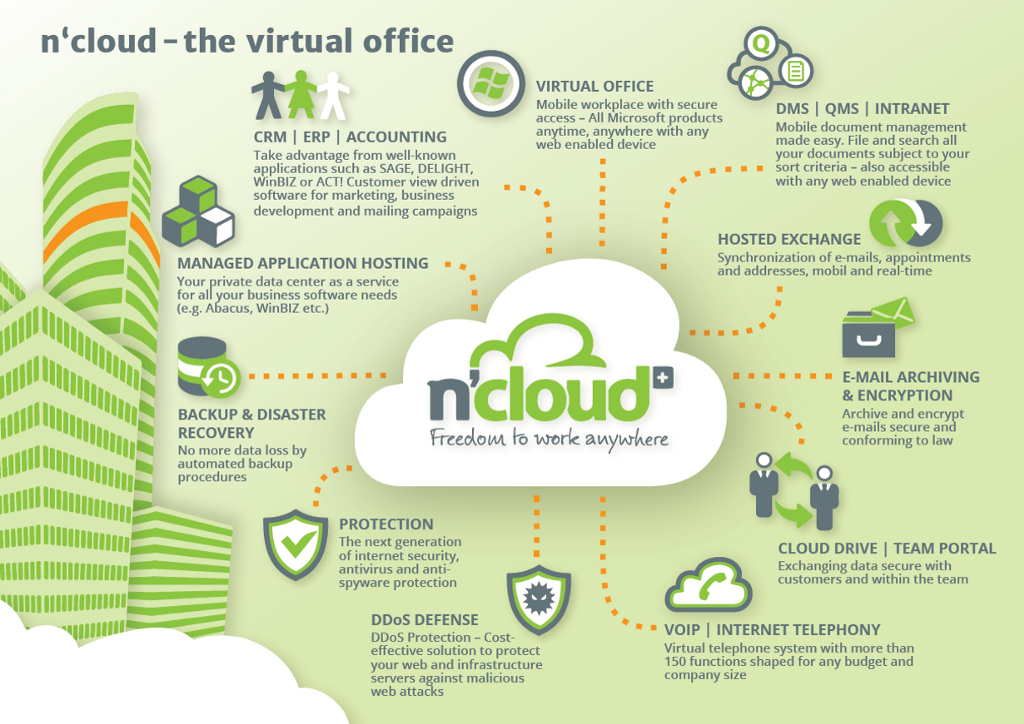 The indefatigable will to innovate of this ambitious company and the huge potential of the cloud computing market led to the launch of the next generation cloud platform n’cloud.swiss. The IaaS-, PaaS-, SaaS-platform is not only a new era in cloud computing but also a serious alternative to the well-known public and on-prem cloud platforms around the world.

The example of n’cloud.swiss underlines the importance of staying hungry and staying foolish as Steve Jobs once said. The fact that the company underwent several transformations since the day it was founded shows an outstanding affinity for the market, customers, competitors and opportunities. This is exactly how multinationals like Apple and IBM became the successful multinationals they are today, simply by staying hungry and staying foolish.