As a career strategy guy, my fascination with Culture stems from several pivotal experiences. Running the Enron business at Ogilvy in the late 90’s.

Safe to say they were some of my most driven, ambitious and explicitly “winner takes all” clients. Pesky rules and accounting principles weren’t going to stand in their way.

Discussing the launch of the iPhone with Nokia engineers in 2007.

They were largely unimpressed and, as history has shown, the impact that apathy had on the relative fortunes of both companies.

With all deference and abject respect to Peter Drucker, I think he might have mis-stepped on the “Culture eats Strategy” comment we’ve all seen a thousand times.

Culture IS Strategy and its definitely not about which one eats the other.

For many – myself included – there is a growing frustration and anger at the way many organizations still operate. The misguided or malignant treatment of our employees in pursuit of profit and maximizing shareholder value galls many who believe that our fellow humans deserve better.

And, ironically, research and empirical evidence shows that when we treat our colleagues like high-functioning, well-intentioned adults who just want to do a great job, they typically will deliver unprecedented innovation, unparalleled customer service and better business results.

BUT IT’S A SLIPPERY SLOPE.

Treating your colleagues like high-functioning adults and creating a culture where that happens, shouldn’t be conflated with creating an environment where smiles are a plenty and stress has been banished.

The role of Culture is to accelerate or advance the Strategy of the organization. Period. End of sentence. Culture, as the folks at Gaping Void eloquently state it, is the operating system of an organization.

Culture, and passionate culture advocates like myself, do a disservice to the advancement (and credibility) of the topic if we don’t make that link.

Worse, without showing that Culture is an accelerant of business Strategy, we play directly into the hands of those who flippantly dismiss Culture as the domain of foosball tables and feel good BS.

Perhaps the most binary example of this premise is the most valuable company in the history of the world.

Heaven knows Amazon regularly makes headlines for the abhorrent conditions warehouse workers are forced to operate under. Parking ambulances outside packing warehouses is deemed more efficient than dialling up the air conditioning. Having the Federal Government cover the short fall in workers’ salaries with food stamps is considered another efficiency. Ironically the same consumers delighted by Amazon’s low prices are actually subsidizing those food stamps as taxpayers.

Recently a colleague cheekily asked me how I could admire Amazon when their employer practises, and therefore their Culture, was so demonstrably exploitive (his words, not mine).

IN TRUTH, THERE ARE TWO ANSWERS TO THAT QUESTION.

One, by the premise that Culture IS Strategy, Amazon is a remarkably pure example of the symbiosis between the two.

Here’s a hypothesis – Amazon’s strategy, in many but not all verticals, is to remove any friction between a customer and their purchases. 1-Click, Prime’s free shipping, GO, Fresh and any number of their innovations are about removing that friction. Heaven knows, you could argue that Alexa (when it works) removes the friction of typing. Extending that thought, its easy to argue that human beings are actually the biggest point of friction in delivering on that strategy. We’re irrational, we get tired, we make mistakes, we demand vacations.  In short, we add friction.

Overly simplistic? Sure but there’s a case to be made.

Two, as this excellent article suggests, Amazon has never proudly proclaimed a noble mission to change the world.

Instead, Amazon has steadfastly stuck to the business of their business and hasn’t gotten caught flat-footed like many organizations who have said one thing…and then acted in exactly the opposite way.

If there’s one thing more galling than organizations and leaders who exploit or undermine their people, it’s organizations who use Purpose as a wafer-thin veil to obfuscate and deceive their customers and their employees. 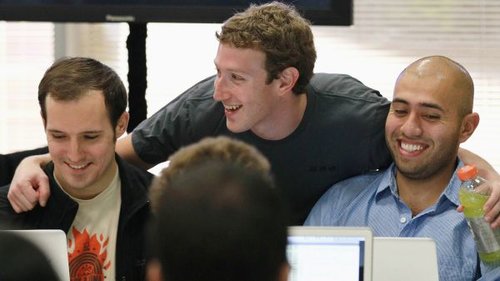 Mark Zuckerberg, Sheryl Sandberg and Facebook are perhaps the most glaring example. The noble pursuit of “connecting the world” has descended into one damning episode after another. While the ghosts of Cambridge Analytic haven’t yet been put to bed, a recent CNBC article highlights that Facebook has created a culture that borders on cult-like behaviour. The culture is so stacked against dissent, speaking up and speaking out that we shouldn’t wonder how decisions like the Cambridge Analytica one were made.

And if you’re looking for examples where bold Purpose statements belied the actual Culture of an organization, you sadly needn’t look very far. Detractors are quick to point to Google’s “Do No Evil” mantra and juxtapose that to the $90 million settlement to the co-founder of Android while he was being investigated for sexual harassment.

Ultimately, a Culture is at its most powerful when it brings clarity to how employees behave and make decisions within an organization.

The type of clarity that accelerates collaboration and reduces conflict.

The type of clarity that allows all employees to explicitly understand what their contribution is and why that contribution matters.

The type of clarity that accelerates delivering on your Strategy.

The type of clarity that Amazon seems to have in spades.

For a more humorous POV on Amazon, it’s strategy and its culture, I implore you to watch this episode of “Patriot Act” by Hasan Minaj. You’ll laugh, you’ll cry, it’ll be better than CATS.