In my last series of blogs, I explored the “Give It Up” model whereby true leaders need to move from a command and control style of leadership and towards one of delegation and trust.

Not only do leaders need to give up control, they need to become adaptive leaders and be able to chart a course when they cannot predict the outcome of their choices.

My Adaptive Leadership Model below illustrates what a leader has to undertake to become an adaptive leader. 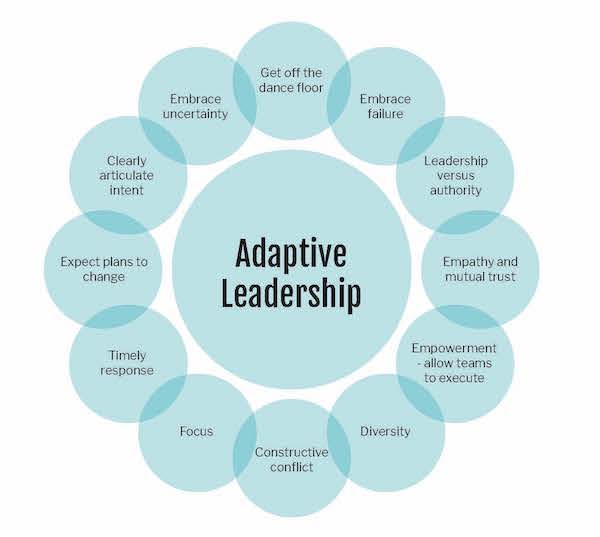 Adaptive leadership cultivates a diversity of perspectives. The leader considers divergent and diverse options and views ideas from employees before making important decisions. It is acknowledged that the knowledge of the whole is more powerful than the knowledge of the leader. This enables complex challenges to be addressed with multifaceted solutions.

The collaboration and involvement of employees in the development of the idea or option gives employees a sense of ownership and the knowledge that they are being recognized and valued for their contribution.

Some adaptive leaders encourage disagreement to ensure that assumptions are challenged.

Abraham Lincoln provides a great story about creating a diversity of perspective and encouraging or driving dissenting opinion. On the morning of May 18 1860, four men waited to find out who would be the next Republican candidate to become the president of the United States of America. Three, William Seward, Salmon Chase, and Edward Bates all thought that victory was theirs. Lincoln was not so confident. However, due to Lincoln’s strategic positioning, he was elected.

The other three, who had spent their lives working towards becoming president, were extremely angry. Lincoln was considered to be from the wrong side of the tracks. However, when Lincoln had to select his cabinet. He included these three adversaries. He knew that in order to lead the country successfully, he would need their collective knowledge, experience, and strengths.

He used the diversity of opinions and perspectives in the cabinet in order to run the country effectively. When asked why he had included such strong adversaries in his cabinet, his response was simple.

‘We needed the strongest men of the party in the Cabinet. We needed to hold our own people together. I had looked at the party over and concluded that these were the very strongest men. Then I had no right to deprive the country of their services.’

Leadership in the face of volatile, uncertain, complex, and ambiguous change has to be adaptive.

Adaptive leaders need to know when to operate in the fray, and when to get off the field and watch from the sideline.

They will embrace losing a game as a learning opportunity and the team will bounce back ready to play the next game. They will have empathy and be able to walk in another’s shoes to understand their perspective. Players are inspired to be accountable and make decisions.

Adaptive leaders expect and embrace change. It is their reality. The teams they build are dynamic and embrace change, and they channel any uncertainty into positive outcomes through collaboration and communication.

Adaptive leaders clearly articulate their intent and then let the players get on with the game. The players will ultimately win or lose the game.

In subsequent posts in this series, I will be exploring the additional elements of the Adaptive Leadership model.

Delivery
Defining “Digital Transformation“ with actionability in mind
People & Change
Ready to engage the ‘plug-in’ workforce?
People & Change
Millennials Make Their Mark in Health and Safety
Learn from peers, thought leaders and expert practitioners for the best chance of success.