Intuitively, fintech and blockchain technology merge quite well. After all, cryptocurrencies were the first use cases of the distributed ledgers, and crypto assets are, well, assets that can be traded on the financial markets. Still, this technology has much more to offer than cryptocurrencies. For instance, blockchain-based smart contracts enable an automated escrow that has numerous implications for the financial industry (see Wikipedia’s definition of an escrow).

Let’s see how smart contracts can transform the global FinServ, explore the major blockchain platforms, and check out several fintech startups that use this technology.

First, let’s examine the meaning of blockchain for fintech and the financial services.

There are different blockchain definitions that sometimes contradict one another. Skeptics usually say distributed ledger is just an inefficient database, while blockchain enthusiasts believe this technology will reshape the whole industries. Interestingly, both groups are correct to some extent.

So, what is blockchain?

Blockchain is a permissionless distributed database based on the bitcoin protocol that maintains a continuously growing list of transactional data records.

However, the word “blockchain” is generally used to describe all distributed ledger technologies, not just bitcoin-based implementations. For the sake of simplicity, we shall stick to that logic in this blog post. So, Blockchain = Distributed Ledger Technologies (DLTs).

Blockchain is a distributed database shared by multiple parties.

Here is the part where sceptics got it correct – blockchain is, in fact, a database. Still distributed ledgers enable blockchain-based smart contracts that are stored in a verifiable and permanent way, a trait that common databases do not have.

Once verified and written on the ledger, the transaction is practically set in stone. Transaction irrevocability has amazing implications for multiple industries including the financial services. So, that is the part where blockchain enthusiasts got it right.

The verification mechanisms can differ depending on the actual DLT implementation. Some of the standard schemes are proof-of-work, proof-of-stake, special notary nodes, Byzantine fault-tolerant (BFT) algorithms, and more.

Now let’s take a closer look at the smart contract concept, and how it can reshape the financial services industry.

Blockchain technology in fintech has several implications, and smart contracts are one of the most promising concepts. Smart contracts can potentially substitute numerous intermediaries, including legal advisors, brokers, banks, and more.

Here’s Wikipedia’s definition of this concept:

From this definition, we can derive the major advantages of smart contracts for fintechs, banks, and other financial companies:

An automated escrow is the most promising use case for smart contracts in the fintech domain. To put it simple, complex transactions require various third parties to get involved in the process. These intermediaries like brokers, banks, and lawyers increase the trust between transacting parties and balance their risks.

Consequently, every third party takes a fee for its services, hugely boosting transaction costs. An escrow is common in nearly any financial segment including banking, real estate, M&A, transfer of intellectual property rights, and many more.

Global transaction fees amount to tens of billions of dollars each year, which is an enormous opportunity for disruption.

Smart contracts are poised to become the driving force of that disruption. 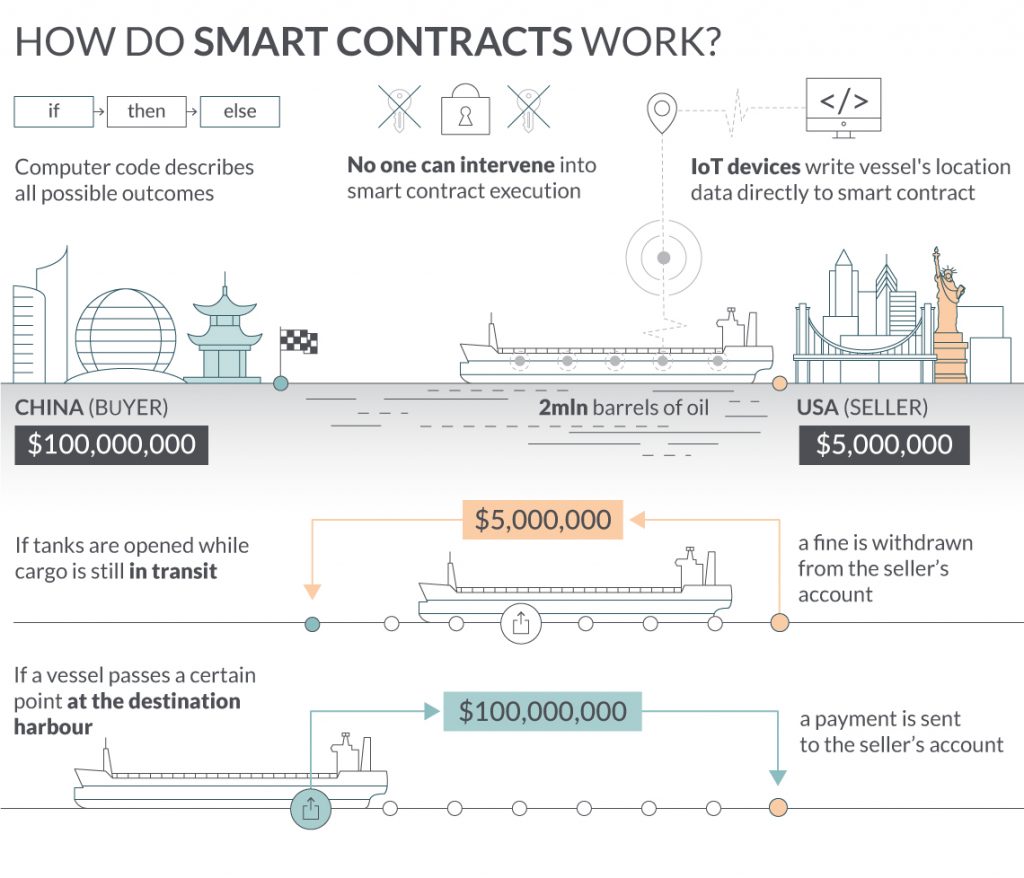 Blockchain-based solutions can practically eliminate the very need in intermediaries. Well, to some extent, of course.

A smart contract is merely a computer code that receives input states and executes commands according to a pre-specified set of rules. Roughly, when one instantiates a smart contract, the rules can no longer be changed. This means the peers cannot influence smart contract’s behavior (and, thus, cannot cheat).

Of course, this depends on the exact implementation of the distributed ledger. Some blockchains allow changing the rules of a smart contract based on mutual consent of all involved parties.

Comprehensive smart contracts are very similar to common legal contracts, as they strive to describe every possible outcome of a transaction. What sets smart contracts apart is that they enforce contract execution according to the pre-specified rules.

A comprehensive smart contract would describe every possible case after the purchase:

A smart contract describes what happens after certain possible events. This looks much like a common legal contract, but with a twist. Smart contracts can also enforce contract execution, eliminating the risk of cheating.

Similar measures can apply to the seller’s faults. Therefore, smart contracts can be more trustworthy that legal contracts and have a potential to substitute them altogether.

Trust is the key advantage of smart contracts over common legal contracts. Blockchain-based solutions are computer code that can be partially or fully executed or enforced without human interaction. They are not biased and are extremely hard to hack.

Of course, additional measures can further boost the credibility and security of the smart contract-based transactions. These could be:

In this post, we shall describe Corda in detail and give a brief description of the Ethereum Platform. Hyperledger Fabric has commonalities with these two, so it’s not worth repeating.

Corda is a private permissioned distributed ledger technology. It was designed specifically for the financial services industry and its aim is to incorporate the legal prose into a smart contract. In other words, R3 Corda targets smart contracts that will completely substitute legal papers.

R3’s fintech private ledgers do not rely on blocks, so, strictly speaking, it’s not a block chain technology per se. The information about every transaction (and every smart contact) is not shared to the whole Corda network of peers. Instead, transaction details are available only to parties that are directly involved in a particular transaction.

When a smart contract is initiated between two peers, each party provides its digital signature. If peers trust each other enough, Corda allows settling transactions with just these two signatures.

If there is not enough trust between the parties, they can plug in a special notary node. In that case, a notary node is required to provide validity consensus to validate this transaction and put it on a ledger. This process is called “notarization”. Notaries also provide uniqueness consensus to prevent “double-spends”.

Notaries are pluggable, so one could have several layers of notary nodes. A signature from each notary is required to validate a smart contract. Different notaries can use different consensus mechanisms.

Corda allows plugging in additional non-validating peers, too, like regulators and auditors. These entities don’t validate the transaction but can access transaction data reinforcing financial governance and transparency.

Ethereum Platform was the first technology to introduce smart contracts (or autonomous agents, as they Ethereum’s white paper calls them). Ethereum is all about public blockchains, and it uses Ethereum Virtual Machine (EVM) to verify and execute smart contracts. EVM is a network or nodes and miners that make sure no one cheats.

Ethereum has probably the biggest community and numerous samples that should make life easier for the developers.

Companies don’t necessarily have to rely on the existing blockchain technology like Ethereum, Corda, or Hyperledger. Instead, they can develop custom distributed ledger platforms that fit the unique needs of the niche they target.

In that case, companies have more control over the system and can design it according to a particular use case. Let’s take a look at some blockchain startups that followed that path and made a splash in the fintech community.

Distributed ledger startups have seen a generous inflow on venture capital during the last five, securing over $500,000,000 in Q4’17 alone.

Fintech blockchain companies are so plenty, it is nearly impossible to try to cover every one of them in a single post. Instead, we’ve selected eleven startups that create promising blockchain-based solutions aimed at various blockchain financial use cases.

This list is enough to see the diverse applications of the distributed ledger technology in finances.

Alchemy Coin is a peer-to-peer (P2P) lending marketplace built with the distributed ledger technology. The solution is similar to common alternative lending companies like RateSetter and the likes. Alchemy wants to connect lenders with borrowers directly, but with a blockchain-powered platform. Essentially, the platform tokenizes financial derivatives like collateralized debt obligations (CDOs) and allows investors to get dividends and interest rates on the derivatives they own.

Celsius Network is quite similar to Alchemy Coin, but with a cryptocurrency flavor. Users can lend money at 5% and take loans at 9% interest rate. Celsius keeps user’s crypto assets as collateral. Given the high volatility of cryptocurrencies, that could be a risky business for Celsius. Still, it is a smart alternative lending application that tries to bring cryptocurrencies and fiat currencies a little bit closer.

Circle is one of the best-known blockchain startups in the world. The company allows its users to send funds without transfer fees, both locally and abroad. Circle aims to make its financial app as easy and fun as talking to your friends on WhatsApp or Facebook Messenger.

Digital Asset created a Digital Asset Platform that allows business access shared records of data without reconciliation. This distributed ledger platform provides flexible a infrastructure that holds “the record of truth” shared between multiple regulated financial institutions. As this is a blockchain platform, it creates a secure, irrevocable set of records giving the regulators ultimate market transparency.

HumanIQ promotes financial inclusion and eases access to financial services for the underbanked population. The application has its own cryptocurrency that facilitates secure money transfers on a peer-to-peer basis.

Propy is a blockchain startup that helps people find property abroad. The company provides a comprehensive overview of each building they sell, as well as a detailed description of the neighborhoods. Propy uses blockchain to facilitate cross-border payments for the private property and to speed up title deeds issuance. Thanks to distributed ledger technology, each transaction is secure and inexpensive, while the title deed gets online in a matter of seconds after the purchase.

Rentberry uses smart contracts to simplify renting procedures for all parties involved in the process. The solution ties the rent agreement to a blockchain-based smart contract. The smart contract is self-executable, meaning contract negotiations, money transfers, and other actions are automated. As a result, property owners and tenants enjoy seamless user experiences while avoiding stress and saving time.

SALT Lending is an alternative lending platform that allows using crypto assets as collateral. The platform blocks borrower’s crypto assets and pays out a loan in one of the traditional currencies. The company follows strict Know your customer (KYC) and Anti Money Laundering (AML) procedures to prevent illegal activity and frauds.

SmartLedger has been on the news creating gold trading platforms and assembling mining pools for several crypto assets. Still, its fund management system that utilizes smart contracts is probably the most exciting implementation for the financial services industry. SmartLedger also built a Customised SmartLedger Development platform that should help insurance companies create own blockchain solutions.

TraDove set its eye on the B2B payment fintech segment, just like Ripple Labs or Currencycloud. The B2B strategy is rare among fintech startups, as they commonly target consumer markets instead. TraDove’s token called BBC allows corporations to buy and sell crypto assets fast, efficiently, and with much better transparency.

The number of blockchain fintech startups is soaring, while distributed ledger technologies slowly taking ground in the financial services industry. It will be interesting to see if this technology and smart contracts can live up to their expectations and transform financial ecosystem for the better.

We’ll see if fintech blockchain technology can reach the critical mass to actually take over this industry.