Change is intrinsic to the IT industry and its customers. And most of us, whether in business or government, are deeply focused on enabling business agility, whether through technology change, product innovation, software architecture, agile practices, modernization projects, role and skills development, etc. But the momentous decision of the UK to leave the European Union has prompted me to revisit my change models.

Clearly the scale of the implied change is very wide ranging, and the impact on government, industry, commerce and education sectors in the UK and some parts of Europe may be extraordinary, affecting core business and societal models like no other change, short of war!

How do we businesses, government departments, educational establishments and individuals make plans?

I suggest before you can even start planning, a model is needed to aid understanding of what’s happening, and where you are in the process. As it happens one of my colleagues just passed me a link to Jason Bloomberg’s blog on Architecting Change as a Core Competency [1]. This includes a model for understanding change, and in the table below I have taken the liberty to extend Jason’s model.

The model is not like a maturity model in which we are in one state at any point in time. It seems clear that many of us in the UK and Europe will be experiencing discontinuity (it’s unexpected, sudden and largely unplanned for), and chaos (the simple decision to leave the EU triggers an unimaginable number of potential consequences, for instance, there are evidently 40,000 pieces of UK and EU legislation that will be impacted) and lack of definition, (the arrangements will only emerge over time, perhaps over many years). The chaotic element is further amplified by the absence of anyone in charge and the number of parties (28 EU countries) to the current and any future agreement.

So given we have a major discontinuity with chaotic impact and very little definition of the approach, do we just metaphorically sit on our hands and do nothing until the politicians make some agreements? Already we see some large enterprises are indicating their likely strategy; commonly financial, telecomms and IT organizations making initial plans to relocate key parts of their business; either because regulatory requirements mandate operation in the EU, or standards such as Cloud data make it imperative to move data centers, or the EU digital strategy make it imperative that telecomms enterprises are located in the EU, or new EU borders require new, enhanced or multiple tariff and security management.

While these type of changes will happen over time, there are others that are urgent; many businesses are right now adjusting resources and prices to leverage or compensate for changes in demand caused by currency shifts. Tactical changes will usually be accommodated in existing systems; but more profound changes may mean significant change in the core business model over time. The model below is a very simple model and highlights the central things that may be subject to change. Modelers will recognize instantly that these “things” are core entities that generally “run the business” and generally endure while the core mission and objectives of the enterprise remain stable. And consequently, Brexit triggered changes may well have profound changes to the business model. 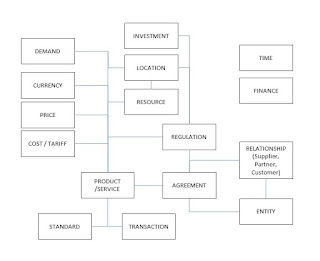 For many enterprises this change may well be an existential event. That existing systems will require such major change that radical modernization effort will be required. Perhaps enterprises have been delaying modernization of core, back end systems because the cost justification is not compelling – and for many that cost justification will now become overwhelming and urgent. What will be necessary however is for systems modernization (people, process and technology) to be carried out in a manner that the enterprise can continuously adapt because Brexit triggered changes will be happening progressively for the next two to (say) seven years. It’s time to start planning right now, so that as the regulatory requirements and trade agreements are framed the systems are in place to respond.

[1] Architecting Change as a Core Competency

IT veteran. Pioneer, researcher, publisher and consultant in software services and factories. Facilitator of enterprise modernization.