Last week I mentioned to one of my US based colleagues that I would be out of office for three days at the Irish National Digital Week (NDW16), taking the opportunity because the event was being held in Skibbereen, just a few kilometres down the road from my home office. He asked, “Surely an event of that type would be held in Dublin?”  And I replied, “Well there’s a story here that needs to be told; one that will have profound implications for business in Ireland and probably internationally”.

Skibbereen is a small market town in the South West of Ireland. The population is approximately 2000, although there’s perhaps several times that number in the immediate hinterland.  It’s not an easily accessible area, you get there by going to Ireland’s second city Cork, and then taking pretty dreadful roads for some 100 kilometres.  However, the general area is reasonably well known as West Cork, a remote but ruggedly beautiful part of Ireland beside the Atlantic, with peninsulas reaching out into the ocean attracting sailors, divers, kayakers, cyclists, walkers and artists from Ireland, the United Kingdom, America and Germany many who visit, some who make their home here.  A cosmopolitan populace that blends indigenous folk and blow-ins in a close knit community.  Think of Northern California but 5 degrees cooler.

Over the years numerous leaders in business, technology and the arts have moved to the area or established holiday homes. In 2015 some of these individuals together with local business people established an initiative using private investment to create a digital hub. Notables in the group operating on a pro bono basis include David Puttnam, well known film producer and Ireland’s Digital Champion, Anne O’Leary, CEO Vodafone Ireland, Ronan Harris, VP Sales & Ops Google Ireland and John Field, Director of local retailers.  John Field made a suitable building available, once a cinema and latterly a bakery, as the physical presence.  Vodafone, in the (ESB/Vodafone) SIRO partnership provided a 1 Gb network, for the hub building and the entire town.  In late 2015 the Hub building, named Ludgate after a 19th Century Irish designer of an analytical engine, opened coincident with the co-located 2015 National Digital Week event.

Last week, the NDW 16 event was once again held in Skibbereen, attended by some 1600 delegates from all over Ireland with 70 speakers and 2 arenas.  Speakers included big names such as Google, Paypal, Uber, AirBnB.  But what is really interesting about this event is that in spite of the “digital” theme, most of the sessions were about applications, people, collaborations and experiences.

West Cork, like most of Ireland has extensive farming interest.  A session that resonated with me was the speaker that showed an image of an obviously recent, top of the range model combine harvester, who quickly went on to show an even newer harvester image, asking the question, “why would I replace a great piece of machinery so quickly, particularly in an uncertain economic climate?” And he proceeded to show the direct cost benefit of the newer model that with GPS guidance and yield data analysis enables huge improvement in cropping precision, efficiency and yield.  I never did get to ask when the driverless combine would be available, but we can probably assume it’s not far away.  The speaker also commented that this level of technology is fully in production, available to and easily usable by farmers today, and doesn’t just collect big data, but integrates with farm management to instruct fertiliser, treatment and cutting programs.  The net effect is to de-skill the farm management task and improve the consistency and quality of outcomes. 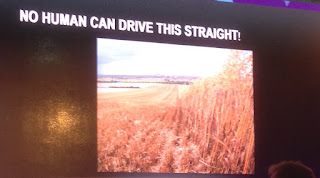 Although very impressive, in many ways this farming case study is actually quite ordinary. It’s an application of digital technology that extends existing practices for improved cost benefit.

What really caught my attention though was the series of presentations on the “sharing economy”. Naturally there were presentations from the big names like Uber and AirBnB, both expressing concerns about government action or inaction preventing growth. For AirBnB certain cities came in for criticism. Uber asserts the Irish government is effectively protecting the incumbent taxi drivers and preventing rollout. Given both firms are very persuasive on the opportunities to create bigger marketplaces and, in the case of Uber, positively impact emissions, I wondered whether both firms would be better served if they worked with unions and governments to demonstrate how the business model and technologies could be used to extend, improve and integrate the old and new.  Maybe using smaller environments such as Skibbereen or Cork to act as exemplars, rather than taking the more confrontational approach casting the incumbents as Luddites.

A really instructive session introduced a seriously mundane application from Kollect, a local rubbish collection operator that has established a digital business offering “on-demand, pay as you go” rubbish collection. The householder uses a smartphone app to communicate his or her instructions for pickup when the bin is full. Kollect then coordinate the request to third party waste disposal companies who make the pickup. You might say a variant on the Uber model for rubbish collection that claims to reduce collection costs by up to 40%. A big deal in Ireland where bin charges are often highly contentious. This demonstrates like nothing else the pervasiveness of digital opportunities.

A similarly instructive session came from a very impressive Dublin not for profit organization, Food Cloud. They started in an incredibly small, local way to try to address the huge amount of food wasted in the retail supply chain by redistributing to worthy causes. Initially they enabled small businesses to communicate leftovers and collection times at the end of the day by smartphone app and then establish demand from charities. This simple idea has been picked up by food giants like Tesco who have integrated the concept into their own instore systems to make donation part of their core process, and now has grown into a significant operation redistributing food from over 1000 stores to over 3000 charities in the UK and Ireland. Here we see digitization enabling collaborative processes operating for the public good, while reducing costs for the retailer.

Anne O’Leary, CEO Vodafone Ireland spoke about how Ludgate is a focal point for digitization in West Cork and how firms have embraced the concept. Larger Dublin based tech firms are now facilitating employees to work remotely out of the hub; smaller, local firms are setting up in the hub to have access to the hi-speed network facilities. Overall the hub is seen as a great success and delivering on the promise of supporting up to 75 people in the creative co-working environment with the long term objective to create 500 direct jobs and 1000 indirect jobs via a sustainable digital economy for Skibbereen and the wider West Cork area. She went on to say that the SIRO partnership views Skibbereen as a prototype, and is now planning a further rollout to establish 50 hub towns across Ireland.

The following day I was sitting in my kitchen with a neighbour – a lecturer in horticulture. He told me he has a project in progress to plant two thousand and twenty apple trees in and around Skibbereen by the year 2020. The idea being to introduce a greener environment with pervasive blossom in the Springtime, adding to the charm of the town. He is harnessing the enthusiasm of his students to identify the sites, make agreement with owners, to clear the ground, plant, nurture and critically to collect data.  He plans to collaborate with digital folk in and around the hub to develop an app and website that will monitor and manage the project, and to establish a research base for different varieties of tree, tracking and publishing crop data that will be of great interest to apple growers everywhere. An outstanding example of how the hub is encouraging students in non-technical disciplines to engage with digital transformation, increasing their understanding of horticulture science by using big data techniques for improved plant management, while improving the environment for everyone.

Notwithstanding the “digital” branding, the NDW16 event was actually little to do with technology; it was all about application of technology and the ability of the new technology platforms to support collaboration of multiple parties.  The digital hub clearly acts as an accelerator.  The network and technology enabled working spaces facilitate new businesses, new business models and improved remote working conditions for larger companies.  But the real digital transformation occurs as non-technical individuals and teams apply their current skills and expertise to leverage the technology and develop new improved business models.  And the opportunities for new and existing businesses, not for profits, informal groups and individuals, in fact everyone are unlimited.

Simply put, the maturity of the technology platforms is such that we should expect the digitization of pretty much everything we do or engage with, will happen very rapidly over the next few years.  Of course change isn’t always comfortable for everyone, and the AirBnB and Uber examples remind us that new business models must address sociological impacts. But as the de facto foreign direct investment model in Ireland comes under pressure from political earthquakes in the UK and USA, the idea that Ireland could rapidly grow significant indigenous capability doesn’t seem impossible.  Finally, it must be noted that this initiative has been achieved without government support, by voluntary effort, private investment.

IT veteran. Pioneer, researcher, publisher and consultant in software services and factories. Facilitator of enterprise modernization.

Customer Engagement
Should CEOs Be On Twitter?
People & Change
Adaptive Leadership – the adaptive leader
The Case For Digital Transformation
Digital Strategy Dilemma: Back to The Drawing Board
Recruit the talent you need for success