We continue our journey through my book “The Music of Business” with some insights on business strategy from spoof Rock Band “Spinal Tap” and cult punk rocker “John Otway”.

Simply reverse the lessons from these glorious failures and you have some transferable business lessons.  We offer live events on this and other topics via our Business and Music masterclasses on a worldwide basis for full immersion in the topic.

However, to learn about the practical stuff could take you a lifetime and involve learning from expensive mistakes as well as successes. So, is there a way to learn about strategic execution and project management quickly and without risk by examining the spoof rockumentary “This Is Spinal Tap”?

Of course there is! Check out the classic “Stonehenge” sequence on YouTube with a cup of coffee or a Jack Daniels whilst reading this chapter.

The Spinal Tap Stonehenge sequence is a sorry tale of poor project management… the gap between expectations and the outcome. Just before the sequence starts, a drawing of Stonehenge is drawn on a napkin by the group’s guitarist and handed to the scenery designer by the band’s manager. This is unwittingly taken as a definitive project specification for the manufacture of the piece of scenery.

Unfortunately, all the project resources are committed to the ‘model’ based on the dimensions (in inches rather than feet). This casual mistake by the guitarist Nigel Tuffnel results in the production of an exact replica of Stonehenge, but with a 12 -old reduction in the dimensions of 18 inches x 3 inches!

Of course, in “This Is Spinal Tap”, the band is then forced to execute their strategy using the microscopic Stonehenge model due to lack of budget to correct the mistake.

They attempt to accommodate the dramatic understatement in size by using dwarfs to work alongside the model and bringing the Stonehenge model down from the heavens onto the stage to give it greater ‘height’ and ‘gravitas’, but it is clear that they have failed.

When plotted against traditional project management approaches, it is obvious that the problem lies at the start of the process: 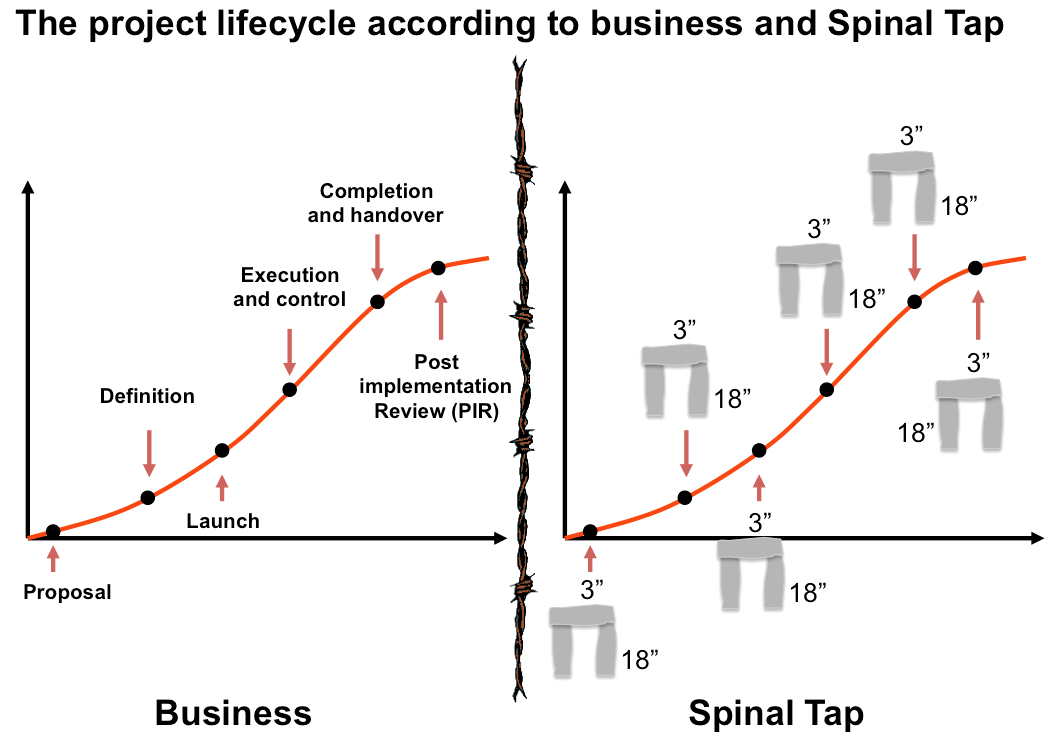 You may rightly say, “Well, this is a Hollywood comedy movie and nothing like real life”. Not at all. Indeed, the reason why “This Is Spinal Tap” is so awfully funny is that the sequences are all based on real-life events that have occurred in the rock business and the business world in general.

One such moment was the occasion when my friend Bill Nelson was trapped inside a perspex cage, which failed to open at the start of one of the dates from Be-Bop Deluxe’s “Sunburst Finish” tour.

Check out the album cover for Sunburst Finish on Google to see the picture that inspired the perspex cage sketch in Spinal Tap.

If I had a dollar for every company that has told me they have wasted millions on poorly specified projects that resulted in delivery of the wrong thing, I would have retired and you would not be reading this.

Spinal Tap business lesson # 2. Project management does not have to be complex. Just following a simple process from proposal, definition, launch, execution, completion and review is better than using the back of a cigarette packet to ensure ideas turn into action.

Spinal Tap business lesson # 3. Details matter if you want something to be right first time. They are not just for nerds.

I had my own Spinal Tap moment when I made a large investment of money and time in ‘cult punk rocker and two hit wonder’ John Otway’s World Tour. This was a wonderful idea to live the Rock’n’Roll dream on a record-breaking world tour.

The itinerary included the greatest venues on the planet: Liverpool’s Cavern, on to New York’s Carnegie Hall, Caesar’s Palace, Tahiti for rest and relaxation, Sydney Opera House and the seven star Dubai Madinat Hotel and back to The Albert Hall.

So, this was an audacious aspiration. Two weeks circumventing the world, living la vida loca, a birth, a death and a car crash, but not necessarily in that order! In case you are not familiar with John Otway, he brands himself as a ‘microstar’ and ‘two-hit wonder’ in a world more usually populated by one hit wonders. More details on the strange and wonderful John Otway at the Academy of Rock website.

The idea was effectively ‘the real Spinal Tap tour’ and there are plenty of people who would like to live the Rock’n’Roll dream for two weeks, so what went wrong? Well, the project definition stage was omitted in favour of going straight from a broad idea to launch.

This meant that nobody had a clue what was happening and how their activity related to the overall plan. Poor execution of the strategy killed the project dead. The tour eventually breathed its last breath due to cash flow  starvation to pay Air Tahiti for the Airbus 340 we had hired.

That said, it was one of the more comedic projects I’ve ever been called in to rescue. By the time John Otway called for my help, it was already too late and despite injecting a small fortune of my personal savings into the project and providing 4 months full time help, my mistake was in trying to help someone who I regarded as a friend.

Here are just a few of the bizarre escapades that occurred en route to the lift off that never lifted off:

You can read more about the Monty Python-esque comedy of errors that was John Otway’s world tour at the Academy of Rock website. What then are the transferable lessons for leaders, entrepreneurs and people trying to do new things? 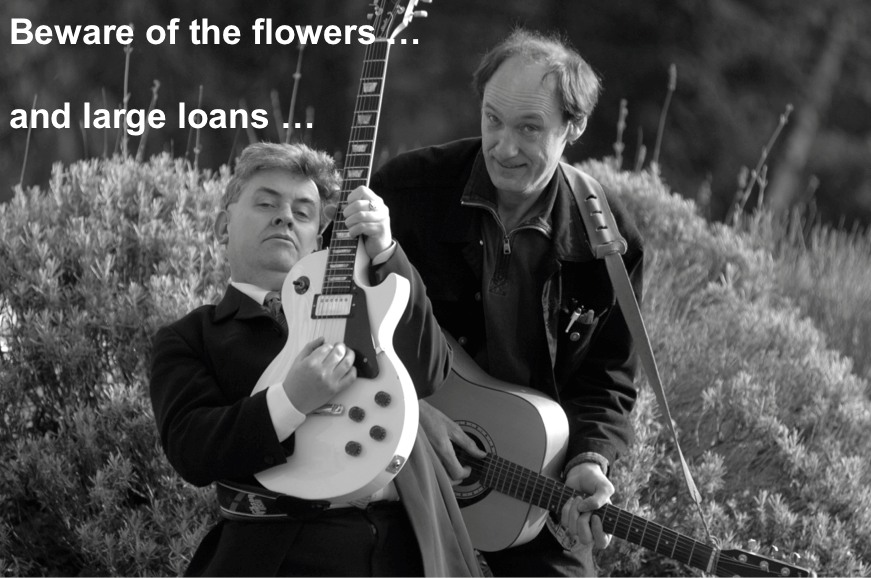 Spinal Tap business lesson # 4. Inspiration is essential for innovation, but perspiration is even more important to turn your ideas into profit! Bright ideas are plentiful but people who are prepared to sweat it out are rarer.

Spinal Tap business lesson # 5. Creative people may not like accountancy but lack of cash flow kills dreams. Quit dreaming and get on the spreadsheet.

Spinal Tap business lesson # 6. Always listen to your wife. They can see all.

Strategy & Innovation
Innovation Isn’t About What You Control, But What You Can Access. The Procurement View.
Enabling Technologies
AI For Ordinary Folks
Data & Analytics
Preaching About Primary Research
Learn from peers, thought leaders and expert practitioners for the best chance of success.