A system of systems sounds like it is a hierarchy of systems embedded in systems. Closer inspection indicates that it is more complex than that!
Sole trader or freelancer

An interesting starting point is provided by considering a sole trader or freelancer – a one person enterprise. That should be simple! What systems are encompassed within their enterprise-as-a-system? Likely candidates include:

How do each of these relate to the others? How should they relate to each other? How might they be organised to readily support enterprise development and growth?

Even for a sole trader, key principles and models are helpful in establishing an effective operating model which supports future enterprise flexibility, agility and growth.

For several different professional services enterprises, I have used the APQC Process Classification Framework as a reference model for likely systems in their enterprise. An example of what this might look like is shown in the following figure. 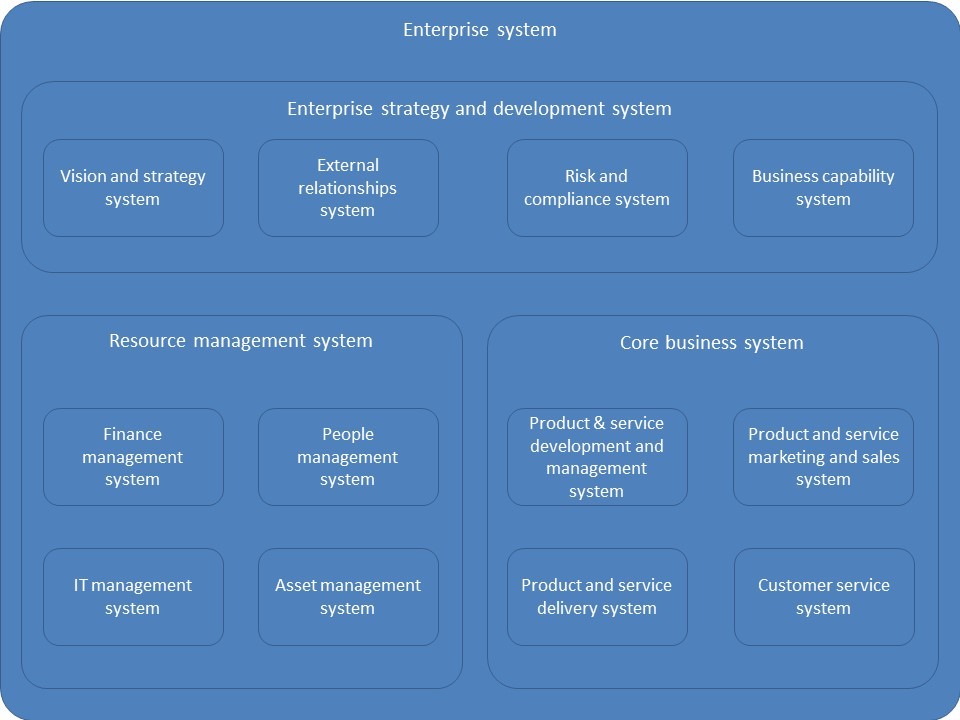 Whilst this is portrayed as a systems hierarchy with systems composed of subsystems, it is evident on closer consideration that the system relationships are more complex than this.

With various of these system interdependencies in play, it is critical in planning and executing any improvement initiative for one or more enterprise subsystems, that clarity is established as to:

Many organisations have subsystems which are dependent on supporting technology systems, where technology encompasses any entity other than people which represents and enables the application of embedded processes. Examples of subsystems using technology include:

This extends the system-of-systems line of thinking into addressing more complex networks of people-based-systems (soft systems) and technology-based-systems (hard systems). This enables consideration of:

It is in situations of complexity that architectural methods are applied to enable multiple stakeholders and multiple solution design and delivery roles to develop shared views and deliver solution components that can be integrated into the full system-of-systems. This is where various forms of abstraction are applied to consider the parts of the enterprise requiring change and improvement, including:

These issues are explored in other articles, including: