Robotic Process Automation (RPA) is a form of automation where intelligent software processes, referred to as “Robots” take over repetitive and rule-based tasks that would have otherwise been performed by human beings.

My first experience of RPA was a simple one……taking a customer telephone number from Cisco CTI passing it on to SAP CRM and pre-filling the interaction screen allowing our call centre team to remove repetitive tasks and improve the customer experience by routing the call to the correct agent.

RPA is considered a disruptive technology solution offering multiple benefits impacting in areas such as:

And has been used across industries such as Banking, Healthcare, Logistics, Telcos & Utility companies to name but a few.

Looking at the global market for RPA the Gartner report for 2018 shows RPA software revenue grew 63.1% to $846 million and expects revenue forecast for 2019 to reach $1.3 billion driven by digital business demands with the top 5 vendors controlling 47% of the market with some amazing growth numbers between 2017 and 2018. 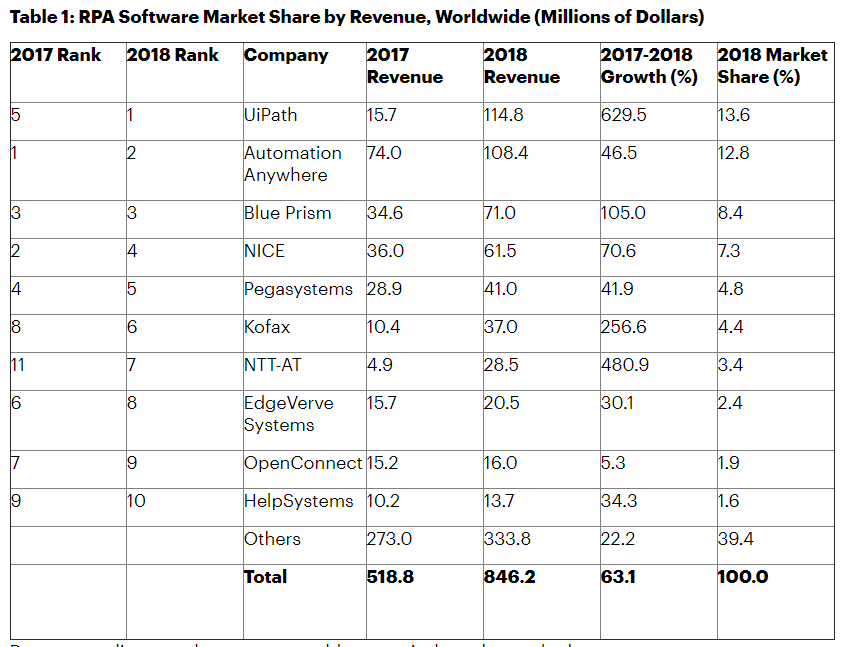 The risks appear highest in sectors such as transportation and storage (56%), manufacturing (46%) and wholesale and retail (44%), but lower in sectors like health and social work (17%).

RPA tools are best suited for processes which are repeatable and predictable interactions with IT Applications – the deployment of these ‘robots’ can improve efficiency and handling of high volume transactions without the need to transform the underlying systems. Programmed correctly RPA can be used to open email attachments, complete forms, record data and essentially mimic what a human would do sitting at a computer terminal.

RPA can be effectively used to automate processes which are:

RPA typically sits on the User Interface and is useful when interacting with legacy applications allowing for creation of digital process flows – the downside, however, is that if the front end UI is changed in anyway the RPA would need to be reprogrammed as undoubtedly this change would lead to a broken process flow.

In its basic form RPA is a completing a repetitive task and so long as there is no change or interruption in this task then it works correctly.

As AI has improved we now have greater capabilities which has led to the development of Cognitive Robotic Process Automation (CRPA) – this new and emerging technology, albeit in its infancy, has the promise of integrating multiple cognitive capabilities including Machine Learning, Natural Language Processing & Speech Recognition.

It will be interesting to see how CRPA will evolve in the coming times but for now RPA is a great fit for your business if you are looking for a tactical and simple way to acquire process efficiencies and may help organisations that are transaction heavy and time-poor.

And so to my question “Are the robots here to stay?” – based on the need for companies to evolve, the growing demand for consumers for faster, better, and more engaged suppliers and the size of the growing market I would say “YES”.

The Case For Digital Transformation
News in Digital from The Digital Transformation People #20
People & Change
How do you manage distributed workers?
Enabling Technologies
What’s the difference between Consumer IoT and Industrial IoT?
Learn from peers, thought leaders and expert practitioners for the best chance of success.