Recently we’ve had the very great pleasure of designing a Sprint in a Day workshop with the team at the British Heart Foundation. There’s no shortage of jibber-jabber about “agile” in media and business circles, so we focused on designing something very practical in an attempt to bust some myths.

The BHF’s Digital Team are expanding rapidly and embracing (Large Scale) Scrum-based Agile. This way of working has generated a lot of interest around the organisation, especially in teams with no responsibility to create software or digital products. What better way to teach people about the principles and practices than to get them using them.

Sprint in a Day

We named the final format “Sprint in a Day”. The plan was to take the participants through all of the key activities of an Agile sprint in a single day (Google Ventures need 5 days apparently – they really need to step it up!) We were able to create a set of truly cross-functional teams, with participants drawn from across various BHF Directorates: Fundraising, Healthcare Innovation, IT, Volunteering and more. This in itself led to an inspiring discussion about the benefits and implications of this way of organising.

Over the course of the “Sprint in a Day”, teams went on to:

That was a lot to take in in a single day so it was quite intense.

The participants were provided with an Agile Toolkit and series of templates to help them find out more and introduce some of the practices to their teams. There was a real sense of awe about what could be achieved in just one day using this methodology. And in terms of a learning exercise, we strongly believe that this active approach beats death-by-PowerPoint every time. The feedback has been great so far. Don’t take our word for it though:

“Subsector are a dream to work with and such personable but knowledgeable presenters. Never fail to impress!!!”  Kate Callaghan, Digital Planning & Product Manager, BHF

Just a final note to praise the courage of the participants. “Get out of the building” is really easy to say, but it’s much harder when it’s you trying to stop a pedestrian on Camden High Street so you can wave your crazy prototype in their face. 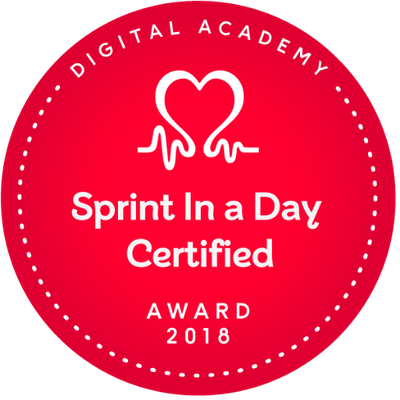 You can find out more about our workshops here.