This entire week, over all my social media platforms, I am publishing multiple other NRF 2019 summary reviews. Primarily from an Expo floor perspective where billions of innovation dollars are being invested, here are my impactful retail transformational takeaways.

IoT is not Just a Buzzword

NRF 2019 confirmed that the Internet-of-Things (IoT) is moving from a buzzword to solving industry problems. Solutions were visible all over the Expo floor. 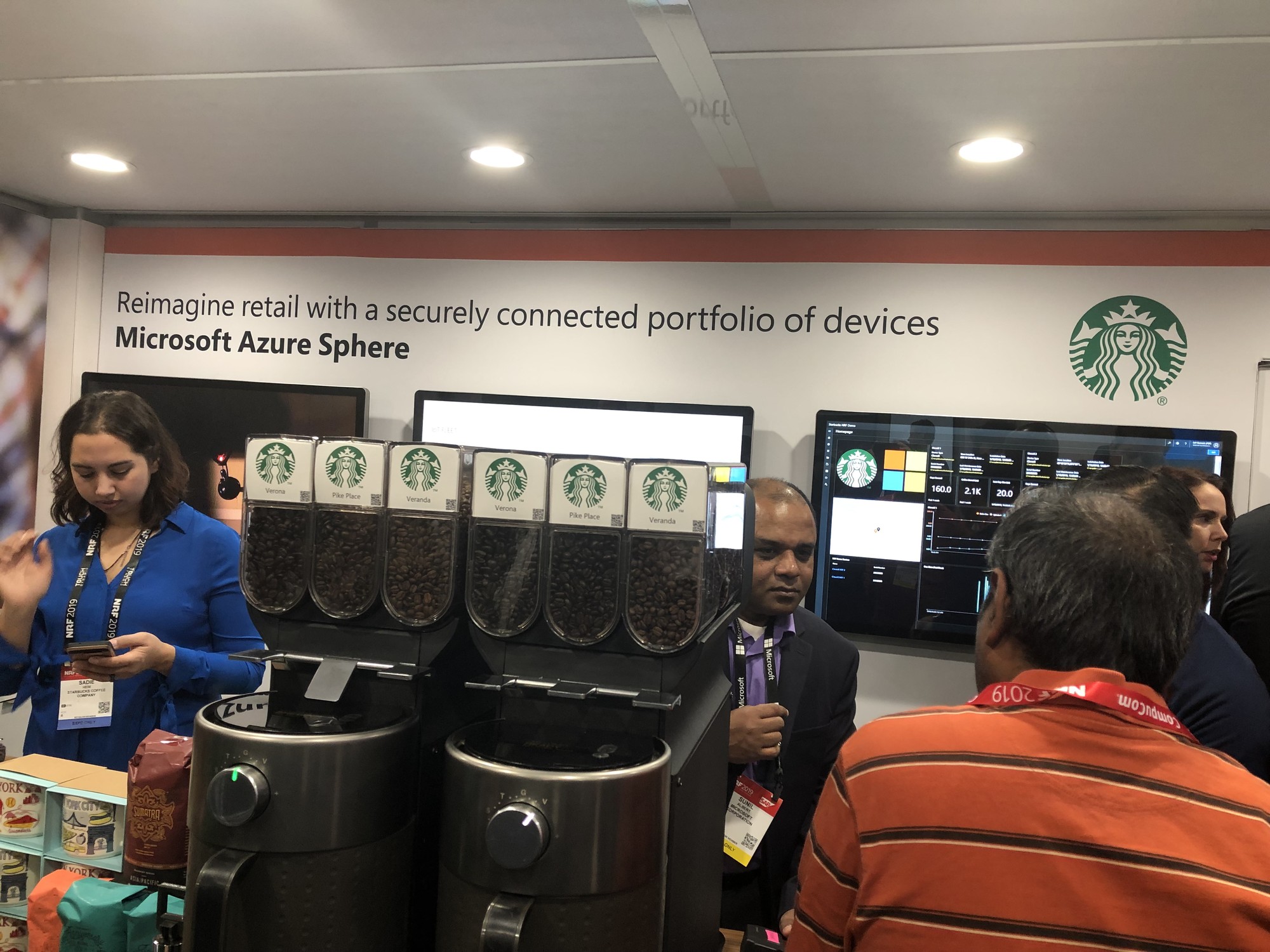 On a more practical level, the Microsoft-Starbucks IoT partnership reduces risk and eliminates errors in the distribution of new recipes. Current process: “Twice a year, Starbucks put the formulations on some 8,000 USB drives and then had regional maintenance technicians visit its stores across the country to plug the drives into the machines.”

The Digital East Meets the West

Have been asserting for some time that China is the digital laboratory for the future retail industry. At NRF 2019, Alibaba made its first grand appearance showcasing physical to digital consumer engagement experiences from their Freshhippo (previously branded Hema) Chinese stores. If you want to see what was in the booth, check out their short New York “Big Show” introduction video.

Here is a better much better explanation of what Alibaba characterizes as “New Retail”.

An additional China example was the JD.com smart vending machine. Opened with the WeChat smartphone app, cameras inside accurately count and charge for products removed. 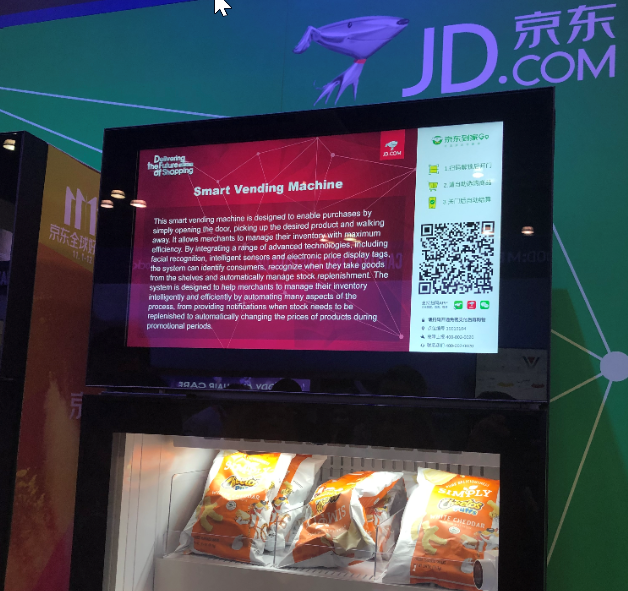 Always Start with the Customer

A favorite trend that increased its presence at NRF 2019 is retailer immersion into vendor exhibits. Innovation partnerships are a key ingredient to greater experimentation and faster deployment of new consumer engaging solutions. Salesforce.com was the best example of this trend on the Expo floor.

Note the virtual reality (VR) demonstration in the Rituals pop-up store. Complementing the customer innovation delivery formula, actual Rituals products were provided for the guests participating in the demonstration. Great to see the addition of actual retailers in multiple exhibitor booths speaking to the specific value of the delivered solutions.

Artificial intelligence (AI) solutions were prevalent throughout the show floor. An example was the large screens on the outside of the Intel booth which optimizes advertising based on demographics observed through computer vision. 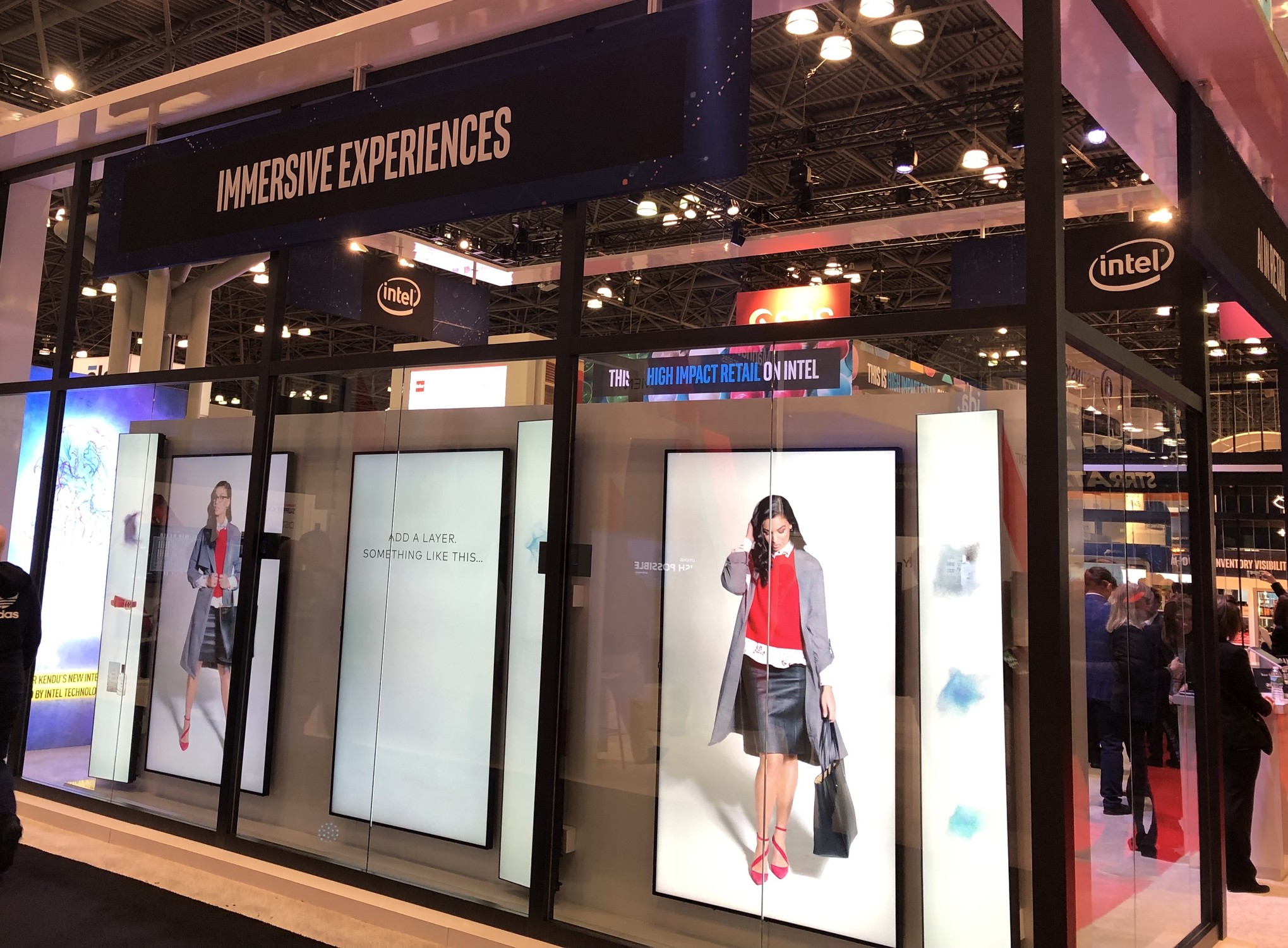 In addition to China’s JD.com smart vending machine above, other favourite digital technology examples in the Intel booth included a variation of the Amazon Go technology and the AI drone inventory visibility.

Your Face as the Retail Passport

As discussed in my December article series, facial recognition is increasing its presence in our daily lives. Multiple booths demonstrated the technology. In the NEC booth, a 7-ElevenThailand (11,000 stores rollout) video was featured. 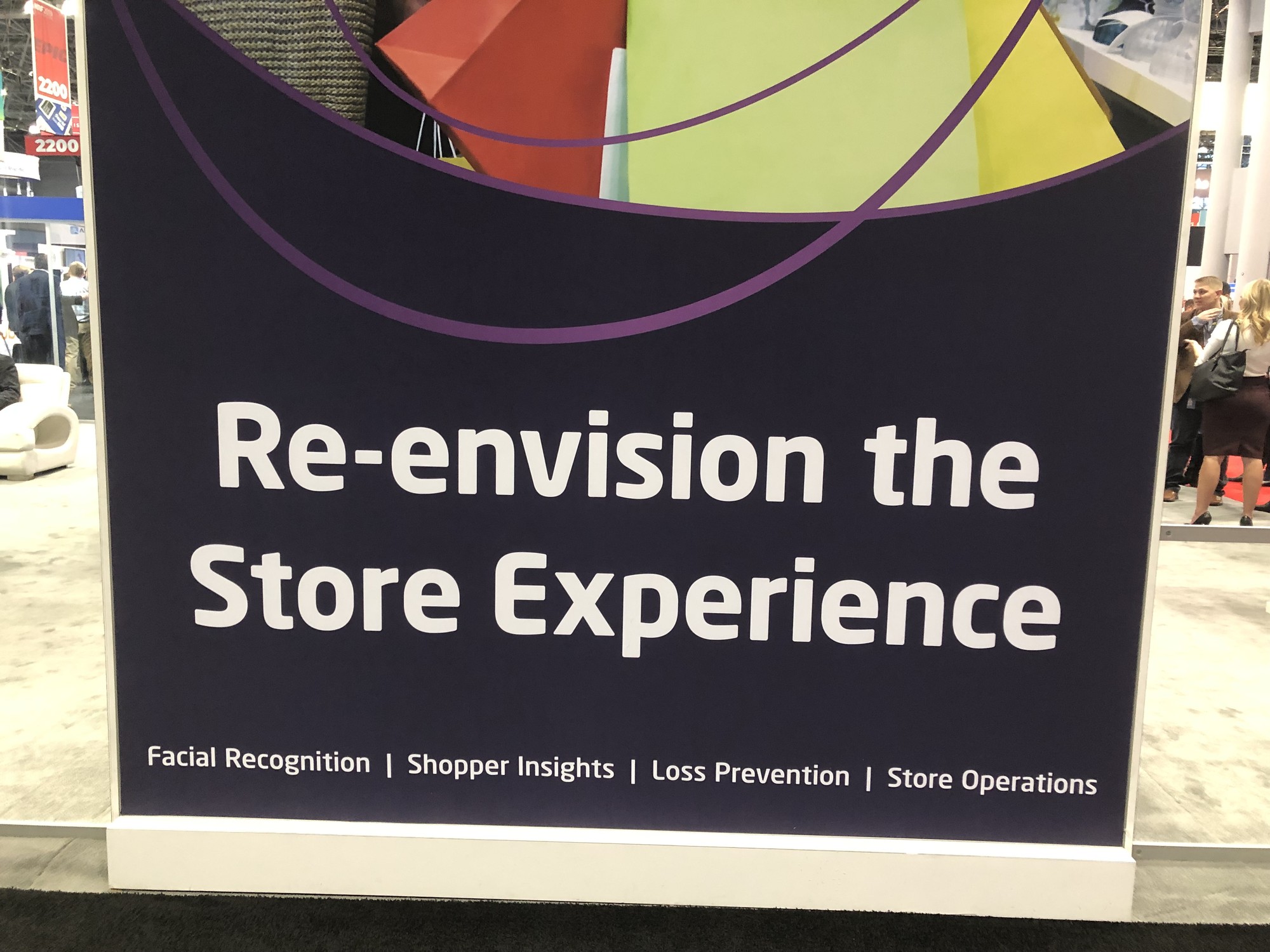 Smarter Shelves are Coming to a Store Near You

Pleased to see an increased focus on smart shelf solutions. The closer you engage consumers at the point of purchase, the greater the impact.

Another example using a Whole Foods end-cap was in the Intel booth. In this demonstration, relevant product suggestions are provided based on age, gender, reaction and interactions with products in real time. 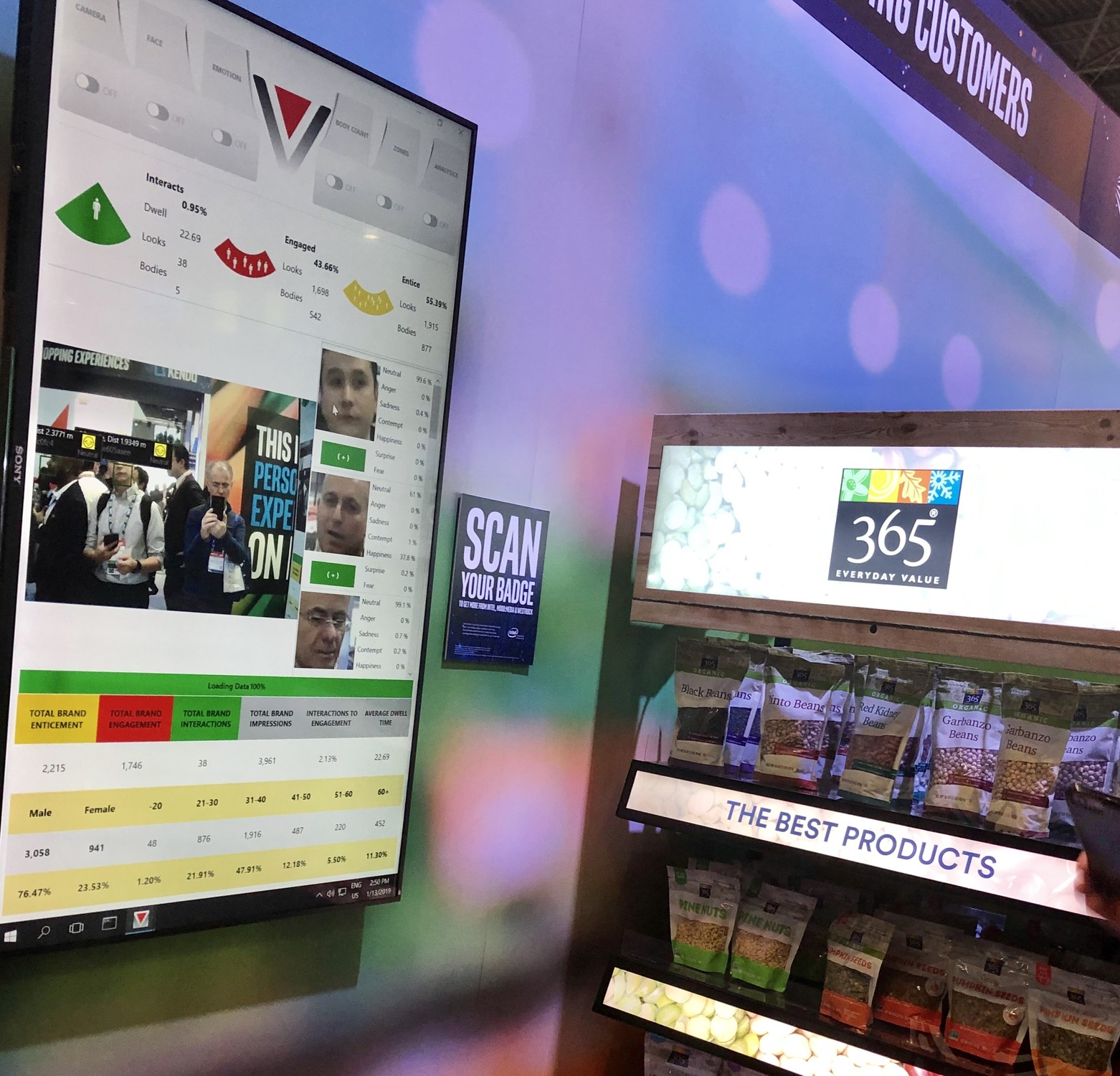 A very interesting solution both at Retail ROI SuperSaturday and on the NRF 2019 show floor was the BLOCKv blockchain butterfly demonstration.

Virtual butterflies were released at NRF 2019 and using the app attendees were able to grab objects in augmented reality or a map. These butterflies could then be swapped for prizes. Imagine the possibilities of a future with highly personalized gamified secure immersive consumer experiences.

Lucky Seven is Just the Beginning

Amazon was back with AWS services and Google had a surprising larger presence. 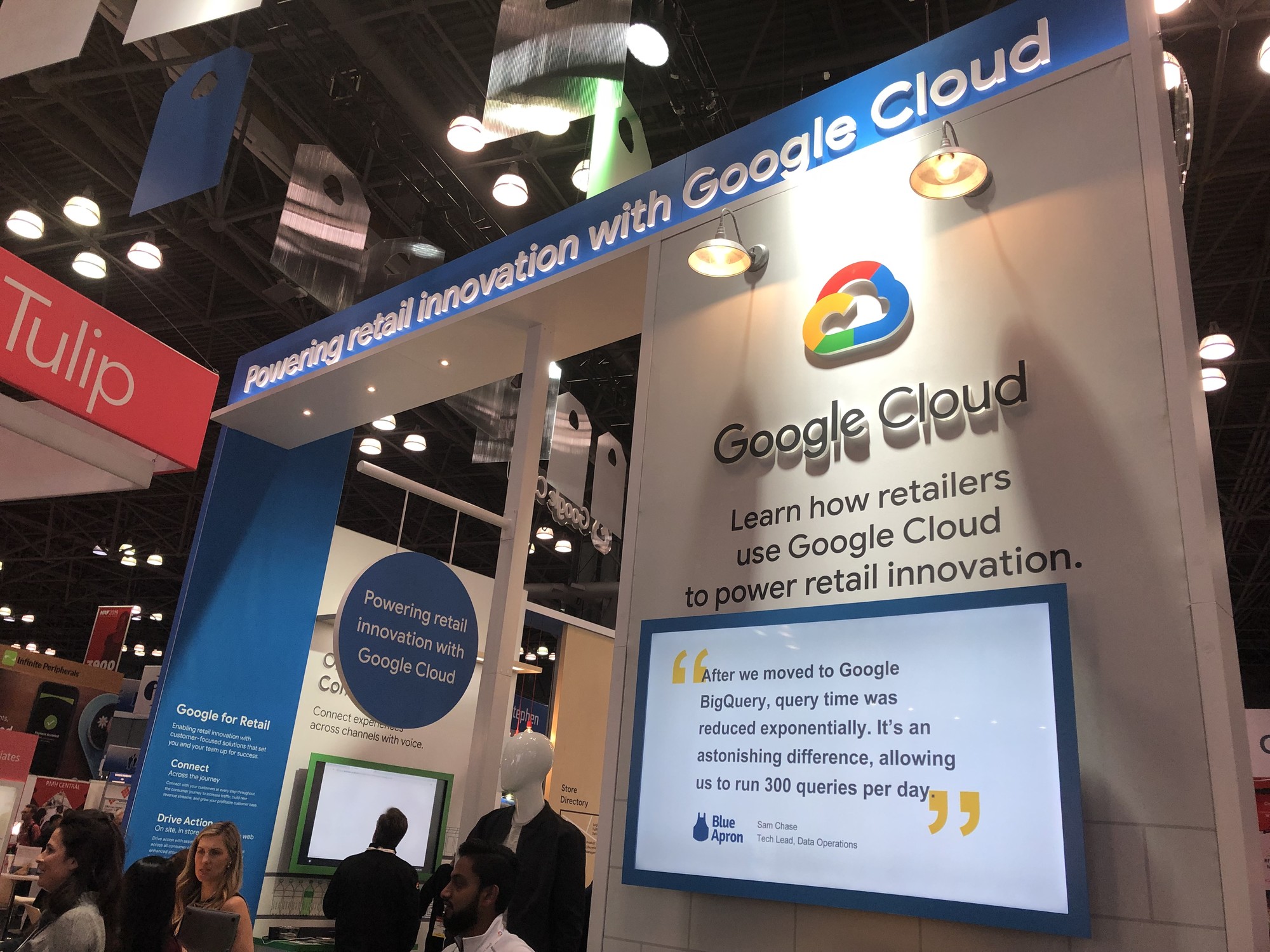 Note that this year’s seven takeaways did not include robots, Cloud solutions and RFID. All three were present at NRF 2019 in multiple exhibits and their utilization is increasing in retail. Other interesting concepts at NRF which I will reserve for future posts include Retail as a Service (RaaS), AI enabled visual big-data war rooms, next-generation loss prevention solutions, and every surface as an immersive consumer engagement platform.

Judging by the increased number of start-up companies in the NRF 2019 Innovation Lab, the impactful retail transformation is just getting started. See you next year.