This post is an expanded version of my biweekly newsletter content, which features a letter from me to you along with ideas worth sharing and a healthy dose of fun. Not on the list? You can subscribe right here.

Nothing ignites fire in the gut of righteous grammar geeks more than the serial-aka Oxford-comma.

Maybe you heard about the Maine dairy-truck drivers’ recent legal victory that hinged on a comma-actually, the lack of a comma. The truck drivers won an appeal against their employer, Oakhurst Dairy, regarding overtime pay. Last week Oakhurst settled the case and paid up.

What’s a serial/Oxford comma? It’s the final comma in a list of things in a sentence. As in:

The Oxford comma is that comma after “ROI.”

Here’s a well-known explanation of how the Oxford comma adds critical clarity: 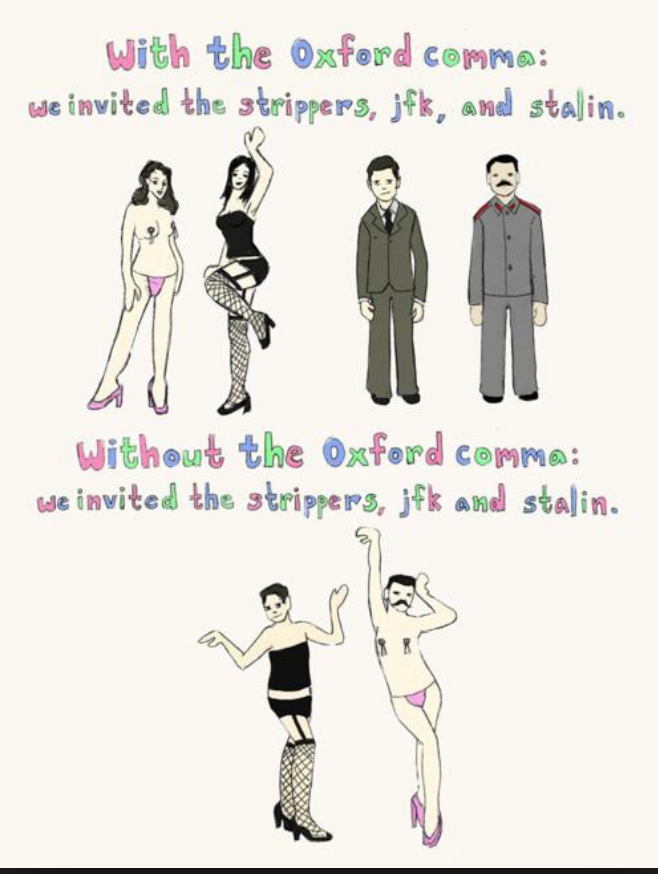 One Morning in Maine

The Maine dairy story is a convoluted story, as most law-related stories are. Here are the basics:

The case of the dairy-truck drivers’ comma has got several things going for it, says former New Yorker copyeditor Mary Norris.

It’s got a David-and-Goliath showdown between the little guys and the corporate overlord.

It’s got “guys driving around in trucks with copies of Strunk & White in the glove box.”

But it’s also got something else we love: It’s got people arguing over grammar.

And we especially love to argue over the polarizing Oxford comma: defended as a beacon of clarity, derided as an unnecessary pest.

Why does something as pedantic and ordinary as grammar ignite raging debate-both in Maine and in the rest of world? Even when there isn’t actual money at stake?

And more broadly: Why do some of us love to correct the grammar of others? Love to sharpen our grammar chops on the soft underbelly of those unfortunates who might use literally to mean figuratively? Who misspell lose as loose?

Maybe it has something to do with that word “rules” when it’s paired with “grammar”: Grammar rules seem strict, impenetrable, unyielding.

Some grammar rules are more like laws or statutes-breaking them quickly creates anarchy: “The U.S. Grammar Guild Monday announced that no more will traditional grammar rules English follow. Instead there will a new form of organizing sentences be.” ( The Onion)

But others are more open to interpretation: Splitting infinitives ( to boldly go is a famous one).

Ending a sentence with a preposition.

Using “they” as a singular pronoun.

Grammarians are thought of as judgy, humorless souls.

The type to correct you silently at a lunch counter when you’re ordering a sandwich. Many find work as editors or copyeditors.

But most grammar sticklers I know come at it less based in judgment than in something more generous: They want to help us all be understood.

The editor is often silent and invisible, grafting weak sentences and buttressing feeble structure into something more hearty and lasting. They don’t get the credit for the bounty or the beauty, either: That glory lands squarely on the needy writer.

So if we think of grammar less as rules and more as a handy set of guidelines for clear communication, then grammar works for us-not against us. Like the best editors.

Grammar guidelines are often not hard-and-fast-because language is a living, changing thing.

Language is constantly on the go, always up for a joy ride to god knows where….

“Grammar rules” stirs up in the righteous a feeling of right and wrong, of needing to put a stake in the ground, to polarize language: Black and white. Off and on. Yes and no. Smart and stupid.

Again, occasionally it really matters ( overtime or no overtime). But often it just doesn’t.

Writing-like life-is often experienced more richly in its nuances. Nuance is the Petri dish for language-because language evolves when all of us collectively search for a word that captures a meaning better than some other word ( froyo, humblebrag. truther.)

So let’s get back to the original question:

Why do we enjoy a solid grammar throwdown, anyway?

Because grammar rules are often not really rules.

We might not be able to affect Net Neutrality (a phrase added to the dictionary in 2017, bee tee dubs).

We feel powerless about Russian meddling.

The world can be a dark and horrifying place.

WE SURE AS HELL AREN’T GOING TO LET THAT LACK OF A COMMA SLIP BY.