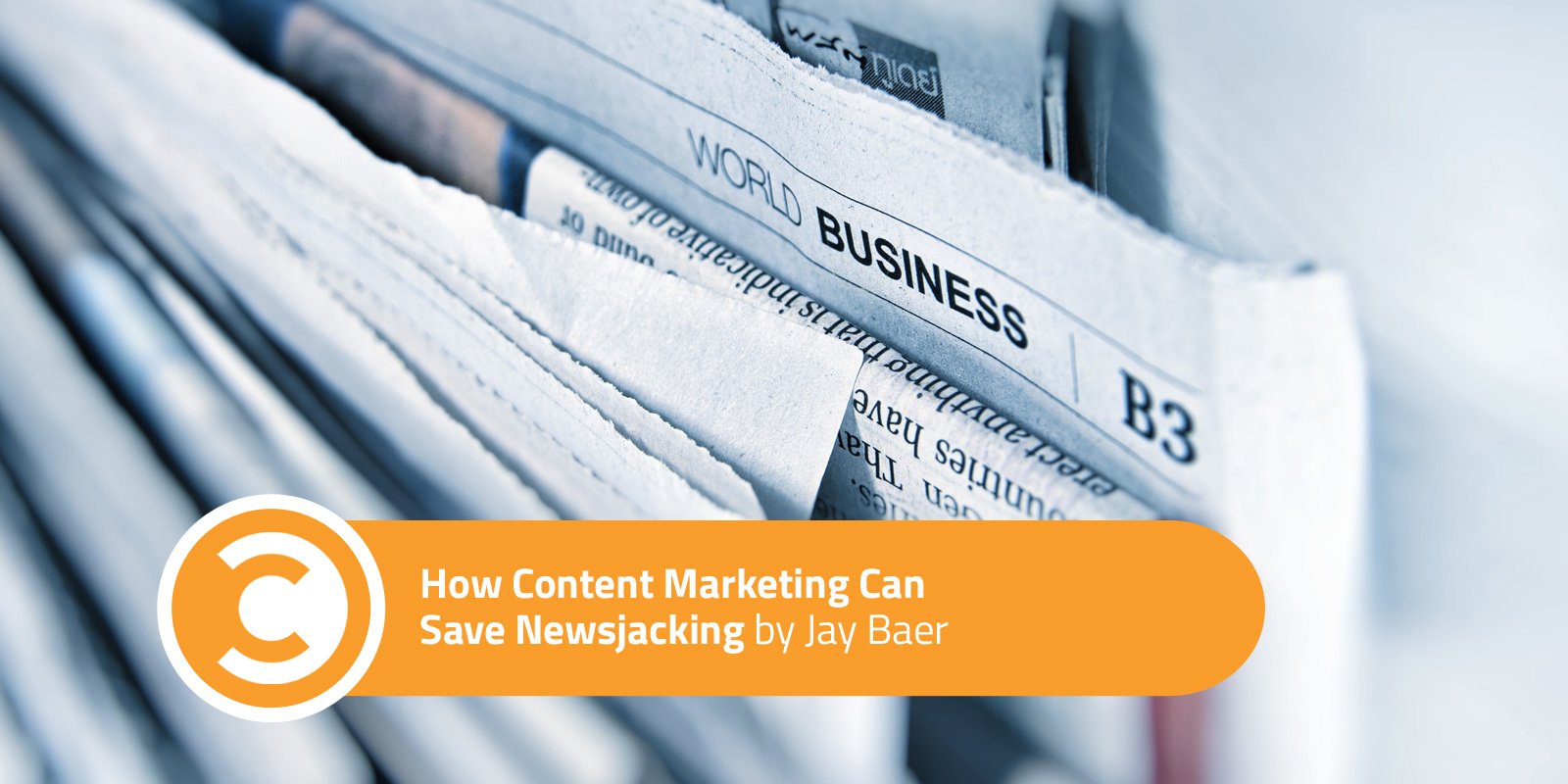 This is more true than ever today, as the atomic half life of brand communication continues to shrink, victimized by algorithmic masters that dole out attention like Pez.

The massive flood of content created every second of every day about every topic and happening results in overwhelming competition for attention, as has been well-documented by Mark Schaefer, and others.

The antidote-at least in some circles-is newsjacking. Coined by David Meerman Scott in his book of the same name, where he defines the concept thusly:

” Newsjacking is the art and science of injecting your ideas into a breaking news story so you and your ideas get noticed.”

The important part of this definition is “breaking news story.” The intent of newsjacking as originally conceived is that your brand’s angle is the second paragraph in traditional media coverage of whatever is happening. The actual story is paragraph one.

Newsjacking was published in late 2011, and became deservedly popular, especially among public relations practitioners who saw it as a reliable recipe for merging long-lead story pitching with real-time earned media.

Just fifteen months later, however, the now-legendary Oreo Dunk in the Dark tweet was sent. With one tweet, Oreo and their agencies ushered in the era of “real-time marketing,” and “RTM” disciples rushed to set up Twitter war rooms to capitalized on every trending hashtag.

This post from the Get Spokal blog illustrates the outcome. Nearly every one of their 15 newsjacking examples is a tweet, and essentially none show evidence of earned media coverage whatsoever (other than perhaps trade press talking about the clever tweet, thereby earning ego points among marketing peers, but not creating any real business value).

I am not a fan, and have never been a fan, of this kind of marketing. (In fact, my post “17 Mostly Failed Brand Tweets from The Oscars” is still one of the most-read posts in the history of this site.) For more, here’s a short video rant on why most brands are trying to hard to be clever, in real-time.

My three biggest problems with real-time marketing are:

But all is not lost for the newsjacking premise. Today, it is easier than ever to create on-trend content in nearly real-time. With everyone carrying around a mobile production studio in their pants at all times, there’s not much excuse for not being able to produce content on the fly, beyond inertia and corporate process obstacles.

Further, with the one-click availability of live video, creating reaction content that inserts your angle into a breaking news story is as easy as making a sandwich (maybe easier if you insist on using a panini press).

This approach-using content marketing for newsjacking rather than social media-has multiple advantages:

You do not need to be a big brand with an in-house video studio to engage in this form of content marketing as newsjacking. In fact, from a nimbleness perspective, I might argue that you’re better off being a small and scrappy business that can turn on a camera and record without sign-offs and hand wringing.

This year, the Kelowna area-the major city in Canada’s Okanagan region-has received a tremendous blanket of snow, far more than is typical for this area. Local media scrambled to cover the storms, with advice and counsel for local residents and visitors.

The last time this happened was in 2015, which was when Dr. Wood created his content marketing newsjacking: a video showing local residents how to shovel snow without injuring their backs:

It’s a useful, safe, three-shovel approach that I’m going to try next time we get a lot of snow here in Indiana!

KelownaNow.com is a large digital media platform for the region, and when this year’s snows rolled in, they discovered Dr. Wood’s video and promoted it on their site, and in their social media.

Lessons from This Newsjack

Big hat tip to my friend Jan Enns for bringing this case study to my attention, via a Linkedin post.

Newsjacking was originally about earned media through real-time public relations. It was co-opted by social media to become more about ” riding the hashtag ” but that has limited upside and potentially large downside, in my estimation.

Instead, since we now have the ability to make credible content marketing (especially video) instantly, use that opportunity to pursue a newsjacking strategy that is rooted in content marketing, with social media as the amplification layer.