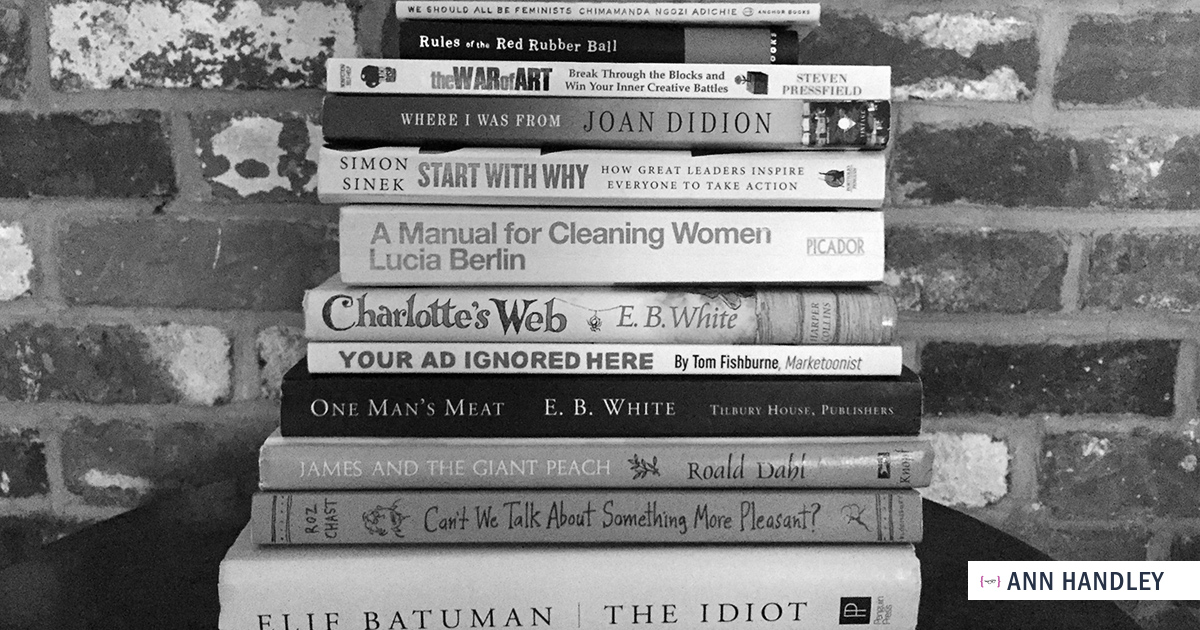 My favorite book is always the one I’m reading now. I get vested in the story, in the characters, in the voice of the writer.

The last few pages can feel like a kind of death (a sense of foreboding, a final ending), which is why I often sequentially, and (sometimes) obsessively, read the works of a writer I like.

Ten years ago I read Me Talk Pretty One Day, and that year I read so much David Sedaris that I’d observe something-say, a man in a Santa suit waiting in line for a sandwich-and I’d think, “David would love this.”

So when I tried to choose my top recommendations among the books I read in 2017 that will make you a better writer in 2018… well, it was agony.

I had to exclude more than I could include. But, eventually, I compiled a list of my top recommendations. They aren’t necessarily my all-time favorite books (although some are), but they will make you a better writer. I explain why.

Most of these are not new books. Many were published years ago; and, in at least a few cases, decades ago. And some I didn’t read for the first time in 2017, but re-read them.

The best books lend themselves to rediscovery: Over and over again you can re-read what’s old… and stumble into worlds that feel brand new.

New Yorker cartoonist Roz Chast documents the decline of her aging parents in this memoir that reads like a graphic novel. Roz isn’t the first writer to give cartoon treatment to a serious subject, but she’s one of the best. (By the way, if you’re a fan of literary graphic novels generally, Book Riot can hook you up.)

Roz’s book is painful, honest, and (often darkly) hilarious. It’s a great read even if you aren’t dealing with aging parents or grandparents (and I’m not; my parents died decades ago). Then again, I’ve been obsessed with death (my own and others) since I was a child. ☺

Honorable mention: Caring for Red tackles a similar subject. It’s written by my friend Mindy Fried, a sociologist who writes about caring for her 97-year-old father in the final year of his life, with a political backdrop (her father was an actor, writer, and a labor organizer who was called before the House Un-American Activities Committee).

What writers can learn: How to write about ordinary stuff in an unordinary way (B2B content writers, I’m looking at you). Each of these books documents ordinary moments in ordinary lives-but with a perspective and treatment that make the stories anything but prosaic.

My friend Mitch Joel recommended Steven Pressfield’s book to me years ago, and I finally got around to reading it in 2017. I don’t know why it took me so long.

Then again, Steven’s book is about procrastination. I procrastinated reading it. That seems apt.

What writers can learn: How to get things done. Steven writes, “It’s not the writing part that’s hard. What’s hard is sitting down to write.” Yep.

A series of short stories by Lucia Berlin, published posthumously. I bought it on a whim in the Oslo airport only because I had 200 kroner I needed to spend. (I bought a packet of nuts, too.) It turned out to be one of the more important books I read in 2017.

It wasn’t always a pleasant read. Some of the 40-odd stories are disturbing and brutal. But Lucia’s use of language, the pacing of her prose, the unorthodoxy of the grammar, and the intensity of the characters stuck with me long after I finished it. Sometimes, I’ll be driving down the road, mechanically, and suddenly I realize I’m thinking of a Lucia Berlin story.

(Side note: Another reason I love this book is that my niece Grace, too young to read, asked me the title of the book; she then asked, “Why were the women dirty?”)

What writers can learn: How to play with language. This book makes prose crackle like poetry. Yet it always feels as accessible and grounded as a newspaper article.

This 2011 book by Simon Sinek is on my 2018 list because that’s the kind of cutting-edge, front-runner I am in my book-reading habits.

But in 2017 my colleague Val Witt and I formed a Book Club of Two and read this book together. And I grokked the why of Start with Why: It’s basic. It’s powerful. I wolfed it down.

What writers can learn: How to find a bigger story. People on Amazon will tell you to save your money and just watch the TED talk that preceded the book. But I believe books should be priced to reflect the amount of thinking and toil that goes into them. A book should cost a thousand dollars or more, not $8.99.

Watch the TED talk if you want, but buy the book, too. Don’t be a jerk.

If Marketing kept a diary, this would be it. I wrote that sentence in the foreword to Tom Fishburne’s first book, so you already know I’m biased. Through cartoons and commentary, Tom documents the evolution of Marketing over the past 15 years.

What writers can learn: How Marketing has changed. And similar to Roz Chast’s book (see above), Tom’s book gives “history” a wonderfully unorthodox and accessible treatment.

I struggled with whether to include Elif Batuman’s 2017 novel here, probably because I struggled with the book itself. The plot can be tedious and the characters sometimes maddening, so why the devil is it on this list…? Keep scrolling…

What writers can learn: How to write a sentence. The craft is really nice. And reading good writing from the hand of a master writer is a relief, like you can relax and just enjoy the ride. Plus, I suspect that Elif’s next book will be way better than this one, so you should discover her early.

To say that I have a literary crush on E.B. White is an understatement on par with saying that “oxygen is important” or “2017 politics were ludicrous.” Some things are so obvious they don’t need to be said. Which is why E.B. White is on this list not once… but twice.

This title is a collection of first-person essays published 55 years ago, largely centered on the writer’s daily life on a Maine saltwater farm five hours north of Boston.

I visited that farm in the summer of 2017. I parked my rear end in the very same spot E.B. White’s rear end occupies in the picture on the cover of this book. There is no better personal essayist than this guy.

What writers can learn: How to blog. This book is a must-read as a prime example of sharp, first-person writing that never veers into indulgence or myopia like a lot of blogging does. If you do nothing else, skip to “Once More to the Lake” (page 198). Read. Weep. Learn.

Yes, it’s a children’s book. But to term it that does it a disservice because this is the most perfect book I’ve ever read. And every time I read it, I’m convinced of it all the more.

I love a lot of classic children’s lit and young-adult books because you can feel the writer holding his or herself to a higher standard: kids will not tolerate boring. And the books don’t waste time trying to show how smart they are: They just tell a really good story. In children’s lit, less is so often more, and there’s no better book to prove that maxim than this one.

What writers can learn: How to structure a story.

I got back into Joan Didion’s essays this year after watching a Netflix documentary about her life, directed by her nephew.

The best moment in that documentary comes when her nephew, Griffin Dunne, asks Joan about an essay she’d written on the Haight-Ashbury district of San Francisco: The essay ends with a scene of the writer’s encounter with a five-year-old child whose mother has given her LSD. Dunne asks Joan what it was like-as a journalist, as a mother-to see a small girl tripping. Joan says, “Well, it was…”

Then, finally, she answers: “Let me tell you… it was gold,” she says. “You live for moments like that, if you’re doing a piece. Good or bad.”

I wanted to judge her. Then I remembered a moment in The Year of Magical Thinking, her 2005 account of the year following the death of her husband, John Gregory Dunne, when the EMTs who arrived at her New York City apartment call her a “cool customer.”

Part of being an artist is being the world’s best observer, even of your own grief. She’s not heartless. She’s a writer.

So then I was off… binging on Didion again.

What writers can learn: How to develop a voice. Joan almost single-handedly invented the “literary journalism” category in the 1960s and ’70s. But it’s her sentences I enjoy. Each one is a genome: I could find an single, errant Didion sentence wandering around on its own-divorced from the others in the paragraph or on the page, stripped of her byline-and still I’d know who to send it home to.

I’m not sure whether I’d call this a book shaped like an essay or an essay shaped like a book. This book is about the size of a greeting card, and at 52 pages it’s the literary equivalent of a toddler clomping around in her mother’s heels. But it’s also personal, eloquent. And it’s a less demanding read than the other Chimamanda Ngozi Adichie book I read this year, Americanah.

This was also a TED talk first, and it’s essentially a transcript of her talk.

What writers can learn: How to persuade through personal essay. Also, note to would-be authors, here’s a prescription: 1) Find a TED stage. 2) Deliver a killer talk. 3) Pray it goes viral. 4) Sign book deal.

Before there was Neil Gaiman, and R.L. Stine and Lemony Snicket writing creepy children’s books, there was Roald Dahl.

I read this 1961 book for the first time this year because my son Evan found a first edition in a used bookstore and bought it for me for Mother’s Day. It reminded me how wonderful a writer the Brit-Norwegian Roald is.

His work (like Gaiman’s and that of the rest) makes me slightly anxious when I’m reading it, even though I know it’s pure fantasy, and therefore the more terrifying characters won’t come snatch me in the middle of a dark, starless night.

What writes can learn: How to feed the imagination. Or, to quote from another Roald Dahl title, Charlie and the Chocolate Factory: “A little nonsense now and then is relished by the wisest men.” And women.

You know how sometimes you meet someone for the first time and you immediately feel like you’ve known them forever? That’s how I felt meeting Kevin Carroll in Nashville last spring.

We talked for an hour or so backstage at the Country Music Hall of Fame, where we were both speaking at the same event. His story is incredible. He gave me this book, which details part of that story. I read it on the flight back to Boston and immediately purchased five more and gave them to people I love.

What writers can learn: I’m tempted to say “How to live your best life.” But that doesn’t quite capture it. Kevin’s book is smart, challenging, interesting, affirming. Just go get it.

If you haven’t yet read my own how-to book on marketing writing… well, 2018 should be your year to do it!

So there you have it.

Tell me about your reading list. What would you add, and why?