Can I order out for Pizza in JAIL? 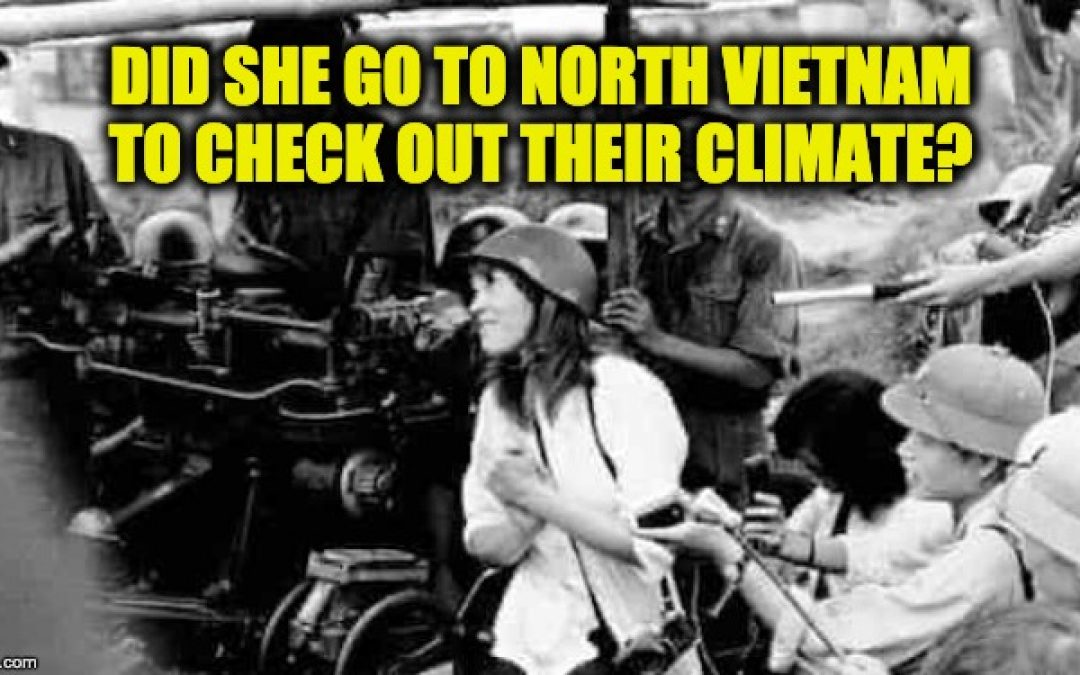 The climate change activist WHO enjoys sitting on north Vietnamese anti-aircraft guns appeared before the National Press Club in Washington for an hour-long speech and Q & A session in which she advocated for drastic measures to be taken to stave off global warming.

take our poll – story continues below

As she took the podium, the Oscar-winning actress said that worries over climate change had consumed her life video below:

“You know, I lie in bed at night searching for the right words that will galvanize people to action around the climate emergency and show them why it’s too late for moderation,” adding that she fears about what “the fossil fuel industry has done to us.”

“I get so worked up I can’t sleep, the overwrought actress admitted.

You know I lie in bed at night, thankful that Jane Fonda isn’t lying in bed next to me.

Fonda immediately launched into a broadside against the fossil fuel industry, claiming that they “knew” their product was “causing” global warming over thirty years ago and accused them of being “worse” than big tobacco.

“The difference is that tobacco companies were primarily harming people who smoke. The fossil fuel companies are harming the entire planet and all its inhabitants,” Fonda dramatically intoned.

Fonda went on to accuse the Koch brothers and conservative think tank the Heartland Foundation of pushing “false science” to ally the fears about global warming.

The actress went on the attack against fracking and American energy independence and the Republicans that support them, such as Pennsylvania Sen. Pat Toomey.

“Several Republicans, notably Sen. Pat Toomey of Pennsylvania, have introduced resolutions prohibiting a unilateral moratorium on fracking by a president – just in case – next November a pro-climate president is elected,” she said.

The actress went on to accuse the U.S. energy industry of committing “crimes against humanity and the earth'” THen added that these companies are harming working-class families, people of color and indigenous groups, as well as plant and animal life.

“Because we didn’t act 40 years ago,” Fonda warned, “We don’t stand a chance of changing course in time without profound, systemic economic and systemic change. And they say we have at best 11 years before the tipping point is reached. Eleven years to reduce fossil fuel emissions roughly in half. And then continue to reduce them to net-zero by 2050,” she exclaimed.

If all we have is 11 years we should all be redoing our mortgages, get a 12-year-balloon mortgage. Therefore if they’re correct we don’t have to pay anything until after the world ends.

The extremist left-wing actress then insisted that global warming isn’t just about the environment, and she then sent on to throw in a list of long-time, left-wing shibboleths to describe what she really wants.

“Yes, we are facing a climate crisis,” the multi-millionaire actress proclaimed. “But we’re also facing an empathy crisis. An inequality crisis. It isn’t only the earth’s life support system that is unraveling. The fabric of our society is unraveling.”

“This is going to take an all-out war on drilling, and fracking, and de-regulation, and racism, and misogyny, and colonialism, and despair, all at the same time,” Fonda screeched. She added that we can’t solve climate change without addressing “inequality and injustice.”

The Barbarella star went on to claim that President Franklin Roosevelt’s 1930s era New Deal policies went on to save the American economy from the Great Depression. This is a long-held claim by leftists that does not stand up to scrutiny. Many economists now say that the New Deal actually prolonged the depressions in the U.S.A.

Fonda used her praise of FDR’s New Deal as a basis to advocate for the Green New Deal, the vague green energy plan championed by freshman progressive New York Democrat Congresswoman Alexandria Ocasio-Cortez. FDR’s New Deal didn’t work. As late as 1938, nine years into the depression, almost one out of five workers remained unemployed. What the government gave with one hand, through increased spending, it took away with the other, through increased taxation. But that was not an even trade-off. As the root cause of a great deal of mismanagement and inefficiency, the government was responsible for a lost decade of

Admitting that the cost of this Green plan is tremendous, Fonda insisted that the cost is negligible compared to the “total cost of billion-dollar weather and climate events” that will confront us over time. Perhaps Jane should do some reading because may studies have reported that major climate events such as hurricane s have nothing to do with a change of climate. With that in mind, Fonda exclaimed, “we can find the money.”

But supporting the Green New Deal was not all Fonda demanded. She also called for the prosecution and jailing of all who disagree with her. I guess that means me.

“Now, because of the fossil fuel industry, it’s too late for moderation,” she bellowed. “And given the emergency, it’s those who believe in moderation, in pre-Trump business as usual, who are truly delusional. And those who lie and continue to lie about what they’re doing to the environment should be put on trial, not awarded tax cuts and made secretaries of state.”

Fonda closed urging people to increase their activism and encouraged the press to talk more about climate change to pass on the propaganda she hopes will convince people to accede to her demands for social change and throwing Americans like me in jail.

Watch the video of Hanoi Jane talking about climate change, below:

Parts of this post was first seen at Godfather Politics