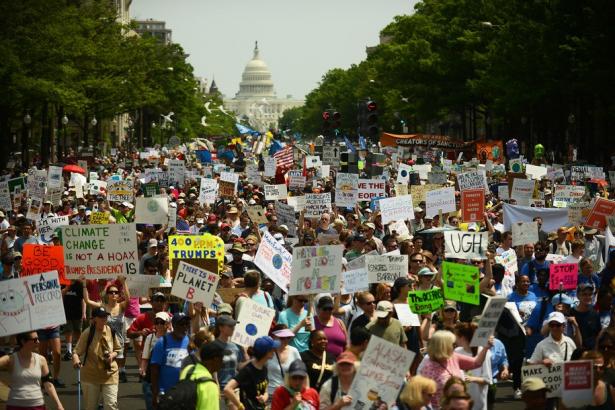 The climate crisis has long been escalating. With temperatures, sea levels and climate refugees all on the rise, it’s difficult to imagine a more terrifying trajectory.

But we’ve reached a new level of existential threat. Because now, some elements of the right wing are using the crisis to advance eco-fascism -an ideology that sees climate change migrants as a threat to “our America.”

Given domestic politics and worldwide climate catastrophes like the hurricane that upended my life seven years ago, it’s a predictable yet disturbing alignment. It’s hard to overstate how ghastly the Trump administration’s environmental policies are, from gutting regulations on power plant emissions to abandoning the Paris Agreement, which would have held the increase in the global average temperature to well below a devastating two degrees Celsius. But despite Trump’s unprecedented claim that climate change is a Chinese plot, climate denialism-the dismissal of global warming and human behavior as its primary cause-has long been a badge of honor for the Republican Party.

And they’ve found their biggest allies in energy corporations, their lobbies and conservative interests. For decades, the industries that profit off unregulated carbon dioxide (CO2) emissions have collectively spent billions to undermine public trust in climate science. This profiteering cohort is largely made up of the fossil fuel lobby, the Koch brothers, industry advocates and conservative think tanks like the Competitive Enterprise Institute, The George C. Marshall Institute, and the Heartland Institute. The cohort is led organized campaigns to convince the public that global warming was a hoax. More than 90% of papers skeptical on climate change originate from right-wing think tanks, according to 2016 research by Spanish scholar Jordi Xifra, who studies lobbying, public relations, and diplomacy.

These institutions bankrolled narratives designed to breed widespread skepticism and confusion. Climatologist Michael Mann has referred to these narratives as the “six stages of denial”: false reports that CO2 emissions aren’t increasing, increases aren’t proven to cause climate change, global warming is due to natural causes, human impact is not a major factor, climate change doesn’t have to be negative, and that any damage to the environment can easily be reversed by technology.

Their efforts paid off. They successfully set the terms of the debate and consequently stonewalled life-saving solutions to climate change. Conservative and liberal media outlets alike spread their false narratives, and the majority of politicians deemed the climate crisis too polarizing to tackle. Today, it’s the most controversial issue for the U.S. electorate, recently surpassing abortion in political divisiveness.

But this sustained campaign of mass misinformation may not be the darkest part of right-wing climate politics. Because now, some former climate deniers are starting to accept that climate change is real-and they’re using it as an opportunity to advance eco-fascism.

The evolution of eco-fascism is inextricably tied to white supremacy and its deep hatred of Black and brown folk. Spearheaded by white nationalists, we’re seeing the far right slowly shift away from outright denialism. Now, they understand, climate change could potentially uproot hundreds of millions of people, most of whom will be poor and most of whom will not be white. Where are they going to go other than to wealthier and whiter countries with more temperate climates?

That’s the crux of eco-fascism: If white nationalists can convince Americans to fear the people coming here, it opens the door to the kind of militarized, authoritarian government that they have always wanted. White nationalists look forward to fighting a kind of global race war, and climate change is making some of them think they will get their chance sooner rather than later.

And we’re already seeing its lethal effects. Mass shooters in Christchurch, New Zealand, and El Paso both cited mass migration stemming from climate change as a driving force for their killing sprees. Far-right pundits are taking great leaps to blame immigrants-and often people of color in general-for anything from litter to the opioid epidemic.

As far-right author and media pundit Ann Coulter tweeted in 2018, “I’m fine with pretending to believe in global warming if we can save our language, culture and borders.”

This is the political moment we’re in as we go into 2020. On the right, we have the Trump administration, whose determination to burn every ounce of coal, oil and gas this country can produce is a commitment to ecological devastation that will cause the deaths of millions.

And on the alt-right, we have ethno-fascists who would rather displace hundreds of thousands of families as a pretext for their radical ideological fantasies than admit a global-scale political intervention is necessary to pre-empt disaster.

But rather than fight for solutions that meet the scale of this existential crisis, many in the center-left instead side with the multibillion fossil fuel lobby. Take Joe Biden’s ” middle-ground” climate policy, which will allow fossil fuel executives to continue profiting off the destruction of our planet-the same corrupt executives Biden is taking money from. This relationship is likely to continue should he become president, seeing how his climate advisor has taken more than $1 million from the dirty energy lobby. Or take Nancy Pelosi’s dismissive mocking of the Green New Deal, despite the broad support it has received from Democratic voters.

Climate change is the single biggest threat to our future. The moderate left is offering little in terms of solutions. Meanwhile, the alt-right’s solution is to organize around racial nationalism, targeting Black and brown folk and driving us all toward the type of global race war they’ve been itching to start.

This status quo is already paving the way for global destruction. Because it’s this exact brand of divisiveness that’s stopping us from coming together to pass any meaningful climate agenda, let alone a transformational Green New Deal powerful enough to save the world.

If we’re truly all in on the fight against climate change, we can’t let the right continue to set the rules. We need to take the fight outside of the systems and institutions they use to keep us separate, quiet, and powerless. Which is why, as leaders of the progressive left, it’s our political and ethical imperative not just to organize across race and class, but to build a multiracial climate justice movement that puts the power back in our hands.

That’s why a Green New Deal is critical for 2020. It’s the only climate agenda that restructures political and economic power, and redesigns the systems that have stripped so many of us of our agency over our future. It’s not just a set of bills to reduce emissions. It’s a vision for a new type of economy, one that reverses growing inequality and rejects the idea that there will always be a concentration of power at the top. One that doesn’t just give Black and brown folk, immigrants, and working-class families an economic boost, but creates systems to ensure that our health, dignity, and welfare will be prioritized for generations to come.

That’s the only solution that matches the scale of this existential crisis: a multiracial, cross-class movement to restructure power and build an economy for the many, not the few.

It’s about more than political strategy or legislative know-how. When faced with the immense hatred, racism, and xenophobia coming from the right, we must root ourselves in radical solidarity, generosity, and love. To fight a movement fueled by racial division, we must build a multiracial movement that crosses every line of difference between us-a movement united by a common belief that we all deserve to thrive, no matter who you are, what you look like, where you come from, who you love, or how much money is in your pocket.

[Maurice Mitchell is national director of the Working Families Party and a senior fellow at Prism. You can follow him on Twitter @MauriceWFP.]

This story is part two in a four-part series by the author. Check back soon to read the next segment on demystifying the Green New Deal, and stay tuned to make sure you don’t miss the final piece on how local organizing can help us save our planet.