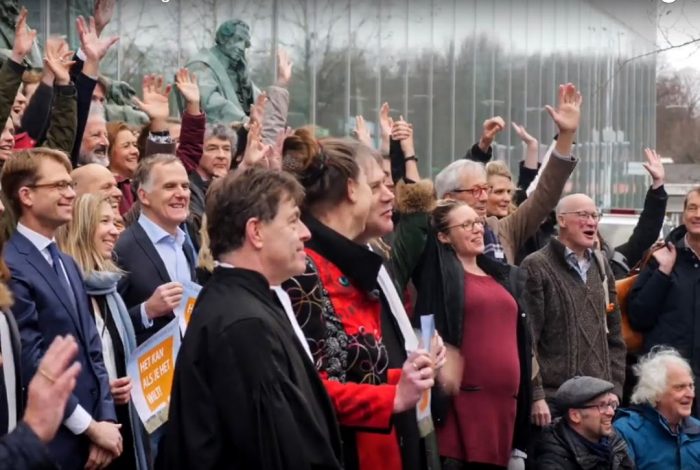 The Supreme Court of the Netherlands ruled that the Dutch government must do more to reduce greenhouse gas emissions. The judgment is final. Photo credit: urgenda / YouTube

Can ordinary citizens use the courts to force their leaders to fight climate change? In the most revolutionary climate ruling to date, the Supreme Court of The Netherlands delivered an emphatic “yes” on December 20, upholding a court order forcing the Dutch government to cut national carbon emissions.

In the wake of the decision, a group of children and young people in the US is hoping to gain traction in a similar legal battle ( Juliana v. United States) as they claim the right to live in the same climate as previous generations.

Some 886 Dutch citizens – supported by the environmental group Urgenda – started their court battle against the government with a 2013 court summons for “knowingly contributing” to global warming and endangering their lives. They won their case, Urgenda v. the State of The Netherlands, in 2015. . Between 2015 and 2019, while the Dutch government tried to have a higher court overturn the landmark Urgenda ruling, global emissions of CO2 grew by 20 percent. They were the five hottest years ever recorded.

The 2015 Urgenda decision cited the scientific consensus on global warming and ordered the Dutch government to cut carbon emissions by at least 25 percent (below 1990 levels). It was based on the UN’s Intergovernmental Panel on Climate Change (IPCC) recommendation of a 25-40 percent reduction by developed countries to avoid a critical 2°C rise in global temperatures.

In upholding the unprecedented decision, the Dutch Supreme Court said its judgement was based on the universal duty to refrain from doing harm (Tort law), the European Convention on Human Rights – Articles 2 and 8, the right to life and the right to respect for private and family life – and the UN Climate Convention. The ruling that people have a fundamental right to protection from climate change victory could resonate profoundly in lawsuits over carbon emissions in many other countries.

Having exhausted all appeals, the Dutch government is expected to struggle to meet the emissions deadline. It has already closed one of the nation’s five coal-fired power plants and launched new subsidies for renewable energy. It will reduce the speed limit on highways from 130 kph (80 mph) to 100 kph (62 mph).

Roger Cox, the attorney who represented Urgenda in its initial proceeding against the Dutch government in 2013, told WhoWhatWhy he believes the courts are our last chance because everything else has failed. The Netherlands is one of at least 28 countries where lawsuits seek to hold either governments – or fossil fuel companies – accountable for the effects of climate change.

In the absence of laws and policies to reduce carbon emissions, climate scientists are bluntly saying it’s time to panic.

“I hope this win, from a legal perspective, will create leverage in other cases around the world, not only in cases against countries’ governments but also oil majors,” said Cox, who is now leading a Friends of the Earth’s case against Shell Oil.

Ironically, the fact that a quarter of The Netherlands is below sea level does not seem to have played an important role in the Dutch court’s deliberations.

According to Cox, the decision “is more about the global effects, and sea level rise is only one of them, along with the destruction of whole ecosystems, the melting of glaciers and the danger to food supply from extreme weather events. I think what worries the courts and our judges is the danger of tipping points that will irreversibly create dangers we can do nothing about anymore. The danger is there if we don’t reduce emissions ambitiously enough.”

In the absence of laws and policies to reduce carbon emissions, climate scientists are bluntly warning that it is time to panic. The latest United Nations climate report calls for “radical transformations” because planet-warming emissions, if not cut radically over the next decade (7.6 percent per year, something no country has ever achieved), will cause mass extinctions and make parts of the planet uninhabitable. If a serious effort had begun in 2010, it says, the cuts required to keep global warming below 2°C and 1.5°C, respectively, would only have been 0.7 and 3.3 percent per year.

So far, commitments from states to cut carbon emissions have come in the form of international treaties, leading to decades of broken promises. The international community agreed, in the 2015 Paris climate accord, to hold global warming to “well below” 2°C (3.6°F) compared with pre-industrial levels. But the current rate of warming will raise the earth’s temperature by almost twice as much.

The Dutch Supreme Court shocker comes on the heels of failed negotiations on collective climate action at the latest UN Climate Summit (COP 25) in Madrid.

“The point of no return is no longer over the horizon,” said UN secretary general António Guterrez. “It is in sight and hurtling toward us.”

He admitted that, after 25-plus years of negotiations, world leaders still do not have the “political will” to stop climate chaos.

The mass resistance by young people against government-sanctioned climate change that took off last year caught the world by surprise. A global wave of school strikes culminated in the largest youth-led demonstrations in history during the week of September 20-27. Millions of people took to the streets in 150 countries. But it is as if “nothing has happened,” according to teenage climate activist Greta Thunberg. “The crisis is still being ignored by those in power.”

With Thunberg, practically unknown last year, making the cover of Time magazine – the youngest Time “person of the year” ever – and the emergence of groups like Fridays for Future, the Sunrise Movement, Extinction Rebellion Youth, Zero Hour and Youth v Apocalypse, climate change suddenly seems to be about intergenerational conflict.

But young people around the world have been confronting their governments for several years now – in court. Many of them were inspired by the landmark Urgenda case and/or Juliana v. United States, a federal lawsuit filed in 2015 in Eugene, Oregon, by a non-profit specializing in climate litigation, Our Children’s Trust. The 21 young plaintiffs, aged 8 to 19 at the time, are often referred to as the “climate kids.”