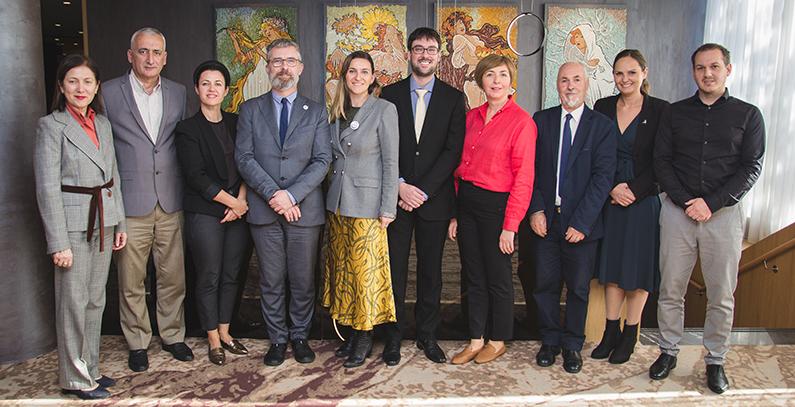 Alongside many activities within the regional projects in the field of environment, biodiversity and climate change Germany’s development cooperation fosters the collaboration in a new format in the Western Balkan. Under the auspices of the Regional Cooperation Council’s (RCC) Working Group on Environment, the Biodiversity Task Force of South East Europe (BDTF SEE) was established end of 2017 for technical and advisory support in the territory at the gates of the European Union.

The BDTF SEE works on integration of biodiversity concerns into developmental goals. The interdependence of actors from different levels will be inevitable for achieving the 2050 vision of living in harmony with nature. The anniversary and the reflection on the changes so far come ahead of significant milestones in the timeline for the environment sector, particularly for combating biodiversity loss and its conservation.

The year 2020 marks a milestone in terms of biodiversity and development globally, thus also in South East Europe. The Convention on Biological Diversity (CBD) with its 20 Aichi targets covers the period until 2020, the six targets of the European Union’s Biodiversity Strategy are set until 2020 and the RCC also adopted the South East Europe Strategy with its Dimension J on Environment until 2020.

What led to the creation of the Biodiversity Task Force?

In response to the global loss of biodiversity and the agreement of the international community to increase efforts in achieving targets of the strategic plan for biodiversity until 2020, Germany’s Federal Ministry for Economic Cooperation and Development (BMZ) commissioned the Deutsche Gesellschaft für Internationale Zusammenarbeit GmbH (GIZ) to support SEE in its effort to fulfil international obligations for the preservation of biodiversity. The GIZ/Open Regional Fund for South-East Europe, ORF in short, begun a three-year regional project on biodiversity – ORF BD in 2015. In 2018, it was followed by the new ORF – Implementation of Biodiversity Agreements (ORF BDU) to last until 2021. 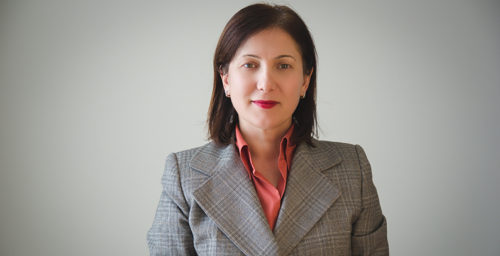 We all live on Earth and share it. By looking in detail at all of its constituent elements, we will better understand its great values. Due to the wide range and unique integration between plant communities and habitat types, the Western Balkans have an extraordinary wealth of diversity. Biodiversity is the foundation of ecosystem services closely related to human well-being. Regional cooperation priorities and biodiversity protection initiatives can only be addressed through a comprehensive approach that extends far beyond the borders of the region. It is the primary target for the BDTF SEE. Respect for the boundaries of nature should be the basic principle for economic progress. The Regional Cooperation Council organized the 9th Meeting of the Regional Working Group on Environment in Tirana on July 2. Chairing the BDTF SEE, Albania took part in the meeting with a presentation on the activities and regional priorities for 2020. The main purpose was the contribution of the regional dimension coordinators. The agenda faces numerous challenges toward 2030. BDTF will have an ambitious task to address the alarming rate of biodiversity loss, the increasing impact of climate change and the overconsumption of natural resources.

The previous ORF BD, as well as the current ORF BDU, seek to establish strategic partnerships with regional stakeholders and create alliances with structures and initiatives working in the field in order to build on existing national, regional and international commitments of parties and expedite progress with joint efforts. The Regional Office for Eastern Europe and Central Asia of the International Union for Conservation of Nature (IUCN ECARO) and the World Wide Fund for Nature’s Adria complement the projects in the region along with other sectoral biodiversity-benefiting and biodiversity-impacting projects of GIZ portfolio in South East Europe. They provided a solid foundation and allowed fast-forward movement on the establishment of the BDTF SEE. In particular, the IUCN ECARO project Towards Strengthened Conservation Planning in South-Eastern Europe, funded by MAVA Foundation, aims to lift standards by supporting institutional development and creating a policy-oriented regional platform.

The RCC Secretariat proposed the establishment of a biodiversity task force in December 2016. Another meeting was held next June in Belgrade and the BDTF terms of reference were endorsed two months after that. The constitutional event was organised on November 14, 2017, also in Serbia’s capital city.

The BDTF SEE was acknowledged three days later by the Ministerial Declaration on the occasion of the Second High-Level Panel on the Environment and Climate Action during the Bonn Conference of the United Nations Framework Convention on Climate Change (UNFCCC).

The BDTF SEE is composed of focal points and deputy focal points with expertise in biodiversity and related intervention fields, nominated by governments of Albania, Bosnia and Herzegovina, Kosovo*, Montenegro, Serbia and North Macedonia. IUCN ECARO acts as the BDTF SEE Secretariat.

Although the SEE governments have developed policy and legal frameworks for the conservation of biodiversity, the operational implementation is lagging behind. The BDTF SEE is centered on themes of integrating ecosystem services assessment and valuation (ESAV) into development planning, enhancement of biodiversity information management and reporting (BIMR) systems, dialogue with parliamentary groups and committees in the region on biodiversity-relevant topics and, last but not least, strengthening of the regional network of 14 biodiversity-related civil society organizations – BioNET.

Capacity-building modules, case studies, formulated regional policy documents and recommendations demonstrate how biodiversity contributes to the political economy and inclusive governance in the region. Major focus of the ESAV was to strengthen capacities of institutions, organizations and individuals in the region for emerging the concept of ESAV, to enable them to apply the region-relevant tools and methodologies in their daily work. A stepwise approach, including training of trainers, is implemented to guide participants from various institutions, using best practices worldwide.

Followup actions cover the development of further guidelines on the application of ESAV into decision making and region-tailored ESAV curricula.

Two innovative pilot case studies have been conducted – Streams of Income and Jobs: The Economic Significance of the Neretva and Trebišnjica River Basins, and Integrating Biodiversity and Ecosystem Services Assessment and Valuation in Bosut Forests area. The cross-cutting approach enabled the BDTF SEE to summarize the current state of knowledge on ESAV in SEE and bring in new case studies and regional recommendations for the Intergovernmental Science-Policy Platform on Biodiversity and Ecosystem Services (IPBES) regional assessment and presentation at 7 th IPBES Plenary.

Limits in technical capacities including data standards and systems resulted in vertical and horizontal information loss and high inefficiency. The work was carried by the complementary BIMR regional scientific platform. BIMR brings the evidence-based approach forward and finds common ground for improved data management and reporting. The detailed participatory baseline assessments were undertaken to analyse the current stakeholders’ situation, policy, legal and institutional framework as well as information system set-up in the region. They were followed by the development and adoption of BIMR regional guidelines, aiming to improve existing systems in managing data and reporting on species diversity, ecosystems and genetic diversity. They were piloted via information systems for nature conservation in Bosnia and Herzegovina, Montenegro and North Macedonia.

The list of endemic taxa and the regional recommendation paper were endorsed by the BD TF to further enhance BIMR. A focused partnership with the Global Biodiversity Information Facility (GBIF) and later with the Distributed System of Scientific Collections (DiSSCo) provide mutual benefits and certainly add value to the emerging BD TF and BIMR science-policy interface.

A position paper with a primary focus on the EU Biodiversity Strategy 2020 was produced by BioNET to assist in biodiversity conservation as part of the EU accession process. In coordination with the BDTF SEE, the gender-based review of key national biodiversity-related strategies and reports was carried out by the group.

The regional findings, case studies, recommendations along with region-specific know-how were summarized by the BDTF SEE and contributed to the Post-2020 process, started within the regional position paper to the High-Level Segment and side-event at the CBD Fourteen Conference of Parties (CoP 14), and followed by regional contribution to First Open-ended Working Group meeting, side-event at Twenty Third Subsidiary Body on Scientific, Technical and Technological Advice (SBSTTA 23) and set of relevant processes on finances for biodiversity.

Furthermore, the BDTF SEE is initiating the discussion with other relevant regional platforms globally on a strategy to integrate the regional perspective and cooperation mechanisms in the Post-2020 Global Biodiversity Framework.

From regional cooperation to regional policies

The overarching strategy to catalyse cooperation for biodiversity is following a multi-actor approach involving political decision makers, scientific experts and social opinion leaders. Ultimately, coherence is created among the peers enabling debate among the different stakeholders.

Cooperation is based on different principles, like sharing experiences or achieving a common goal, meeting accession criteria for joining the EU. 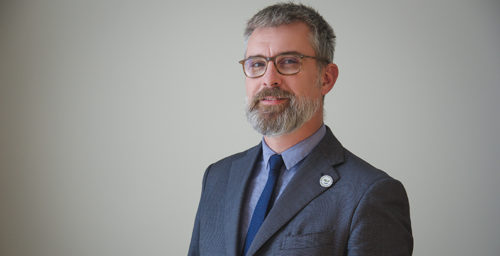 With all the benefits and opportunities triggered by regional cooperation, it comes as no surprise the traction the SEE Biodiversity Task Force has gained in the first few years of its existence. There is a strong sense of ownership with participating economies about this regional process and readiness to operationalize it to its full capacity, including positioning it at the centre of regional discussions on the post-2020 framework and the 2030 Agenda for Sustainable Development.

Therefore, at the policy level, the BDTF SEE agreed a set of common regional priorities and to enhance capacities for mainstreaming biodiversity concerns into the development planning. This includes moving from the uni-sectoral to the multi-sectoral cooperation, cost-effective budgeting and finances of biodiversity, as well as communication and outreach.

The call for new associated members is open-ended. Agencies, organizations, bodies and individuals are encouraged to apply.

Inherent is the idea of creating an overarching responsibility by expanding regional cooperation. Especially in the context of biodiversity, joint efforts are needed to curb environmental changes which negatively impact our and future generations’ opportunities for economic, social and cultural development.

Consequently, the ORF BDU serves the six economies’ needs regarding the fulfilment of the international and EU-relevant obligations towards preservation of biodiversity. Thereby, the promotion of peer-to-peer learning and the creation of exchange platforms support knowledge sharing. The assistance in meeting the criteria of chapter 27 – environment of the EU acquis is contributing to the common effort in fulfilling relevant criteria for joining EU.

Therefore, an approach allowing learning from experiences from within the region, promoting a strong partner dialog, as well as strengthening individual and institutional capacities is needed. It facilitates not only the regional cooperation for its own sake, but it supports the whole Western Balkan region in fulfilling obligations for the EU accession as well.

Regional cooperation might be a transformative change, but it is essential for curbing biodiversity collapse and halt loss. And in any case, an understanding and practice of cooperative collaboration are beneficial for being part of a community of states on a European level. 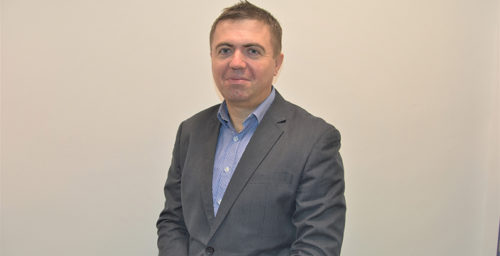 Nature doesn’t recognise borders. Rivers flow from country to country and migratory birds are here today but hundreds of kilometers away tomorrow. Only through coordinated efforts and pooling of resources we can help to protect our natural heritage. This is precisely the aim of the BDTF SEE. While I chaired BDTF, one of the biggest achievements was at a side event on the frame of COP 14 of the UN Convention on Biological Diversity held in Egypt in November 2018, with the title Capitalizing on Regional Cooperation for Post-2020 Dialogue. Catalysing ideas on the role of regional cooperation in the implementation of the Aichi Biodiversity Targets and in shaping the agenda helped mobilize resources towards the Post-2020 Biodiversity Framework. BDTF will continue to work on implementation of actions from the EU Green Deal, which aims to transform it into a fair and prosperous society, with a modern, resource-efficient and competitive economy where there are no net emissions of greenhouse gases in 2050 and where economic growth is decoupled from resource use. It aims to protect, conserve and enhance the natural capital and protect citizens from environment-related risks and impacts.