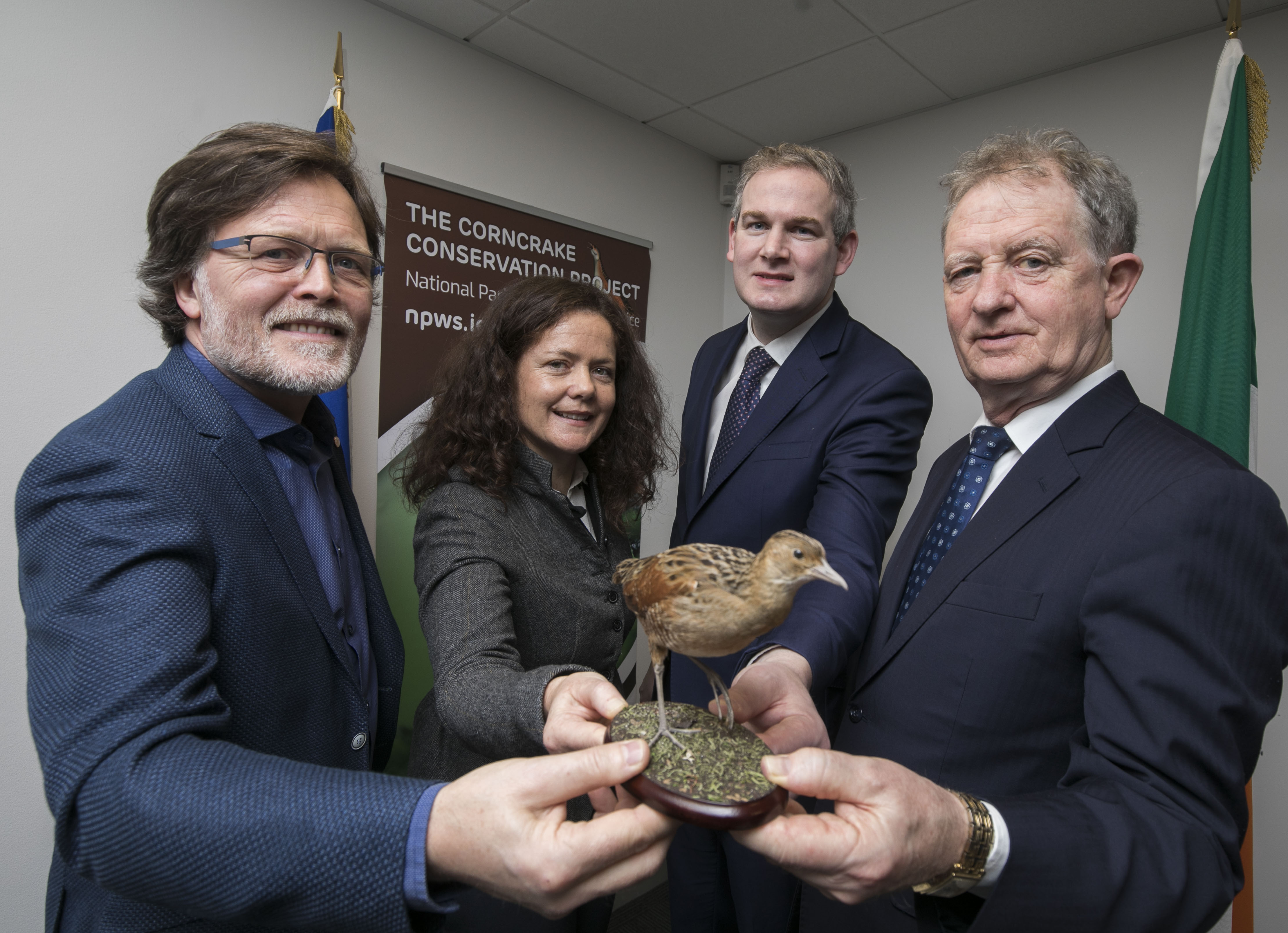 The Minister for Culture, Heritage and the Gaeltacht, Josepha Madigan TD, today welcomed the announcement of €4.3m in EU LIFE funding, awarded to her Department’s National Parks and Wildlife Service (NPWS), for a project focused on improving the conservation status of Corncrake in Ireland.

Corncrake is a species listed for special protection under Annex 1 of the EU Birds Directive. Once synonymous with the Irish countryside, the population of Corncrake has declined by 85% since the 1970s, with a similar decrease in range, meaning that the species is now effectively confined to Connacht and Donegal, including offshore islands. Supporting Corncrake in these remaining strongholds is critical to the survival of this species in Ireland.

The Minister noted that

this funding demonstrates the ongoing importance of the EU LIFE programme in assisting national governments to drive forward and support large-scale projects that have a regional or local focus, particularly in rural or peripheral areas. This funding will allow my Department, working in concert with stakeholders across Government and the communities in question, to put concrete and sustainable measures in place to help secure the future of this species, which has a special place in Irish culture.

The Head of the European Commission’s Representation in Ireland, Gerard Kiely, commented that

this project to enhance the conservation status of the Corncrake will benefit from €4.3m in funding from the EU’s funding instrument for the environment and climate action: the LIFE programme. Protecting biodiversity is a major priority for the European Commission, particularly in the context of President Ursula von der Leyen’s Green Deal.

The €5.9m budget ‘LIFE Atlantic Crex’ project is due to commence in January 2020 and will run for five years. The project will see conservation work funded in project sites in counties Donegal, Mayo and Galway. Working in partnership with landowners, the Department of Agriculture, Food and the Marine, Údarás na Gaeltachta, Galway-Mayo Institute of Technology and Fota Wildlife Park, the project aims to deliver a 20% increase on the 2018 population of Corncrake recorded in Ireland by 2024.

The decline in Corncake numbers is of significant conservation concern in Ireland. Conserving species in their natural habitats requires a strategic approach to succeed. I am committed to this project, which demonstrates synergies between my Department’s strategic goals of protecting our natural heritage and facilitating sustainable development of island and rural communities.

During 2019 we have introduced a number of significant measures to protect and promote Ireland’s biodiversity: introducing an order obliging all public bodies to report on their efforts to protect biodiversity; increasing funding for community groups’ biodiversity projects and; a €7m investment to accelerate peatlands restoration and conservation.

The Government Chief Whip and Minister of State for the Irish Language, the Gaeltacht and the Islands, Seán Kyne TD, visited the European Commission Office today in Dublin to meet with representatives and members of the Department’s National Parks and Wildlife Service who have been involved in the Corncrake Conservation Programme and who will be active in this project. Minister Kyne said

the National Parks and Wildlife Service is to be commended for their conservation work, particularly in this area. This EU Life funded project is a vital lifeline and will enable the NPWS to deliver on the conservation objectives to secure the future of this iconic breeding bird in rural Ireland.

Corncrake is listed as a protected species on Annex I of the Birds Directive. The Corncrake’s breeding range extend from Ireland to Asiatic Russia in the northern hemisphere. The Corncrake winters in southern and eastern Africa, migrating northwards to arrive on its breeding grounds from early April onwards and departing again in August and September. Due to the large decreases in both numbers and range, it is on the Birds of Conservation Concern in Ireland (BoCCI) list.

Corncrakes require managed habitat throughout the breeding season. Corncrakes require the cover of tall vegetation (>20cm) and are strongly associated with meadows which are traditionally harvested once a year in late summer, where they nest and feed. Annual cutting creates a sward with an open structure, which is easy for the birds to move through, but harvesting means they must find alternative cover adjacent to meadows later in the season. Farming therefore plays a key role in the establishment, maintenance and conservation of Corncrake habitat.

The most recent assessment of Corncrakes in Ireland, submitted in Ireland’s report to the EU under Article 12 of the Birds Directive, notes an 85% decrease in population since 1978 and a 92% decrease in range. The major causes of the dramatic deterioration in conservation condition since the 1970s are the move from hay-making to silage, the homogenisation of agricultural enterprises, increased fertiliser applications, reseeding of semi-natural grasslands and the use of larger, more efficient machinery and increased exposure to predation.

The fact that Corncrakes are now effectively confined to Donegal and West Connacht is a serious cause of concern and therefore supporting Corncrake populations in these remaining strongholds is critical.

The National Parks & Wildlife Service and the Department of Agriculture, Food and the Marine both offer schemes aimed at saving Corncrake:

Objective: To improve the conservation status in Ireland of Corncrake by enhancement of the Corncrake SPA network and surrounding farmland

Goal: 20% increase on calling male population by project completion, to 154

The Department of Culture, Heritage and the Gaeltacht is the coordinating beneficiary, with the following associated beneficiaries:

Department of Agriculture, Food and the Marine

The LIFE programme is the EU’s funding instrument for the environment and climate action. The general objective of LIFE is to contribute to the implementation, updating and development of EU environmental and climate policy and legislation by co-financing projects with European added value. For further details please see http://ec.europa.eu/environment/life/index.htm

DCHG has coordinated a range of other EU LIFE funded projects, included KerryLIFE, AranLIFE, BurrenLIFE and The Living Bog.