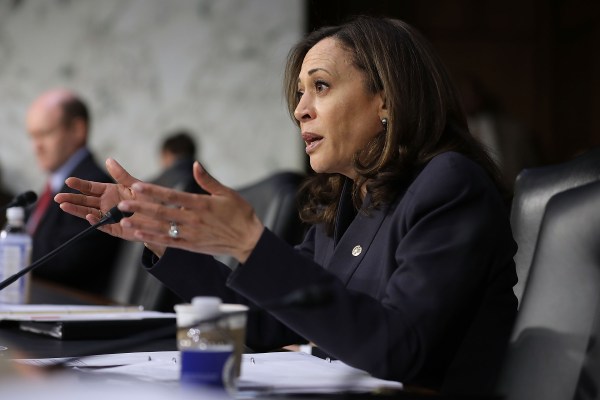 Senator Kamala Harris (D-CA) spent her portion of today’s epic-length questioning of Mark Zuckerberg getting the CEO to squeeze himself deeper and deeper between a rock and a hard place. He didn’t reveal anything particularly damning, but he also – with her help – made himself look ineffective and clueless.

Her questioning had Zuckerberg contradicting himself on a serious topic: how the decision was made in 2015 to not inform the 87 million users that their data had been improperly sold off. If he didn’t know about how that decision was made, what kind of leadership was that? But if he did know, then how could no conversation have taken place about the decision before it was made? It was one of the few times in the hearing where Zuckerberg’s prepared remarks proved wholly insufficient.

Harris, who sounded bored – as well she might be after some of the softballs that had been lobbed in Zuckerberg’s direction – began by saying that she was “concerned” by what she’d heard.

“During the course of this hearing these last four hours you’ve been asked several critical questions for which you don’t have answers,” she began.

We were also tracking the many, many times Zuckerberg declined to answer clearly or deferred with the standard “we’ll follow up.” For the record, Harris listed that Zuckerberg did not address:

But her main issue, aside from informing Zuckerberg that these points had not been forgotten, was to bring up the specific occurrence that in 2015, Facebook learned that the data of millions of users had been abused, and yet did not inform those users.

“A concern of mine is that you, meaning Facebook, and I’m going to assume you personally as CEO, became aware in December of 2015 that Dr Kogan and Cambridge Analytica misappropriated data from 87 million Facebook users. That’s 27 months ago,” she said. “However, a decision was made not to notify the users. So my question is did anyone at Facebook have a conversation, at the time that you became aware of this breach, have a conversation wherein the decision was made not to contact the users?”

Here Zuckerberg attempted the defense of not being able to know every conversation at Facebook “because I wasn’t in a lot of them… I mean, I’m not sure what other people discussed.”

Harris did not take the bait and when Zuckerberg attempted to steer the conversation towards the known facts of how Facebook responded in 2015, she pressed on:

“Were you part of a discussion that resulted in the decision not to inform your users?”

“I don’t remember a conversation like that,” Zuckerberg responded, and attempted to expand with “for the reason why-” only to be cut off by Harris again.

“Are you aware of anyone in leadership at Facebook who was in a conversation where a decision was made not to inform your users,” she asked, “or do you believe no such conversation ever took place?”

This was an excellent move. She’d limited Zuckerberg’s options to either admitting he was unaware of conversations among leadership choosing to withhold news of this data abuse from users (unrealistic), or admitting that leadership did not have those conversations (deeply troubling). Both reflect poorly on him, his executives, and the company. Zuckerberg prudently chose to plead ignorance.

“I’m not sure whether there was a conversation about that,” he said, yet immediately hit on a prepared line. “But I can tell you about the thought process at the time, of the company, which was that in 2015 when we hard about this, we banned the developer and we demanded that they delete all the data and stop using it, and the same with Cambridge Analytica. They told us they had-“

But Harris had no intention of allowing him to run out the clock with recycled, irrelevant statements, as he had many times in the previous hours.

“I’ve heard your testimony in that regard,” she cut in before finally taking her chance to bear down on him.

“But I’m talking about notification of the users. This relates to the issue of transparency and the relationship of trust – informing the user about what you know in terms of how their personal information has been misused. When you personally became aware of this, did you or senior leadership do an inquiry to find out who at Facebook had this information, and did they not have a discussion about whether or not the users should be informed, back in December of 2015?”

Zuckerberg was faced again with a poor choice, and instead opted for a show of humbleness.

“Senator, in retrospect I think we clearly view it as a mistake that we didn’t inform people, and we did that based on false information that we thought that the case was closed and that the data had been deleted.”

Harris jumped on this admission that “we did that”: “So there was a decision made on that basis not to inform the users, is that correct?”

“That’s my understanding, yes. But in retrospect I think that was a mistake and knowing what we know now we should have handled a lot of things here differently,” he continued, abjectly.

Harris politely dismissed this sad act (“And I appreciate that point”) and returned to business for one last question on this: “Do you know when that decision was made not to inform the users?”

So to sum up: in 2015, it became clear to Facebook and certainly to senior leadership that the data of 87 million people had been sold against the company’s terms. Whether or not to inform those users seems like a fundamental question, yet Zuckerberg claimed to have no recollection of any discussion thereof. That hardly seems possible – especially since he later said that they had in fact had that discussion, and that the decision was made on bad information. But he doesn’t remember when this discussion, which he does or doesn’t remember, did or didn’t take place!

While this poor showing likely doesn’t rise to the level of falsity, this blatant dissimulation by Zuckerberg results in him coming off looking like a liar and a sap. For a hearing where the Senators themselves were often the ones making fools of themselves, it was nice to see the shoe on the other foot. I look forward to Senator Harris’s continuing attentions – her parting shot was telling Zuckerberg and everyone else how subpar their answers to her 50 (!) written questions from a previous hearing were. Here’s hoping she gets answers.

You can watch the full video below (courtesy of ABC):