The cryptocurrency market has grown exponentially this year, with a current market cap of $440 billion at time of writing. The largest cryptocurrency is, of course, Bitcoin, which has gone up 1,500 percent year to date and trades a daily notional value of over $10 billion. But how much of this trading is attributed to real, human buyers, and how much of it is automated?

As it turns out, bots may make account for a large part of short-term holdings. Worse, bot trading could be freely manipulating the market, artificially inflating prices and causing individual investors to overpay on their executed trades.

What is a bot?

A bot is an automated trader that buys and sells automatically, usually in the short-term market. Because bots are preprogrammed, buying and selling without emotion when certain triggers happen, they are historically responsible for dramatic market crashes. The famous 1987 Black Friday Wall Street crash, where equities dropped over 30 percent in one day, was caused by program trading – the first generation of bots, which sold stocks automatically when they fell below a certain price.

Today, bots have become ubiquitous and are certainly not limited to the equities market. In the equities world some bots (commonly known as high frequency traders) are in fact welcomed because they provide liquidity to normal buyers and sellers of equities. But in the cryptocurrency world, not all bots are created equal, and many are not there to help you.

Bots and cryptocurrency: A perfect pair

Bots – ones much more advanced than those that caused the 1987 equities crash – infiltrated cryptocurrency nearly as soon as it began picking up steam. They are now prevalent across all cryptocurrency exchanges as individuals with programming skills look to take advantage of an opportunistic situation: an exploding market, a rush of relatively inexperienced investors looking to capitalize on that market, and little government regulation.

Case in point: Neo. With Ethereum’s 5,800 percent rise in 2017, investors piled into Neo, which is touted as the Chinese equivalent of Ethereum. And Neo quickly became prime territory for a trading bot to operate and take advantage of overly optimistic and inexperienced investors. On November 29, advanced crypto trading platforms began detecting abnormal signals that indicated multiple bots trading on Neo. The extreme volatility of the market coupled with dozens of bots trading simultaneously caused the price to crash within minutes of the first detected signals. Neo went from $34 to $3.74 in a matter of seconds, before returning to $34. Investors who bet big lost almost everything within a few bats of an eye. This kind of flash-crash has happened more than once and will likely happen again.

In other cases, bots can manipulate crypto markets by artificially inflating the price. Their automated trading behavior leads new traders in cryptomarkets to overpay for the coins they are buying. The classic “pump-and-dump” scheme that was popular in the early nineties and made famous by the Wolf of Wall Street Jordan Belfort is still being run effectively – by bots – in today’s crypto markets. This scheme involves coordinated purchases of low-priced coin to “pump” the price and attract new investors who are easily excited by the increase. As investors unknowingly buy “the pump”, bots dump the asset in near perfect coordination. With no new buyers coming into the market, the coin quickly loses value and investors are left scratching their heads – and agonizing over their wallets.

Unfortunately, this scenario plays out all too often in cryptocurrency markets. As Business Insider has reported, there is no shortage of coordinated schemes where a group of traders use bots to simultaneously purchase coins to drive up price. Investors hear about the coin, get caught up in the euphoria, and buy in, hoping to make a quick profit. What they are left with is anything but.

With more and more “retail” investors joining the crypto space in recent weeks, chasing the Bitcoin boom, it’s likely even more people will be susceptible to pump-and-dump strategies.

How to spot a bot

It can be extremely hard to detect where bots are at work without advanced analysis tools. They’re easier to spot in hindsight. Take a look at this snapshot of Bitcoin trading yesterday on Coinbase: 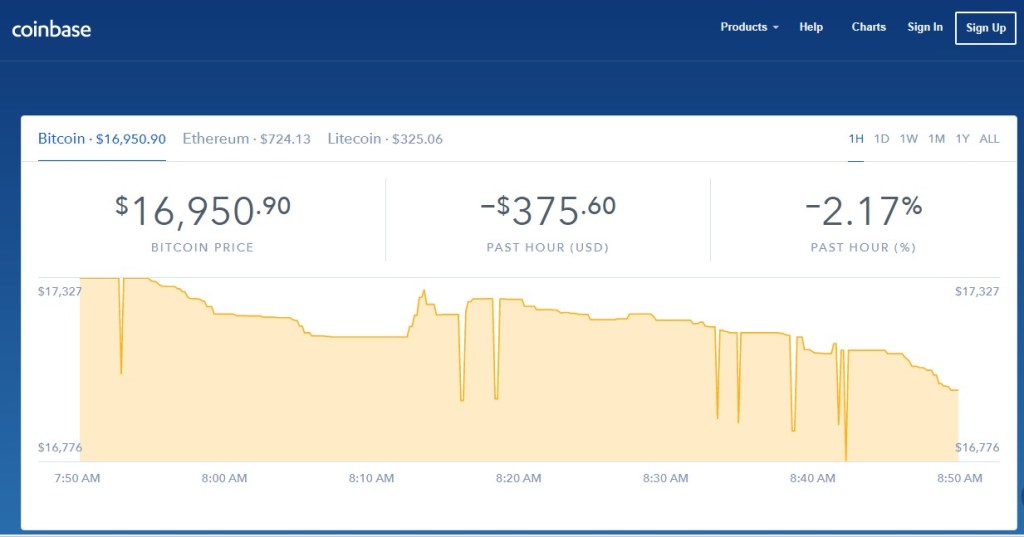 See those sudden steep drops in prices? Bots are clearly trading and manipulating prices in this instance. After matching up the price drops with their corresponding times and looking at the trading signals just before each flash crash, it’s clear that these dips are not normal, human trading behavior. (The dips aren’t purely the fault of bots, though. Coinbase predominantly consists of retail orders, so when the market is euphoric – as it is now – retail buyers get hit with FOMO, which causes more price volatility.)

Two of the biggest indicators of bot manipulation are price momentum and volume. If investors watch for these indicators to spot coordinated buy patterns early, they can avoid potential pump-and-dumps or flash crashes before they happen.

Here’s a quick look at a bot in action:

The people coding these bots usually stay pretty quiet about what they’re doing, but if you do your research on Reddit or Telegram, you’ll see people openly forming groups and teaming up to build bots. And if you dig deep into forums, in some cases you’ll find groups openly discussing price manipulation. The funny thing is that these individuals are often quite talented on the technical/programming side but lack the true financial know-how that could 2x, 3x even 4x their investments.

Cryptocurrency markets are here to stay, and it’s likely the bots are as well – as long as the market remains unregulated. There is already a large volume of trading bots operating in the market that the vast majority of investors aren’t aware of. As investors become more savvy, so too will the bots. And so we’re likely headed down the path of an arms race. As detection tools get stronger, developers will look for ways around detection. As bots get more advanced, platforms will accelerate research and development to counterattack. With regulation seemingly right around the corner, only time will tell which side will win the fight until the government steps in to stabilize the market and put an end to predatory bots.

Timothy Tam is cofounder of CoinFi, a cryptocurrency market intelligence platform. He was previously a Goldman Sachs equities trader and hedge fund manager.