Hearthstone is about to become a bit … creepier with the upcoming launch of The Witchwood, Blizzard Entertainment‘s eighth expansion for its market-leading card game. It hits just as the publisher is rotating several old sets out and Hearthstone is leaving the Year of the Mammoth behind for the Year of the Raven.

A new year of Standard and a new expansion mean new cards. Blizzard Entertainment and GamesBeat are revealing two today that work with the new even-odd mechanic coming with The Witchwood and legendaries such as Baku the Mooneater, which upgrades your hero power if you have just odd-cost cards in your deck.

The new cards are: Blackwald Pixie and Clockwork Automaton. 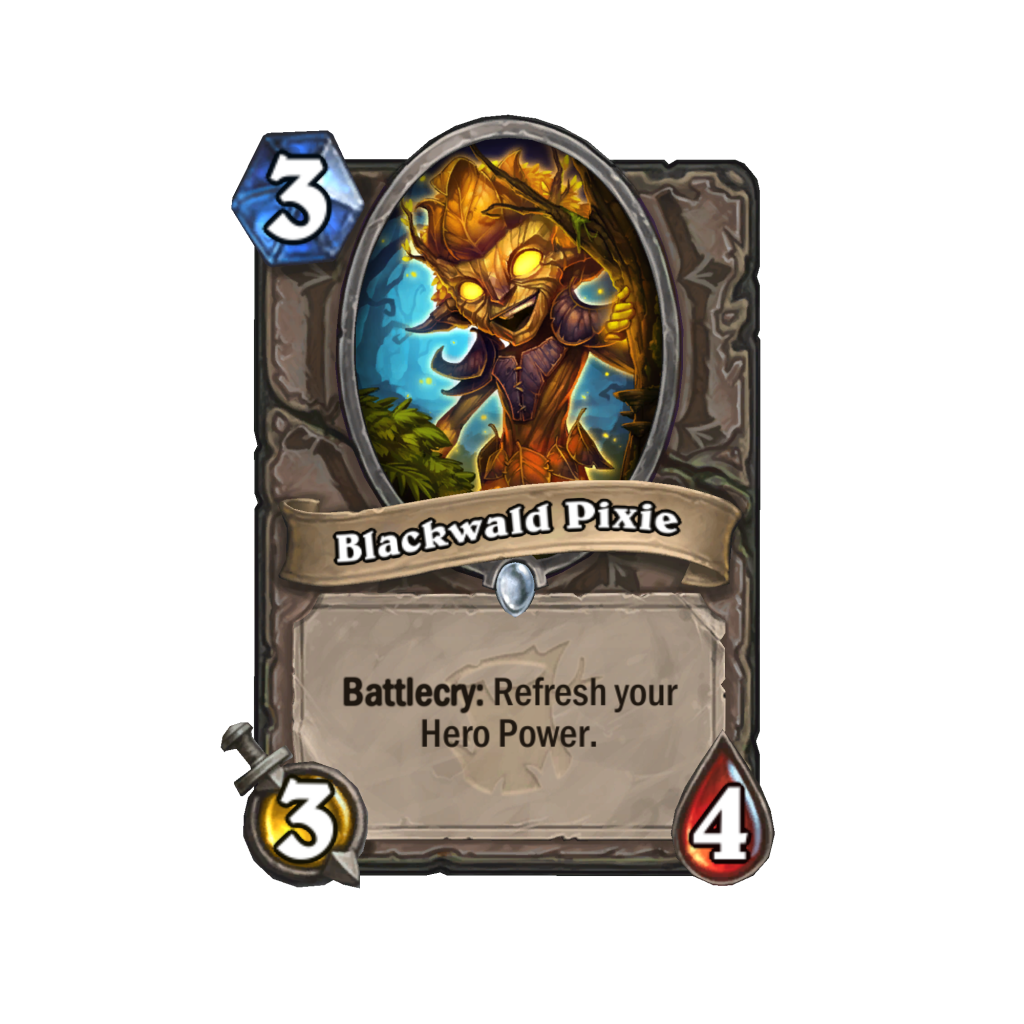 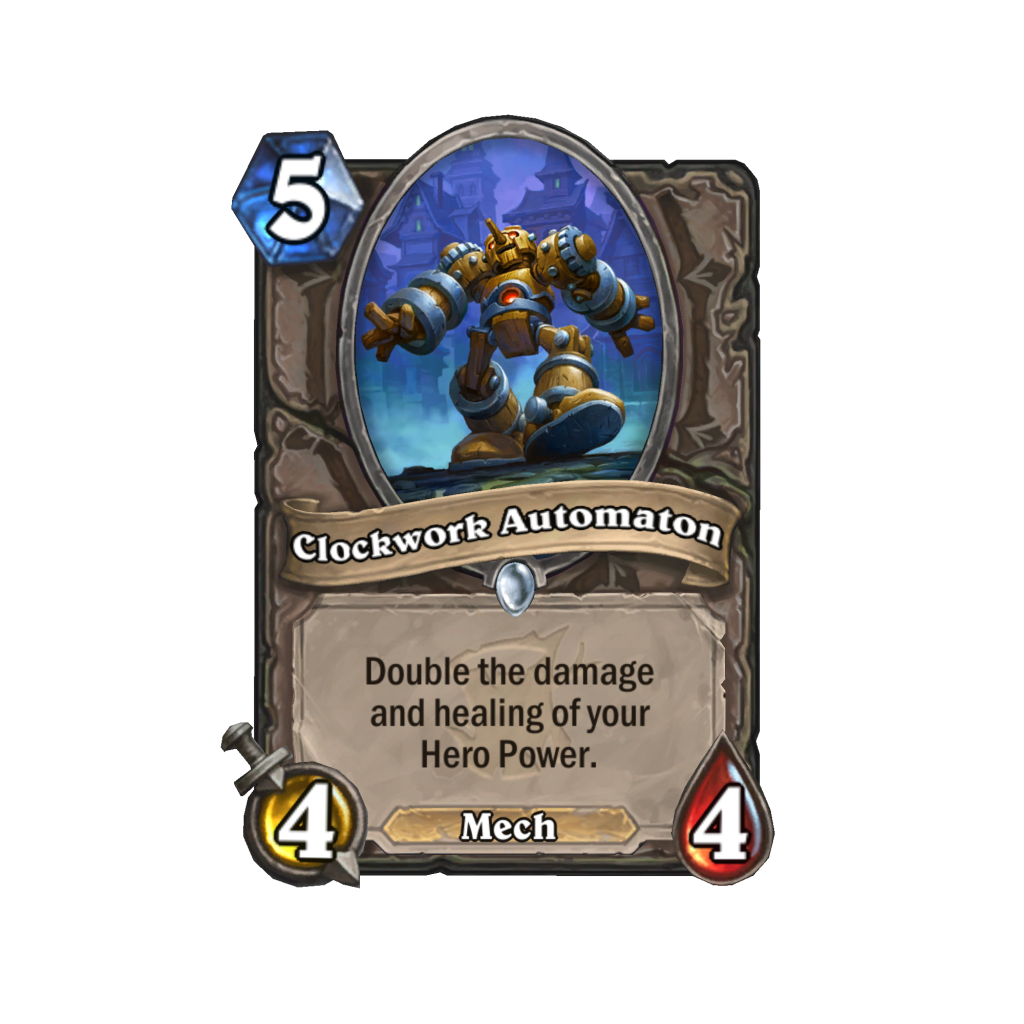 Blackwald Pixie, as Blizzard’s lore reads, “was turned dark and spooky by Hagatha the Witch of the Witchwood.” Hagatha is the new Shaman Legendary hero, and she figures prominently in the lore behind the expansion.

The Clockwork Automaton “is creepy, like one of those toys coming to life that you might hear about in a ghost story. The Toymaker in Gilneas is one of the ‘good guys’, but for some reason his toys are coming to life and walking the streets. Maybe because they are made using wood from the Witchwood.”

Blackwald Pixie’s Battlecry works with every hero power, but some aren’t as good as others. You could use the Druid’s twice, but you can only attack once, so you’d need to make sure you attack on the second use. You’d get two sets of Wicked Knife for Rogue, too, but again, you could only attack once. The automaton’s power works with Mage, Priest, and Warlock … but watch out with Gul’dan, because if you use it to draw a card, you’ll deal 4 damage to yourself.

Blackwald Pixie’s Battlecry also works well with the Death Knight hero powers. For Uther’s, you can summon two of the four Horsemen you need to win the game. Frost Lich Jaina, under the right circumstances, could end up with two Water Elementals from killing two 1-health minions with her power. And Thrall, Deathseer could evolve minions twice.

Blizzard offered a couple of examples of how the Clockwork Automaton would work with Baku.

At the Game Developers Conference last week, I broke down the design behind the Blackwald Pixie and Clockwork Automaton with Dean “Iskar” Ayala, a game designer on Hearthstone’s final design team, and Dave Kosak, the lead mission designer (he even brought his furry hat from the Witchwood announcement video, and after talking with him, it’s clear the personality and enthusiasm he brings onstage at Hearthstone events and in videos is genuine).

And yes, one of the possible consequences of Baku, Clockwork Automaton, and Blackwald Pixie is the return of … Quest Warrior, which we discuss below.

This is an edited transcript of our interview.

GamesBeat: Let’s start with these new cards: the pixie and the automaton. My first question, for Clockwork Automaton, it doesn’t work with Paladin or Warlock or Rogue or Druid or Warrior?

Dean Ayala: It does work with Warlock?

GamesBeat: It works with Gul’dan.

Ayala: Yeah, it works with him. But it also, if you play a normal Warlock, you’ll take 4 damage. So maybe don’t put it in that deck.

Ayala: Sounds pretty sketchy, but it does function that way.

GamesBeat: I was thinking, does it draw two cards?

GamesBeat: For the Wicked Knife for the Rogue, it doesn’t make a 2/2 knife?

GamesBeat: Were you worried about people abusing that with Boomerang, something like that?

Ayala: Not necessarily. It’s more about the card doing what the text says, without taking liberties and translating it into something different. This is a neutral card, so some classes will use it differently than others. We found one of the best and most fun ways to use this card was actually in Warrior, strangely. One of the coolest decks we’ve played in the Witchwood was odd quest Warrior with Baku the Mooneater, the card we revealed. Once you change your hero power, when you play the quest, you deal 8 damage. When you plop this guy down that turns into 16, which is a lot. If you manage to land one of these guys they work together in that deck to where you can do 16, refresh, and do 16 again. Which is a lot of damage. 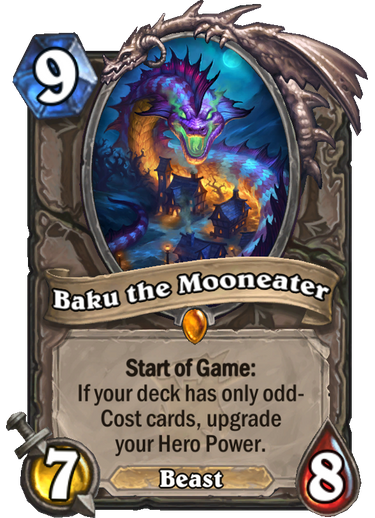 Kosak: You’d have to spread it out over a couple of turns to take advantage of the pixie.

Ayala: Yeah, you’d have to stick one of them.

GamesBeat: Unless you’re playing Wild and you have Emperor Thaurissan.

GamesBeat: Would it double the damage for Garrosh’s death knight?

GamesBeat: Would it do that also for the Malfurion Death Knight? He has an attack, so that’s not really dealing damage.

Ayala: Yeah, it wouldn’t double the attack, no.

GamesBeat: Blackwald Pixie’s ability is a Battlecry. Would Warlock draw two cards if they used it?

Ayala: You’d have to use your hero power twice, but yes.

GamesBeat: So you could make two attacks with a Wicked Knife, or your druid?

GamesBeat: So unless it’s a weapon, any ping would be something that wouldn’t happen twice. And Jaina would get a chance to use her power twice?

Ayala: I don’t think necessarily. Inspire had its own set of use cases. I think for these in particular, a lot of the sexiness of using these is for a lot of the Death Knight hero cards. When you make your hero power much more powerful, using it twice is more appealing than with one of the base hero powers. With a lot of these, you are probably going to want to be playing one of the death knights in your deck and doubling those hero powers, or playing a Baku the Mooneater deck, where you have an upgraded hero power and you can use that twice in the same turn, or double it.