Mozilla today launched Firefox 58 for Windows, Mac, Linux, and Android. The release builds on the improvements made in version 57, branded Firefox Quantum, which the company calls “by far the biggest update since Firefox 1.0 in 2004.” Version 58 brings smoother graphics rendering and faster page loading, thanks to JavaScript caching improvements, and Progressive Web Apps ( PWAs) on Android.

Firefox 58 for the desktop is available for download now on Firefox.com, and all existing users should be able to upgrade to it automatically. As always, the Android version is trickling out slowly on Google Play.

Mozilla doesn’t break out the exact numbers for Firefox, though the company does say “half a billion people around the world” use the browser. In other words, it’s a major platform that web developers have to consider.

Firefox 58 builds on the performance gains in Firefox Quantum by further improving the way the browser renders graphics (using Off-Main-Thread Painting on Windows) and caches JavaScript. In short, Firefox now has an improved engine that more efficiently paints your screen using a dedicated CPU thread.

Mozilla created a test that specifically simulates running heavy JavaScript. It found that Firefox’s frame rate has improved by 30 percent (from 31 to 40 frames per second) with this change. The next performance improvement to Firefox will come thanks to the integration of WebRender, a next-generation web page renderer developed as part of Mozilla’s Servo research project.

Mozilla today also highlighted Firefox’s Tracking Protection feature, but this is not new in Firefox 58. In fact, it was added to Firefox 42’s private browsing mode in November 2015. With the monster Firefox 57 release, Mozilla finally added an option to enable tracking protection outside of private browsing.

Tracking protection means Firefox blocks website elements (ads, analytics trackers, and social share buttons) that could track you while you’re surfing the web. It’s almost like a built-in ad blocker, though it’s really closer to browser add-ons like Ghostery and Privacy Badger because ads that don’t track you are allowed through. The feature’s blocking list, which is based on the tracking protection rules laid out by the anti-tracking startup Disconnect, is published under the General Public License and available on GitHub.

The feature got lost in all the other changes made with Firefox Quantum, so Mozilla wanted to point out that it’s great for not just privacy, but performance as well:

If you’re a web developer, more details are available for you here: Firefox 58 for developers.

The biggest addition to Firefox for Android in this release, aside from getting the same JavaScript improvements as the desktop version, is support for PWAs. In short, this means you can add websites to your Android home screen and use them like native apps.

When browsing with Firefox for Android, websites that function as PWAs will show a house-shaped button in your address bar. You can add that website as an app to your home screen by simply tapping the house-shaped button. Launching that new PWA will open it in full-screen, outside of the browser UI, and without an address bar. 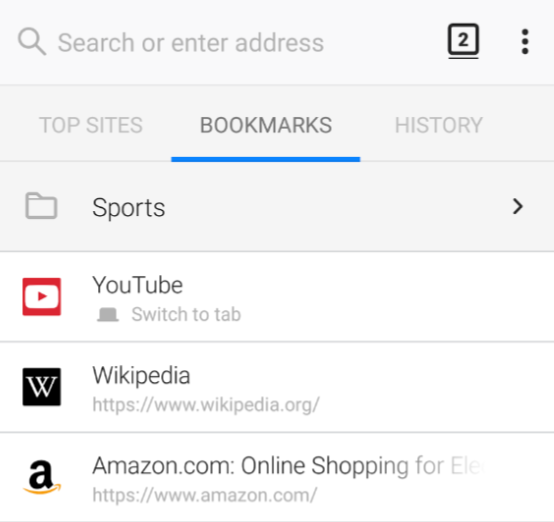 Firefox for Android has also received improvements to its bookmarking feature. Instead of a dialog box, bookmarks are now shown in a full screen, where you can create and organize them in folders.