The book was published by the UK’s Institute of Practitioners in Advertising. The IPA provided me and The Drum with a review copy prior to the EffWeek event.

According to Wood, advertising brings long-term growth primarily through creative and emotional brand building. But short-termism and media industry changes have led to a crisis in creativity that is hurting effectiveness. Over the past 30 years, western culture – from music to film to television to advertising – has moved from ‘whole-brained creativity’ to ‘left-brained creativity.’

Today’s ‘left-brain take’ has been inspired by digital technology and focuses on productivity, standardisation, repetition and risk avoidance. Advertising styles have similarly changed so that what contributes most to effectiveness is disappearing, and what works against effectiveness is commonplace.

Within the ad industry, clients now think only in the short term. Procurement is making creativity more difficult. Holding companies want to encourage greater profitability by cutting staff and increasing workloads. Specialists are prioritised over generalists. Standardisation is valued more than individualisation. Reason is more important than emotion.

“Advertising needs to entertain for commercial gain,” Wood said. “When it doesn’t, the whole advertising ecosystem runs to seed. When it does, it unlocks growth and builds reputations. This publication describes how the advertising brain turned sour – how advertising has lost its humanity – and suggests how we might make things right again.

“We now know from new research that the actual divide between the right and left brain is very real. While they don’t do different things, they do and understand things differently. Connecting with audiences requires us to appeal to their right brains. This can only be achieved by freeing our own right brain. In creative development, we must resist our instincts to analyse and devitalise. The future of advertising depends upon it.”

The power of creativity in advertising

The online marketing world came of age during the one-two punches of the dot-com crash in 2000 and the financial crisis in 2008. The events still haunt the marketing world to this day. People do not think about the long term and instead want quick, cheap ‘hacks’ today because they fear everything may fall apart again tomorrow.

So, it is no surprise that Wood found that short-termism has increased and effectiveness has decreased in advertising since 2008. 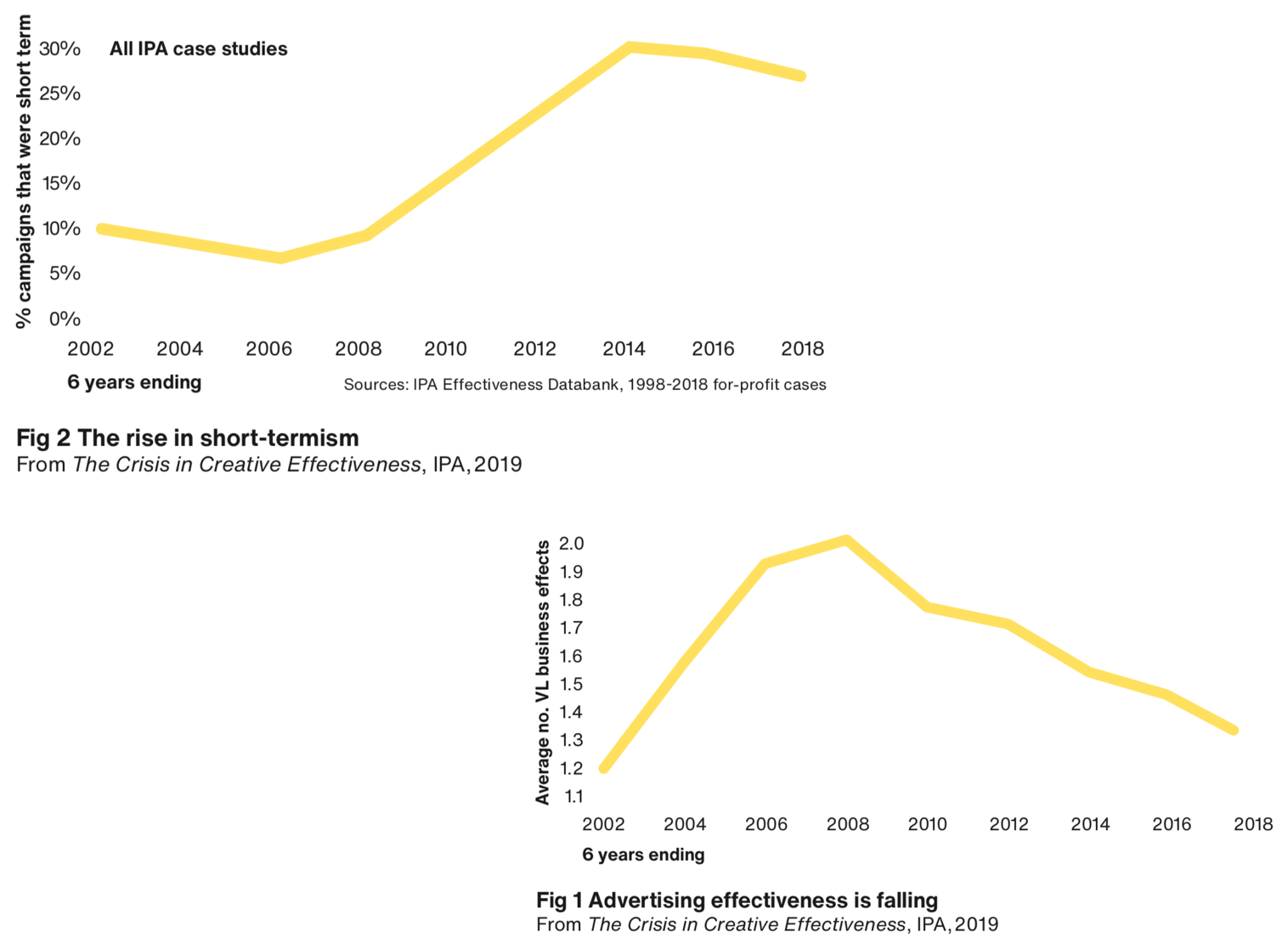 “Since 2008, advertisers have begun to spend less than necessary on brand (and more than is desirable on activation) advertising,” Wood writes. “This shift in effectiveness can be explained by a concurrent surge in short-termism, a narrowing of focus.

“Budget pressures in the wake of the downturn have also led to clients cutting budgets or reallocating them to newer, less expensive online channels whose measures of effect are geared towards the short term. The trend for companies to do more of their business online has also contributed to this short-term mentality.”

Still – and perhaps not surprisingly – Wood reports that campaigns that are emotional and run for the long term are the most effective. (For more on how to use the excess share of voice (ESOV) metric in the charts below, see my prior column on how marketers can use that measurement whenever the next recession hits.) 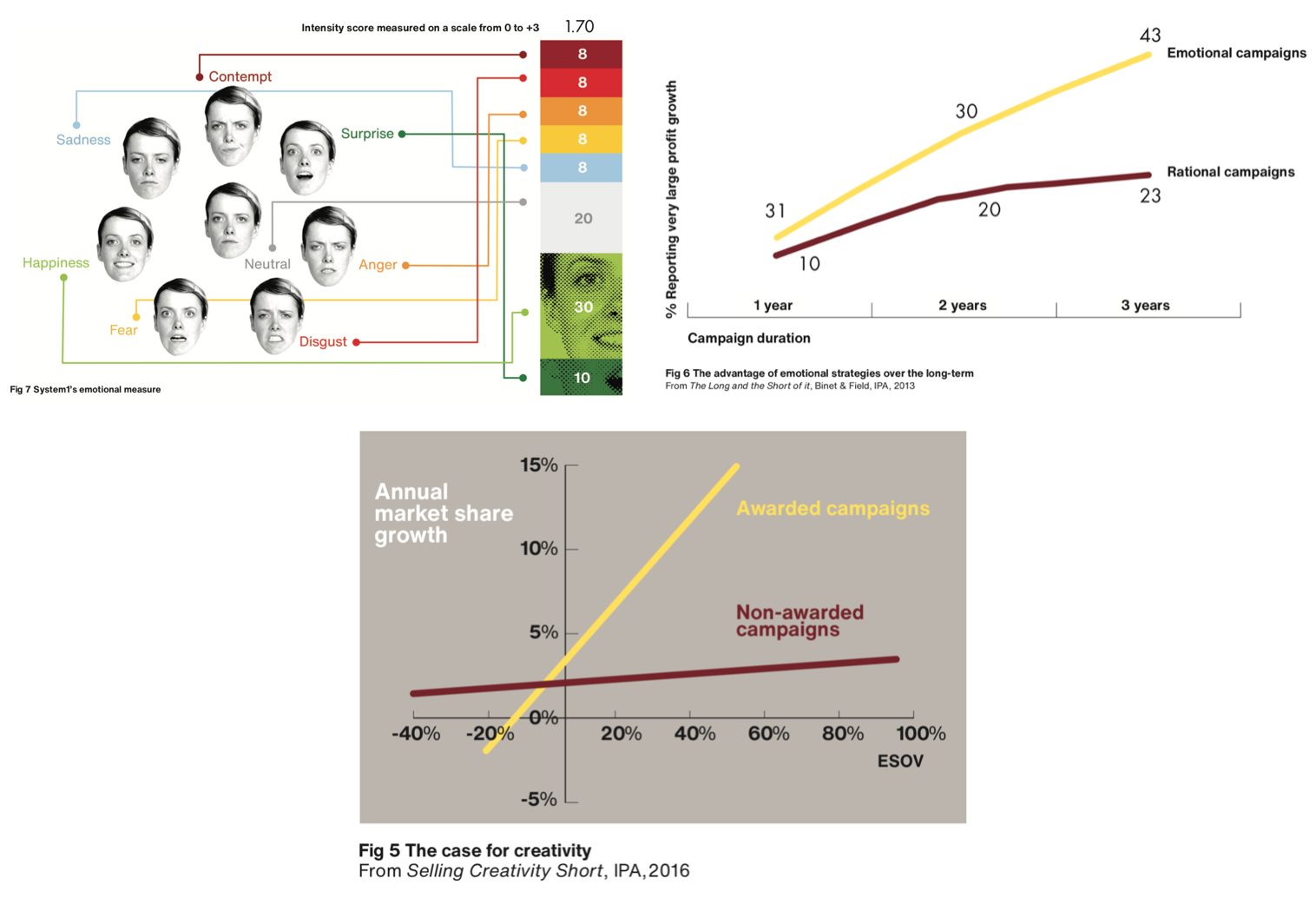 “When it comes to creative development for long-term brand building therefore, it follows that ads need to generate both a positive emotional response and offer up a distinctive hook for the audience,” Wood writes. “Long-term memories are formed through emotional response, so even if we’re not in the market for the product today, any emotional associations with the brand that are created by its advertising will stay with us, making the brand more salient to us in the future when we might then be in the market for it.

The brain’s attentional styles in history

In what may be the most controversial part of the publication because it forms the premise of the rest of the book, Wood spends the second section discussing the differences between the left and right hemispheres of the human brain.

Neither he, I assume, nor most people in the advertising industry are physiologists or psychologists – and the idea of left versus right brains has always been controversial. In addition, dualities in anything have always been overly simplistic. (Just remember the made-up conflict between Blur and Oasis in the 1990s.)

Regardless, Wood writes that the left brain favours rules, categorisation, consistency and predictability in terms of simple cause and effect. It values control, utility, clarity and certainty. The left brain cuts out anything that does not fit into the models it has created and cannot deal with ambiguity.

Wood’s most original and provocative idea is that human societies have prioritised different types of creativity at different times in history in ways that are reflected in each period’s cultural and artistic creations. The left brain is always trying to take control.

“Periods of whole-brained creativity are characterised by collaboration, community, a very broad and heightened sense of one’s time and place in the world, a sense of responsibility for one’s own actions, a fascination for difference, and a greater sense of empathy,” he writes.

“Periods of left-brained creativity are characterised by a desire for power and control, by hierarchy, rules, repetition, centralisation, standardisation, categorisation and specialisation. Society becomes rigid and brittle, those with alternative views are closed down.”

How advertising lost its humanity

Wood then argues that the western world’s cultural output – which includes advertising – has now swung back to the left-brained end of the artistic spectrum over the past 30 years.

Take music. In a prior column, I argued that optimisation is the enemy of creativity in marketing and music. Record companies now have formulas and checklists of things to include to ensure that more songs become breakaway pop hits. But the end result is that music today all sounds the same, and nothing is as creative as, say, the progressive rock of the 1970s or the new ave of the 1980s. 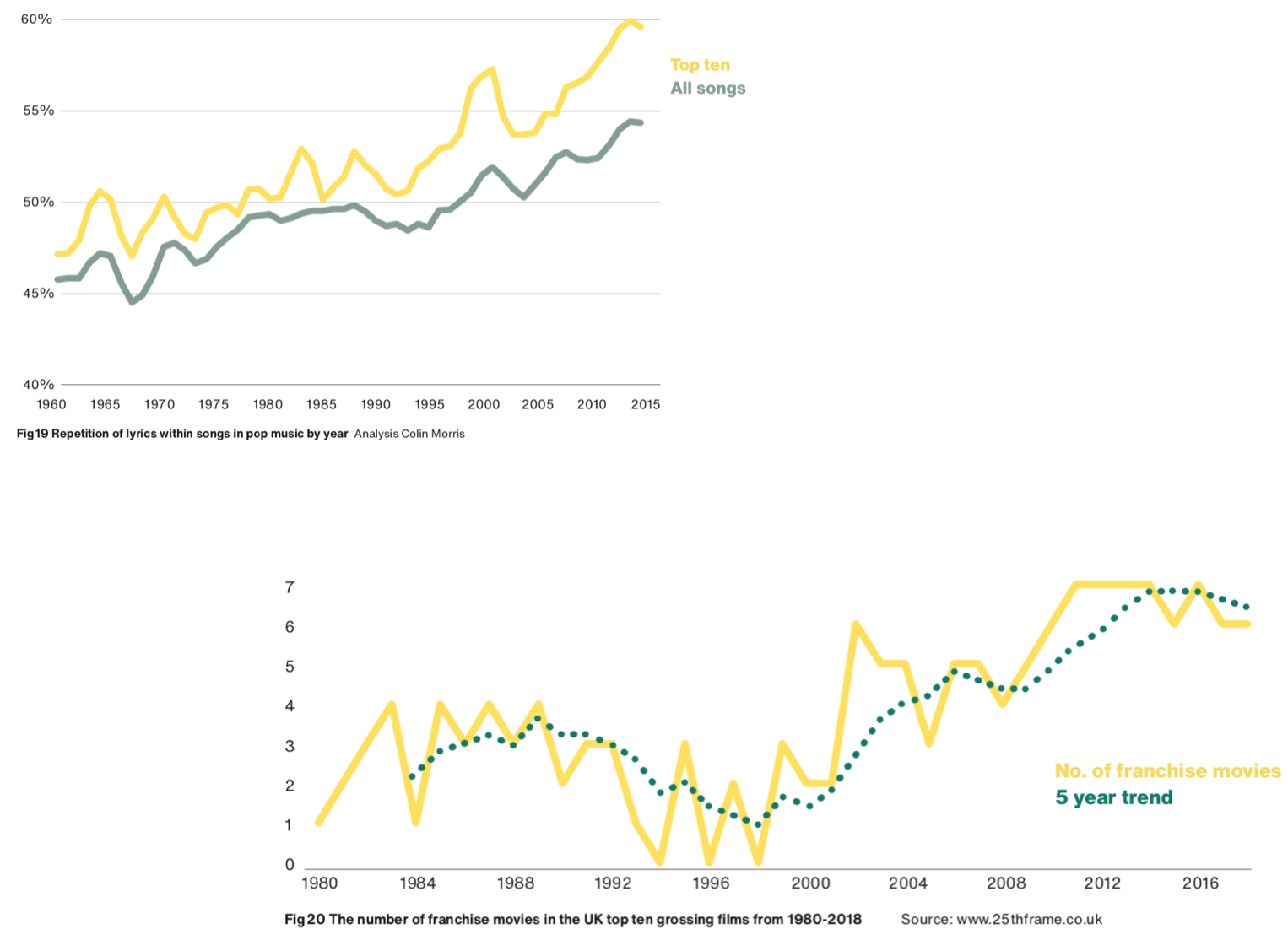 Wood finds that pop songs have tended to repeat lyrics much more often since the mid-2000s and that film companies have preferred safer franchise films rather than riskier one-off productions since 2008. 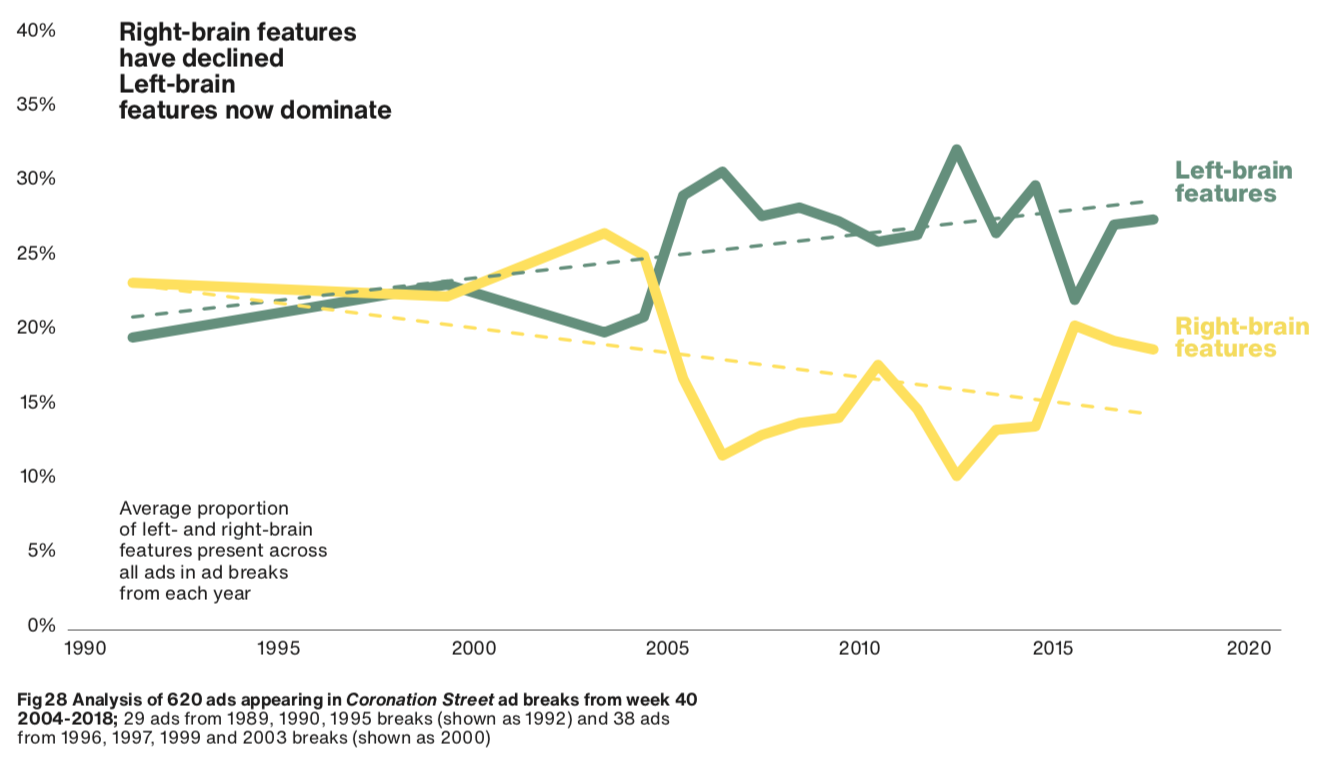 The same is supposedly true in advertising. Based on an analysis of ads during the UK TV show Coronation Street over the past thirty years, Wood reports that ‘left-brain’ advertising has become predominant since the mid-2000s.

“We’d expect it to be more goal oriented, literal, focused on things (the product) rather than people, to deliver a message and present the ‘facts’. It would look flat, have no depth or perspective, no backdrop,” Wood writes.

“People would be devitalised, expressionless, presented as statues. Because the left brain’s primary tool is language, it would feature unilateral communication – prominent voiceover, monologue to camera or regular metered prose. Words would obtrude upon the visuals, spelling out what you should be thinking and how you should be reacting to what you’re seeing. It would shun things that only the right brain understands, first and foremost the living – so no room for characters, betweenness, dialogue or drama.”

“It would restrict ambiguity, double meaning, wordplay, knowing glances, implicit connection. It would proscribe flirtation, romance and humour. It would strip back music, shun melody, harmony, full timbre or anything in the minor key. In a bid to compensate for what it had lost, it would instead feel loud and energetic. Advertising would shun metaphor – or feel the need to explain it – and undervalue awe. It would lose its self-awareness.”

And all of that, Wood argues, is making advertising less effective.

The change is affecting the entire industry

It is not just the ads. It is also the agencies that produce them. According to Wood, a left-brained culture impedes the creatives who make the campaigns.

“A creative scene is dependent on people, their relationships and a common sensibility,” he writes. “It is fragile and vulnerable to left-brain interference. It needs to be adequately funded, nurtured and protected.”

Further, Wood argues, client decision-making today is shorter-term and with a changing client base that favours short-term marketing strategies. Procurement has made the creative’s task harder by breaking their work into smaller parts, introducing processes and placing downward pressure on agency fees. Holding companies want to increase profitability through staff-cost ratios, reduced ‘heads’ and increased workloads.

Agencies are expected to be specialists in an ever-wider range of marketing fields. Specialism has been encouraged at an agency and creative-team level. Standardisation in the form of ‘the global ad’ makes it very difficult to create right-brained advertising.

The agency culture today requires a linear, analytical, left-brain thinking style. A gap has emerged between the thinking styles and values of agency employees and those of the general public. Agencies mistakenly project their own values and preferences on to their audiences.

Here is Wood’s best point. Much of marketing has indeed become ‘left brain’. As he writes: “The use of digital channels is contributing to the dominance of left-brain work.” I would add that it is especially a problem in the B2B and online marketing worlds.

Everyone wants informational ‘content writing’ rather than creative copywriting. We optimise everything to suit Google’s algorithm or maximise click-through rates but never think about creating ads that delight people. Everyone looks at ‘data’ but misses the information that actually matters. Almost all ads online are actually direct response and not advertising.

We focus on analytics dashboards and short-term even though the numbers are never accurate and never portray what happens inside people’s heads over the long term. Marketers project their desires to do ‘brand purpose’ onto consumers even though most everyday people do not care. We obsess over NPS scores even though the number is likely meaningless.

How to end the left brain’s dominance

Wood ends the new IPA publication with general principles on how both advertising can become effective again. Here are a few.

“For profit gain, speak to the right brain. Broad and long-term effects are associated with advertising that elicits happiness, that amuses, that leaves people awestruck, that plays to a connection with other people and the wider world.”

“What burns brightly, burns quickly. The desire to ‘disrupt’ in advertising is a left-brain instinct. The desire to shock and polarise opinion is a strategy geared towards the short-term.”

“There has been a decline in the use of the fluent device since the advent of online channels. This is a missed opportunity because characters get advertising noticed and watched in digital contexts, helping brands who want to use these platforms for sustained growth over the long term.”

“Relevance is not enough. For growth, you must make people feel more: entertain for commercial gain.”

Wood then closes the book with a fictional manifesto of a hypothetical ad agency that would exude those practices. Here are my favourite parts.

“We believe that advertising is a craft, not a profession. We want you to know that it takes talent and time to create extraordinary work.”

“We believe in keeping left-brain processes away from our creatives. These stifle creativity.”

“We love technology and awe-inspiring visual effects, but we believe people, betweenness, time, place, music, metaphor and humour are at the heart of great advertising.”

The Promotion Fix is an exclusive biweekly column for The Drum contributed by global marketing keynote speaker Samuel Scott, a former newspaper editor and director of marketing in the high-tech industry. Follow him on Twitter. Scott is based out of Tel Aviv, Israel.