2017 was an interesting year the cloud, one that saw both the continued power of Amazon Web Services over the industry and the success of an open-source community project that forced the market leader to follow the herd.

It’s been clear for some time that cloud computing is past the evangelical stage. Once distrusted by anyone other than startups, who didn’t have the budget to go in a different direction, cloud computing strategies are now a requirement for just about every CIO at a large or medium-size company.

This trend rewarded the existing players handsomely in 2017. The entire market is expected to grow 38 percent in 2017, according to IDC, led by Amazon Web Services and its $18 billion cloud infrastructure revenue run-rate. Microsoft Azure, Google Cloud Platform, IBM, Alibaba, and a host of others are further behind, but Microsoft and Google are growing at nearly a 100 percent clip as businesses new and old embrace the cloud. 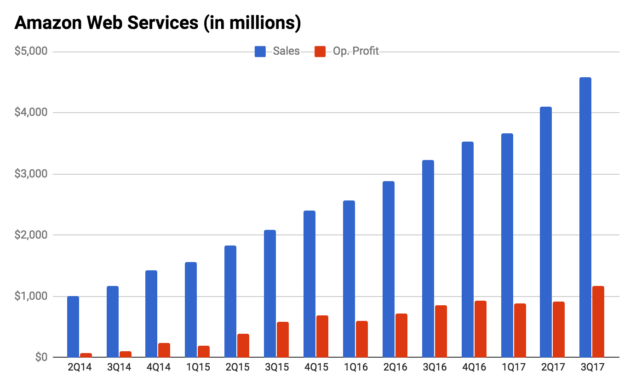 AWS continued to dominate cloud computing in 2017, as it has since it launched its first service more than a decade ago. Despite rapid growth by Microsoft and Google, Amazon’s market share doesn’t seem to have suffered, and it will end the year where it began; as the first name on the list of anyone considering a public cloud infrastructure strategy.

There’s still lots of room for everyone to grow. Cloud holdouts are starting to sign deals with more regularity, perhaps encouraged by the rollout of the first broad-based ad campaign launched by AWS in hopes of getting conservative CIOs on board with the cloud. And the competition amongst cloud vendors to introduce new services for existing customers helps increase the amount of activity on their platforms, which translates to dollars.

Yet the most prominent development of 2017 – the embrace of Kubernetes as a de facto standard for container management – points toward a future in which cloud customers hedge their bets across multiple vendors.

Getting the containers to dance

It was definitely quite the year for the backers of Kubernetes, which the industry appears to have settled on as the go-to method for managing container deployments. Containers allow software organizations to deploy their applications across multiple servers with far less overhead than virtual machines, and they have exploded in popularity as a deployment method for new cloud-native applications.

Kubernetes allows operations teams to schedule and deploy those containers in clusters, managing demand and keeping everything more or less under control. Yet Kubernetes comes with quite a learning curve, and 2017 saw Microsoft and AWS roll out managed Kubernetes services to help their customers get on board. (Google, where Kubernetes was originally developed, has offered such a service for several years.)

Thanks to the popularity of Kubernetes, the Cloud Native Computing Foundation managed to turn itself into an industry sounding board for emerging cloud-native practices. The CNCF shies away from using the term “standard,” but it was notable that a collection of open-source projects launched by Google, IBM, and Red Hat just two years ago has gained enough traction to force Microsoft and AWS to join the parade.

As the year of the container orchestration ends, however, it’s not at all clear what is going on at container pioneer Docker. The company responsible for ushering in the container revolution has been very quiet since it named enterprise software veteran Steve Singh as CEO in May.

Docker’s window of opportunity to cash in on containers might have slipped away, with the popularity of Kubernetes and the success of larger companies like Red Hat building products around Docker. And when you’ve raised as much money as Docker has, that might be a problem. The company appears to be preparing a new marketing strategy geared around enterprise support services, but 2018 could be a make-or-break year for Docker.

Despite the relatively early days of the cloud, 2017 definitely marked a year in which customers and competitors grew more wary of the power of AWS, which probably helped drive interest in Kubernetes as a tool for moving workloads between multiple public and private clouds.

One of the most interesting trends of the year was the newfound reluctance of AWS customers in the retail industry to fund the parent company that is stomping all over their core businesses. It’s hard to know how widespread this actually is, but when Walmart, Target, and Kroger are actively courting rival clouds because of concern about competition from Amazon, other companies in Amazon’s crosshairs will take notice.

It’s not at all surprising that AWS competitors would bristle at its size and reach, but the rhetoric gets a little hotter every year. CoreOS CEO Alex Polvi invoked a dirty word in enterprise computing – “proprietary” – in describing how AWS wants to entice current customers stay in its cloud with arrays of compelling services that need a lot of special custom work to use. He promised that the open-source community would find ways to get around the power of AWS.

Kubernetes is one of those tools. Despite the fact Kubernetes was conceived at Google, Microsoft made arguably the strongest moves around Kubernetes late-comers in 2017, snapping up Gabe Monroy’s Deis startup and pairing him with Kubernetes co-creator Brendan Burns to shape Microsoft’s container strategy. The company also hired several prominent open-source cloud developer advocates in 2017 to help people looking for open-source cloud tools find their way.

The rise of serverless computing, which is exciting because it allows developers to truly forget about the hardware beneath their apps and write code based around events and triggers, threatens to solve some existing computing problems by increasing one’s dependency on a single cloud vendor. It was still a little too early in 2017 to understand how this movement will affect the cloud, but AWS and Microsoft are investing a lot of time and money into building services around serverless computing.

And in the grand back-and-forth over the years between centralized computing and de-centralized computing, we started to see some movement away from the centralization of the cloud to edge computing. Edge computing, or the move to put more processing power on connected devices in industrial settings, is a reflection of the arrival of the industrial internet of things and the fact that latency between an edge device and a central data center can cause problems for real-time applications.

What’s to come in 2018? More of the same from the Big Three, for sure. Large multinational corporations looking to dump aging data centers will sign multiyear deals with their “preferred cloud providers,” and competition for cloud engineers in Seattle will become even more intense as Google expands its presence in Seattle’s South Lake Union neighborhood, a short walk from Amazon.

Legacy enterprise IT vendors like IBM, Cisco, Oracle, Dell Technologies, and HPE will continue to shuffle along, nursing older businesses along in hopes of finding a breakthrough product for the cloud era. One of them will score a very interesting and unexpected customer, and one of them will be on the rocks by the end of the year.

And the second annual GeekWire Cloud Tech Summit, scheduled for June 13 at the Meydenbauer Center in Bellevue, Wash., will be a must-attend event for anyone interested in cloud computing. We’re excited about building on the clear demand we saw last year for a vendor-agnostic cloud conference, and stay tuned for more details about this year’s version in early 2018.