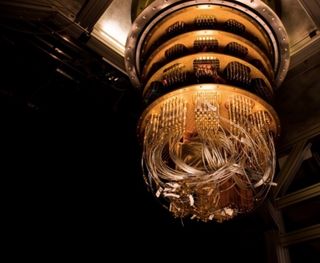 We have just entered the age of quantum supremacy, a new study suggests.

For the first time, a quantum computer has solved a problem that a traditional computer, for all practical purposes, cannot, researchers reported today (Oct. 23) in the journal Nature.

“A computation that would take 10,000 years on a classical supercomputer took 200 seconds on our quantum computer,” study co-author Brooks Foxen, a graduate student researcher in physics at Google AI Quantum in Mountain View and the University of California, Santa Barbara, said in a statement.

“It is likely that the classical simulation time, currently estimated at 10,000 years, will be reduced by improved classical hardware and algorithms, but, since we are currently 1.5 trillion times faster, we feel comfortable laying claim to this achievement,” Foxen added.

Quantum computers store information using subatomic particles, which behave according to very different rules than the ones that govern our macro world. For example, quantum particles can exist in a “superposition” of two different states at the same time, and particles can be separated by light-years yet still be “,” affecting each others’ properties.

This weirdness is key to the incredible potential power of quantum computing. Because of the superposition phenomenon, quantum computers can store and manipulate far more information per unit volume than can traditional computers, which encode information in a binary way using 0s and 1s. (The basic unit of information in a quantum-computing system, by the way, is known as a qubit, which is short for “quantum bit.”)

The new study gives us a taste of that power. The research team, led by Frank Arute of Google AI Quantum, used a quantum computer called Sycamore, which featured 53 functional qubits (plus one that didn’t work properly).

The scientists entangled those 53 qubits into a complex superposition state, then had Sycamore perform a task akin to random-number generation. The results were then compared with simulations run on the Summit supercomputer at Oak Ridge National Laboratory in Tennessee.

“Summit is currently the world’s leading supercomputer, capable of carrying out about 200 million billion operations per second,” William Oliver, a physicist at the Massachusetts Institute of Technology, wrote in an accompanying “News and Views” piece in the same issue of Nature.

“It comprises roughly 40,000 processor units, each of which contains billions of transistors (electronic switches), and has 250 million gigabytes of storage. Approximately 99% of Summit’s resources were used to perform the classical sampling,” added Oliver, who was not involved in the new study.

As Foxen noted, Sycamore finished in about 3.5 minutes, and the Summit work suggested that even the most powerful traditional supercomputer would have to chew on the problem for about 10,000 years.

“This demonstration of quantum supremacy over today’s leading classical algorithms on the world’s fastest supercomputers is truly a remarkable achievement and a milestone for quantum computing,” Oliver added. “It experimentally suggests that quantum computers represent a model of computing that is fundamentally different from that of classical computers. It also further combats criticisms about the controllability and viability of quantum computation in an extraordinarily large computational space (containing at least the 253 states used here).”

(Not everyone agrees that the new paper does indeed report “supremacy,” however. For example, researchers from IBM argue that the task performed by Sycamore is well within a classical computer’s reach. “We argue that an ideal simulation of the same task can be performed on a classical system in 2.5 days and with far greater fidelity,” three IBM scientists wrote in a blog post on Oct. 21. “This is in fact a conservative, worst-case estimate, and we expect that with additional refinements the classical cost of the simulation can be further reduced.”)

Oliver also stressed, however, that considerable work still needs to be done before quantum computers can become an important part of our everyday lives. For example, he wrote, researchers will have to develop new algorithms that can work with the error-prone quantum processors that will be available in the near future. And, to make the technology commercially viable over the long haul, scientists will have to devise robust protocols for correcting quantum errors.

Editor’s note: This story was updated on Oct. 24 to include thoughts from IBM scientists who don’t think the new study demonstrates quantum supremacy.