AUSTIN, Texas — Data centers are about to get smaller. Like, a lot smaller. Shipping container vs. Costco warehouse smaller.

If these new mini data centers really catch on, edge computing will become a real trend, upending today’s communications networks and changing the Internet itself.

At least, that was narrative here at the Edge Global Congress show this week.

Edge computing gets real
EdgeMicro is one of several startups that is in the process of deploying real, live, commercial mini data centers for edge computing. Last week the company announced its first three commercial installations, in Austin, Texas; Raleigh, N.C.; and Tampa, Fla. In fact, the company’s Austin location was conveniently just a few blocks away from where the Edge Global Congress trade show was held. 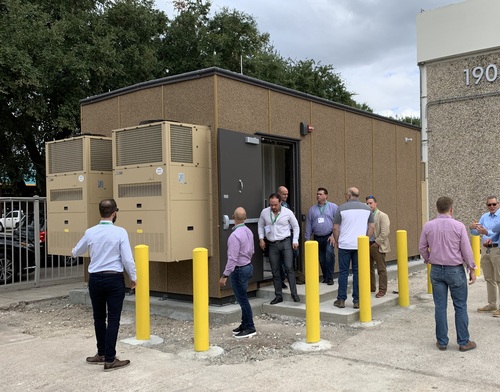 The site is so new that some of the paint on the yellow barriers surrounding it was still wet during a recent visit.

EdgeMicro’s new edge computing sites are generally the size of a large bedroom (or small New York City apartment). They’re just the right size to fit on the back of an 18-wheeler — a critical feature if such data centers are to spread. That’s minuscule when compared with the standard data center warehouses operated by the likes of Equinix, Flexential or Digital Realty.

Big, conventional data centers sometimes span hundreds of thousands of square feet and require dozens of megawatts of electricity, massive air conditioning systems to keep thousands of high-end computers cool, and security systems that in some cases put the White House to shame.

A visit to one of these kinds of data centers can be overwhelming, and frankly a little disheartening, as the computers that live in them are given more care and attention than some of the world’s humans.

A fix for the Internet?
The Internet and cloud computing gave birth to these types of sprawling facilities, given the need to centralize computing resources for efficiency. But growing demand for near-instantaneous computing — which covers everything from speedy Siri responses to drone navigation to online video game streaming — is highlighting the drawbacks inherent in the centralization of communications networks and Internet computing. That’s because the time it takes for a computing request to travel from a user through a network to one of these far-flung data centers can mean the difference between an enjoyable, immersive VR experience and a nausea-inducing one, if a user’s movements don’t track in real time with the virtual reality they’re seeing.

“The Internet is broken,” said Vapor IO’s CEO Cole Crawford, arguing that the complexities around Internet traffic routing are only going to get worse.

The solution, according to Crawford and others, is computing at the “edge,” or in locations physically closer to a user. Doing so reduces “latency,” or the time it takes for a user’s request to travel through a network to a computer that can answer it. Edge computing can also lead to a lot of other benefits, such as reducing the costs associated with transmitting lots of data across communications networks, creating more security around how and where data is stored, and potentially setting the stage for the creation of new services.

This potential opportunity is attracting interest from a wide range of players, from CDNs like Akamai to data center companies like Equinix to infrastructure providers like Ericsson to private equity firms like EQT to silicon vendors like Intel to tower companies like SBA to Internet providers like CenturyLink and Verizon to startups like EdgeMicro and Vapor IO. Indeed, both EdgeMicro and Vapor this month disclosed their first mini data center deployments for edge computing.

Importantly, both companies are also advertising the exact locations and capabilities of their mini edge computing data centers. For example, Vapor said it counts two sites in Pittsburgh each supporting 150kW of computing power.

And both Vapor and EdgeMicro are promising dozens more installations in the coming months, mostly in so-called “tier 2” and “tier 3” US cities, where there aren’t a lot of data centers already.

To be clear, Vapor and EdgeMicro aren’t alone. There are a large and growing number of companies — including EdgePresence, DartPoints, EdgeConneX, Compass Data Centers, Axellio, MetroEdge, Zellabox and others — on the edge computing bandwagon. Many of these companies argue they already provide computing resources in dozens or hundreds of locations across the US. But many are not providing the basic details that would be necessary to evaluate their intentions.

“We keep things close to the vest,” wrote a spokesperson from DartPoints in response to questions from Light Reading about the locations of its mini data centers. “However, I can share with you that we’ve had operational micro edge data centers (with paying customers) since 2013. We also have ongoing deployments in several markets, which we will publicly announce when we feel the time is right.”

This is why the recent announcements by Vapor and EdgeMicro are so noteworthy. These are startups specifically founded for edge computing that have not only raised enough money to build edge computing data centers, they’re also hanging a very public “space available” sign outside their new installations in the hopes of enticing customers to rent computing space in them.

He predicted that the situation will reverse itself starting in 2021, when demand for edge computing will begin to catch up to the development of edge computing locations.

Not surprisingly, companies in the edge computing space are only too happy to list the “use cases” that will drive demand for edge computing facilities, whether it’s questionable ones like autonomous driving (where a nearby edge data center would control a driverless car) or imminent, real-world ones like multiplayer online video gaming (where games are streamed to players from nearby edge data centers). Indeed, EdgeMicro executives boasted that the company generally constructs mini edge data centers in locations where it has already signed up customers for at least a third of its total available computing resources.

Nonetheless, there’s plenty of skepticism surrounding the sector. For example, Rob Hirschfeld, CEO of data center consulting company RackN, said that an unmanned mini data center for edge computing might make sense in parts of the US, but leaving $100,000 worth of computing equipment without some kind of guard is untenable in places like India.

And Harry Smeenk, SVP of technology and programs at the Telecommunications Industry Association, said that one of his biggest concerns related to edge computing is whether someone will be able to tie a rope around a mini data center in a rural location and just drive away with it.

The 5G factor
Edge computing is often tied to 5G, and while they’re certainly complementary the two technologies aren’t necessarily reliant on each other. That said, the virtualization of networking technology via initiatives like network functions virtualization (NFV) and open RAN will likely drive 5G operators to invest in the construction of computing facilities all across the country to run their virtualized network equipment.

And those facilities could also be used for a wider edge computing play.

Moreover, wireless carriers like AT&T and Verizon have a trump card when it comes to 5G and edge computing because they control the routing of traffic on their mobile networks, including their nascent 5G networks. As a result, mobile operators must sign off on the “local breakout” of 5G traffic originating in Albuquerque, for example, for any edge computing service in the city. If they don’t, that traffic will by default go to the Internet Exchange Point (IXP) in Dallas, for example, before it can go anywhere else. That kind of default routing — from Albuquerque to Dallas and back to an edge computing site in Albuquerque — would create enough latency to forestall real-time service like VR.

That’s not how things work for wireline operators like CenturyLink and Comcast, which do sell connections onto the Internet but don’t necessarily have control over whether the traffic from an enterprise customer on the East Coast is routed through Dallas or Salt Lake City on its way to the West Coast.

Mobile operators are well aware of the leverage they have in edge computing and 5G. And they’re probably going to cling tightly to that leverage, considering they feel like they gave up profits to “over the top” Internet companies such as Netflix and Amazon during the eras of 3G and 4G.

A land grab
All this takes us back to Badri, the Credit Suisse analyst, who predicted that the edge computing space will take off starting in 2021. That’s about the time he expects cable and mobile operators to begin widespread deployments of virtualized network services.

And at that time, those telecom companies are going to be faced with a choice: Should they build their own computing facilities, or should they rent space in facilities that are already available?

The answer to that question will mean a lot to edge computing companies like EdgeMicro and Vapor IO that are in the midst of building mini data centers ideal for just that purpose. If operators like AT&T and Verizon decide to simply make use of existing facilities, they could ultimately become big customers for these kinds of startups.

It’s that tantalizing proposition that’s helping to drive some of these early deployments of mini data centers. The great land grab for edge computing real estate (locations that offer the right mix of power and Internet connectivity) has begun.

And what will happen after that? Based on the large and growing number of companies selling software to manage edge computing ( MobiledgeX, Fastly, AlefEdge, Stackpath and Mutable are just a few) it will probably center on which company can best “sell” edge computing. According to RackN’s Hirschfeld, it’s a good bet that today’s cloud computing providers (think Amazon and Microsoft) will be the most aggressive competitors in that space.