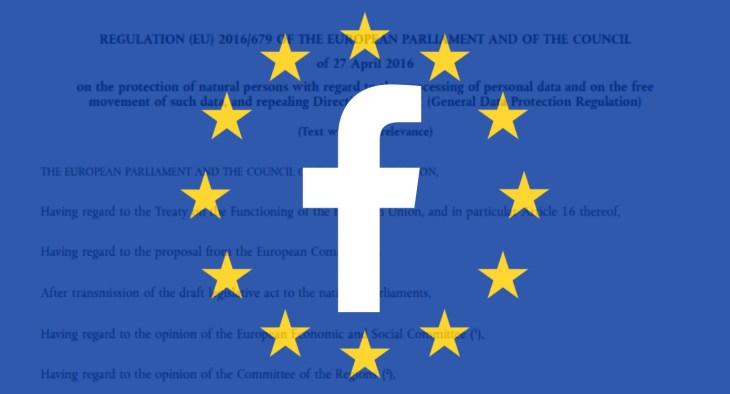 Facebook is about to start pushing European users to speed through giving consent for its new GDPR privacy law compliance changes. They ask users review how Facebook uses data around the web to target you with ads, sensitive profile info they share, and facial recognition But with a design the encourages rapidly hitting the “Agree” button, a lack of granular controls, a laughably cheatable parental consent request for teens, and an aesthetic overhaul of Download Your Information that doesn’t make it any easier to switch social networks, Facebook shows it’s still hungry for your data. 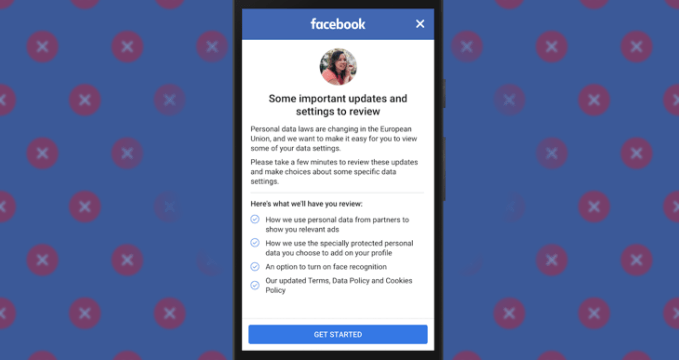 The new privacy change and terms of service consent flow will appear starting this week to European users, though they’ll be able to dismiss it for now, at least until the May 25th GDPR compliance deadline Facebook vowed to uphold in Europe. Meanwhile, Facebook says it will roll out the changes and consent flow globally over the coming weeks and months, though with some slight regional differences. And finally, all teens worldwide that share sensitive info will have to go through the weak new parental consent flow.

Facebook brought a group of reporters to the new Building 23 at its Menlo Park headquarters to preview the changes. But feedback was heavily critical as journalists grilled Facebook’s deput chief privacy officer Rob Sherman. Questions centered around how Facebook makes accepting the updates much easier than review or changing them, but Sherman stuck to talking points about how important it was to give users choice and information.

“Trust is really important and it’s clear that we have a lot of work to do to regain the trust of people on our service” he said, giving us deja vu about Mark Zuckerberg’s testimonies before congress. “We know that people won’t becomfortable using facebook if they don’t feel that their information is protected.”

Trouble At Each Step Of Facebook’s Privacy Consent Flow

There are a ton of small changes so we’ll lay out each with our criticisms.

Facebook’s consent flow starts well enough with the screen above offering a solid overview of why it’s making changes for GDPR and what you’ll be reviewing. But with just an ‘X’ up top to back out, it’s already training users to speed through by hitting that big blue button at the bottom.

First up is control of your sensitive profile information, specifically your sexual preference, religious views, and political views. As you’ll see at each step, you can either hit the pretty blue “Accept And Continue” button regardless of whether you’ve scrolled through the information. But if you hit the ugly grey “Manage Settings” button, you have to go through an interstitial where Facebook makes it’s argument trying to deter you from moving the info before letting you make and save your choice. It feels obviously designed to get users to breeze through it by offering no resistance to continue, but friction if you want to make changes. 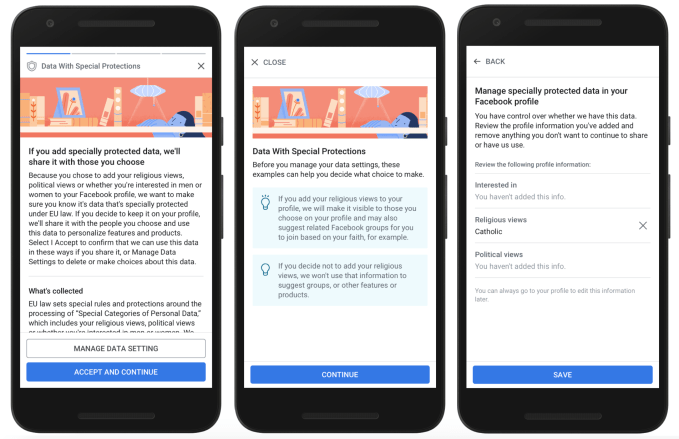 Facebook doesn’t let advertisers target you based on this sensitive info, which is good. The only exception is that in the US, political views alongside political Pages and Events you interact with inform your overarching personality categories that can be targeted with ads. But your only option here is either to remove any info you’ve shared in these categories so friends can’t see it, or allow Facebook to use it to personalize the site. There’s no option to keep this stuff on your profile but not let Facebook use it.

The Face Recognition step won’t actually give users in the European Union a choice, as the government has banned the feature. But everyone else will get to choose whether to leave their existing setting, which defaults to on, or turn off the feature. Here the lack of granularity is concerning. Users might want to see warnings about possible impersonators using their face in their profile pics, but not be suggested as someone to tag in their friends’ photos. Unfortunately, it’s all or nothing. While Facebook is right to make it simple to turn on or off completely, granular controls that unfold for those that want them would be much more empowering. 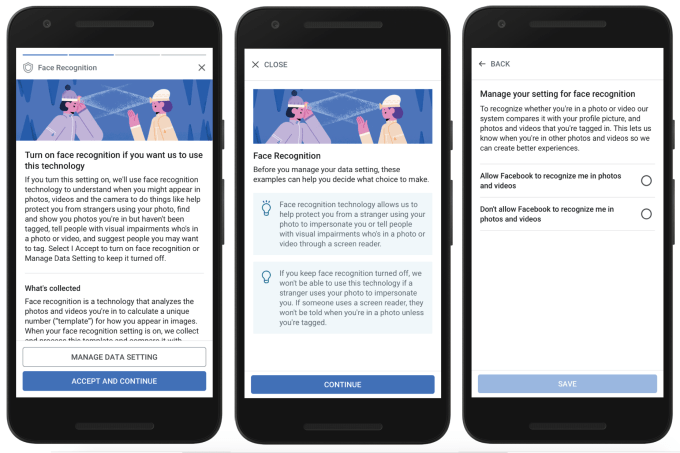 Data Collection Across The Web 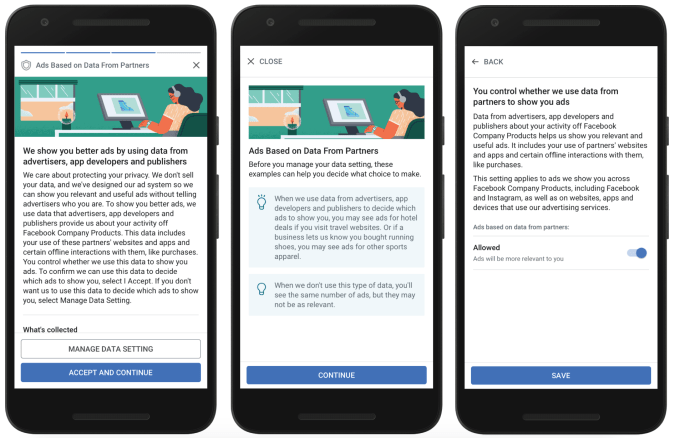 A major concern that’s arisen in the wake of Zuckerberg’s testimonies is how Facebook uses data collected about you from around the web to target users with ads and optimize its service. While Facebook deputer chief privacy officer Rob Sherman echoed Zuckerberg in saying that users tell the company they prefer relevant ads, and that this data can help thwart hackers and scrapers, many users are unsettled by the offsite collection practices. Here, Facebook lets you block it from targeting you wih ads based on data about your browsing behavior on sites that show its Like and share buttons, conversion Pixel, or Audience Network ads. Here the issue is that there’s no way to stop Facebook from using that data from personalizing your News Feed or optimizing other parts of its service. 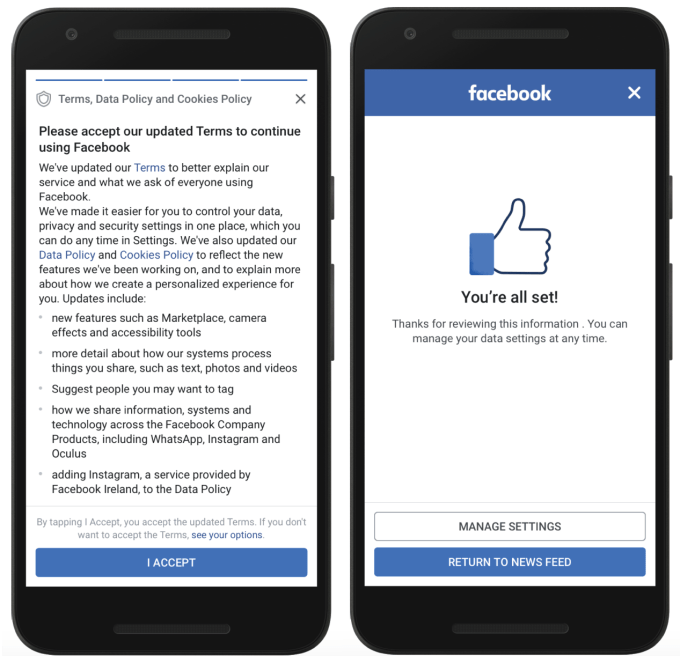 Facebook recently rewrote its Terms Of Service and Data Use Policy to be more explicit and easy to read. It didn’t make any significant changes other than noting the policy now applies to its subsidiaries like Instagram, WhatsApp, and Oculus. That’s all clearly explained here, which is nice. But the fact that the button to reject the new Terms Of Service isn’t even a button, it’s a tiny ‘see your options’ hyperlink shows how badly Facebook wants to avoid you closing your account. When Facebook’s product designer for the GDPR flow was asked if she thought this hyperlink was the best way to present the alternative to the big ‘I Accept’ button, she disingenuously said yes, eliciting scoffs from the room of reporters. It seems obvious that Facebook is trying to minimize the visibility of the path to account deletion rather than making it an obvious course of action if you don’t agree to its terms. 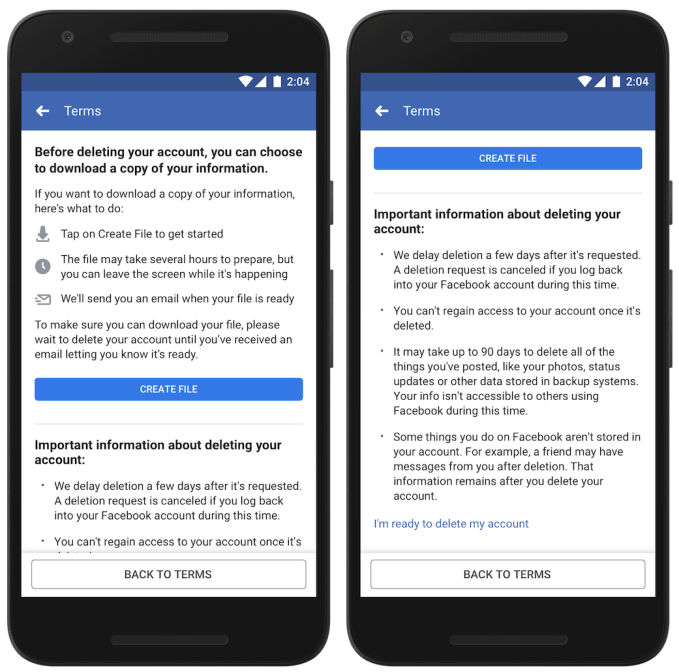 I requested Facebook actually show us what was on the other side of the that tine ‘see my options’ link and this is what we got. First, Facebook doesn’t mention its temporary deactivation option, just the scary permanent delete option. Facebook recommends downloading your data before deleting your account, which you should. But the fact that you’ll have to wait (often a few hours) before you can download your data could push users to delay deletion and perhaps never resume. And only if you keep scrolling do you get to another tiny “I’m ready to delete my account” hyperlink instead of a real button.

GDPR also implements new regulation about how teens are treated, specifically users between the ages of 13 (the minimum age required to sign up for Facebook) and 15. If users in this age range have shared their religious views, political views, or sexual preference, Facebook requires them to either remove it or get parental consent to keep it. But the system for attaining and verifying that parental consent is a joke. 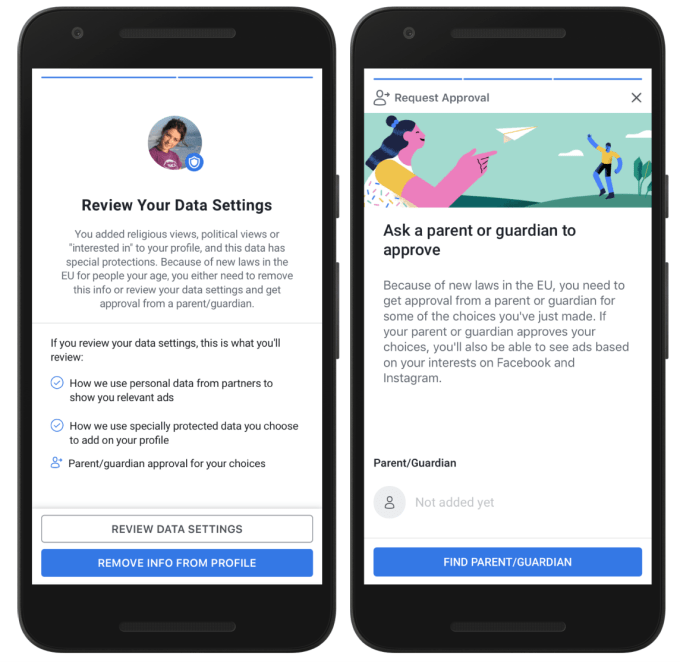 Users merely select one of their Facebook friends or enter an email address, and that person is asked to give consent for their ‘child’ to share sensitive info. But Facebook blindly trusts that they’ve actually selected their parent or guardian, even though it has a feature for users to designate who their family is, and the kid could put anyone in the email field, including an alternate address they control. Sherman says Facebook is “not seeking to collect additional information” to verify parental consent, so it seems Facebook is happy to let teens easily bypass the checkup.

To keep all users abreast of their privacy settings, Facebook has redesigned its Privacy Shortcuts in a colorful format that sticks out from the rest of the site. No complaints here. 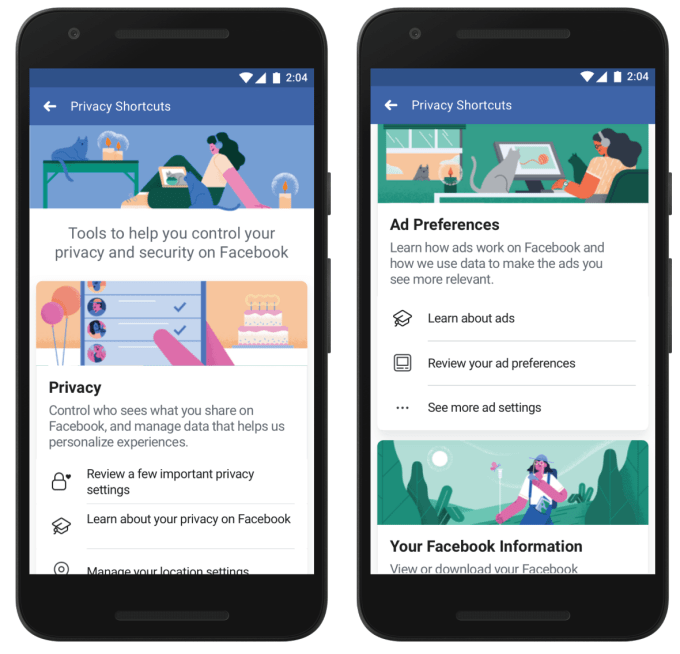 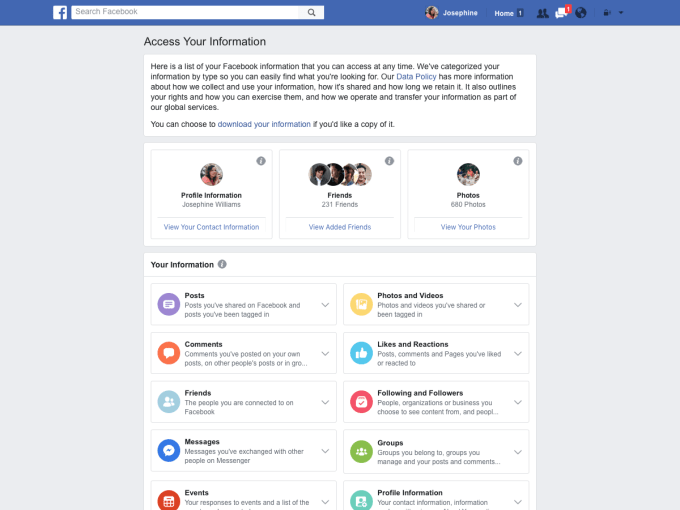 Facebook has completely redesigned its Download Your Information tool after keeping it basically the same for the past 8 years. You can now view your content and data in different categories without downloading it, which alongside the new privacy shortcuts is perhaps the only unequivocally positive and unproblematic change amidst today’s announcements.

And Facebook now lets you select certain categories of data, date ranges, JSON or HTML format, and image quality to download. That could make it quicker and easier if you just need a copy of a certain type of content but don’t need to export all your photos and videos for example. Thankfully, Facebook says you’ll be able to now export your media in a higher resolution than the old tool allowed. 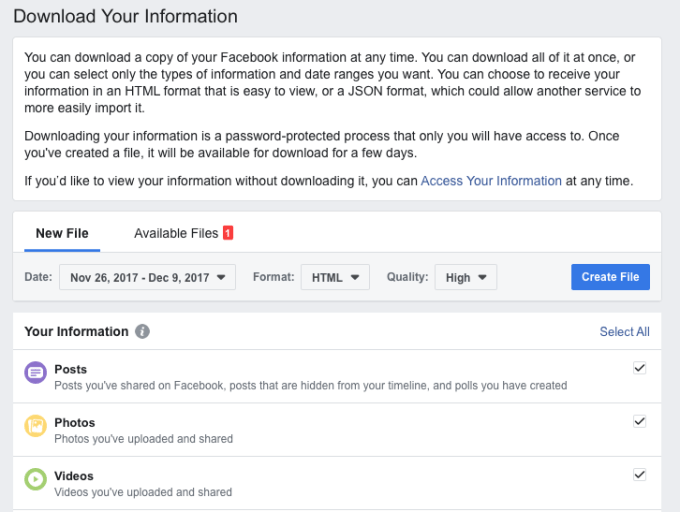 But the big problem here was the subject of my feature piece about Facebook’s lack of data portability. The Download Your Information tool is supposed to let you take your data and go to a different social network. But it only exports your social graph aka your friends as a text list of names. There are no links, usernames, or other unique identifiers unless friends opt into let you export their email or phone number, so good luck finding the right John Smith on another app. The new version of Download Your Information works exactly the same, rather than offering any interoperable format that would let you find your friends elsewhere.

Overall, it seems like Facebook is complying with the letter of GDPR law, but with questionable spirit. Sure, privacy is boring to a lot of people. Too little info and they feel confused and scared. Too many choices and screens and they feel overwhelmed and annoyed. Facebook struck the right balance in some places here. But the subtly pushy designs seem intended to push people away from changing their defaults in ways that could hamper Facebook’s mission and business. 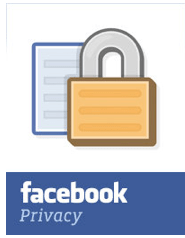 Making the choices even in visible weight, rather than burying the ways to make changes in grayed-out buttons and tiny links, would have been more fair. And it would have shown that Facebook has faith in the value it provides, such that users would stick around and leave features enabled if they truly wanted to.

When questioned about this, Sherman pointed the finger at other tech companies, saying he thought Facebook was more upfront with users. Asked to clarify if he thought Facebook’s approach was “better”, he said “I think that’s right”. But Facebook isn’t being judged by the industry standard because it’s not a standard company. It’s built its purpose and its business on top of our private data, and touted itself as a boon to the world. But when asked to clear a higher bar for privacy, Facebook delved into design tricks to keep from losing our data